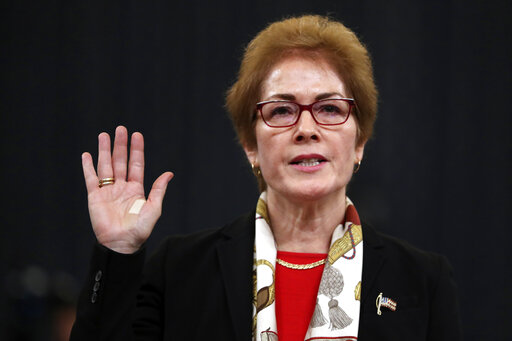 Former U.S. ambassador to Ukraine Marie Yovanovitch might have been the only witness in Friday’s impeachment hearing, but she was upstaged by a tweet from President Donald Trump.

Soon after she began, Trump disparaged her.

“Everywhere Marie Yovanovitch went turned bad,” Trump wrote Nov. 15. “She started off in Somalia, how did that go? Then fast forward to Ukraine, where the new Ukrainian President spoke unfavorably about her in my second phone call with him.”

There’s no evidence that Yovanovitch, who was a low-level staffer on her first foreign posting in Somalia in the late 1980s, played a role in that country’s civil war. We rated Trump’s statement Pants on Fire.

But Trump’s tweet prompted Intelligence Committee Chairman Adam Schiff, D-Calif., to jump in, read the tweet and ask Yovanovitch what she thought about it.

That led Schiff to say “some of us here take witness intimidation very, very seriously.”

Here were other notable moments.

Not the first Trump surprise for Yovanovitch

Yovanovitch said in Ukraine, she was the victim of a smear campaign by Trump’s lawyer Rudy Giuliani and discredited Ukrainian officials.

She first heard rumors of their moves to discredit her in late 2018. At the end of March 2019, The Hill ran an interview with then-top Ukrainian prosecutor Yuriy Lutsenko, in which he accused her of giving him a list of people he should not prosecute. Lutsenko later walked that back, saying he had written the list.

By May, she was gone.

She said she was never given any reason for her dismissal except that Trump had lost confidence in her. She said she was “shocked, appalled, devastated” when she saw that he referred to her as “bad news” in his July 25 phone call with Ukraine President Volodymyr Zelensky. Trump added, “she’s going to go through some things.”

“I couldn’t believe that the president of the United States would talk about any ambassador like that to a foreign head of state,” Yovanovitch said.

She said the color drained from her face as she read those words.

Trump had floated the idea that it might be best to recognize Russia’s annexation of the Crimean Peninsula.

Trump’s words, the ambassador wrote, “raised serious concerns in Kyiv and beyond Ukraine. Many in Ukraine are unsure what to think.”

Seen through Ukrainian eyes, Yovanovitch said, that was not an attack on Trump. It reflected the strong Ukrainian belief that its territory had been invaded, and it needed American support to withstand Russian aggression.

She said the issue of Ukrainian opposition to Trump did not come up during the time she was his ambassador in Ukraine.

Yovanovitch said the topic of former Vice President Joe Biden’s son and his seat on the board of a Ukrainian energy company came up as she prepared for her 2016 confirmation hearing to serve as ambassador to Ukraine. The administration’s briefing book included a long list of questions she might be asked.

Among them was Hunter Biden. The suggested response was to refer senators at the hearing to contact the vice president’s office.

Yovanovitch said in her opening testimony that the matter never came up in her dealings with Biden.

“Although I have met former Vice President Biden several times over the course of our many years in government, neither he nor the previous administration ever raised the issue of either Burisma or Hunter Biden with me,” she said.

Republicans emphasized that Trump, unlike President Barack Obama, cleared the delivery of lethal weapons to Ukraine. Yovanovitch said that selling Ukraine Javelin anti-tank missiles was an important step, partly to deter the use of tanks in the disputed zones in Eastern Ukraine, but even more so as a symbol of American political support.

The Javelin sale had been put on hold, along with the rest of a nearly $400 million aid package. Yovanovich said that delay was counterproductive.

RELATED STORY: The Ukraine aid that Donald Trump froze in one chart

“When then this year there are questions as to whether or not our security assistance is going to go through, that kind of undermines that strong message of support,” she said.