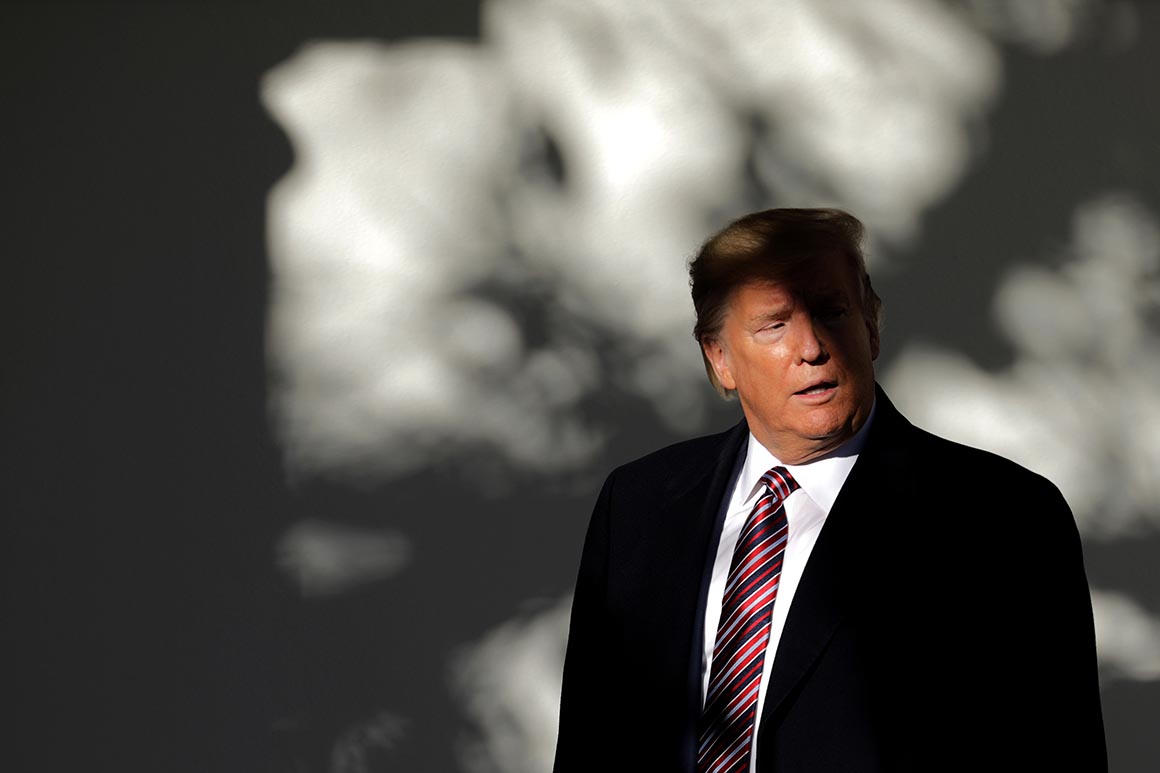 People close to Trump say he would never actually allow NAFTA to expire heading into reelection, given the impact on supply chains, particularly in critical swing states in the industrial Midwest. But no one is certain what Trump will do if Democrats decide it’s in their political interest to stall USMCA as the election approaches. Trump could decide blaming Democrats on NAFTA and continuing to fight with Beijing are political winners for him.

The White House has been increasingly aggressive in attacking Pelosi over the USMCA deal in recent days. Trump recently complained that the deal is “sitting on Pelosi’s desk” and that she is “incapable of moving it.”

On China, the two sides continue to negotiate toward a potential mini-deal that would at least forestall new tariffs scheduled to go into effect in mid-December. Senior White House advisers say a deal remains very close after a recent phone call between the two sides. The Chinese are also once again making positive noises.

But differences remain on exactly which tariffs would be removed and what kind of changes the Chinese will agree to on intellectual property theft, forced technology transfer and other critical issues. The pro-Hong Kong democracy bill that Trump signed Wednesday also complicates the trade talks.

Meanwhile, markets continue to move ahead under the expectation that a China deal will get done and USMCA will ultimately pass. Failure of one or both could trigger a serious decline on Wall Street, analysts warn. At a rally in Florida on Tuesday, Trump once again heralded the recent run of market records — but those are all at risk if the China deal and new NAFTA fizzle.

“I don’t think investors understand that the levels of ‘uncertainty’ are totally unprecedented according to many measures,” said Richard Bernstein, the veteran Wall Street analyst and founder of RBAdvisors. “We are in uncharted territory and the economy is accordingly slowing and [capital expenditure] is weak because risk premiums are higher than normal.”

The picture is darker in manufacturing which has been declining for three straight months, with global trade uncertainty cited is the key factor. Business investment spiked in late 2017 and early 2018 after Trump and the GOP slashed corporate rates and made other changes to encourage spending on new plants and equipment. But it’s mostly declined since then.

Economists argue that the U.S. economy is big enough and diverse enough to continue to muddle along at close to 2 percent growth as long as employment gains continue and wages keep rising steadily.

Recent talk of possible recession in 2020 has largely died down. But it could flare up again in a significant way if Trump fails on both the USMCA and China. That would not only complicate matters for business executives deciding where and how to allocate capital but would hit both producers and consumers with new tariffs.

“If we see China tensions ramp up again on the trade front and moving further into more non- tariff barriers, from China in particular but also from the U.S., you could see a much bigger hit to confidence levels on business and supply chains that are already being challenged,” said Beth Ann Bovino, chief U.S. economist at S&P Global. “Then if NAFTA gets ripped up, the impact would be somewhere around 200,000 lost jobs. And the 2020 recession odds we have now around 25 to 30 percent would certainly worsen and we’d be lucky to get 2 percent growth.”

A 2 percent or worse economy, in which job growth, manufacturing and capital expenditures are all slowing is not one that a president — already facing likely impeachment in the House and the drama of a trial in the Senate — is likely to be able to navigate to victory, even his closest advisers concede.

Trump’s strongest numbers continue to be on the economy, where a recent CNN survey put his approval rating at 55 percent, a factor tied to the low jobless rate and high stock prices. But his overall approval rating was at just 42 percent, a weak number for an incumbent.

That means Trump can’t really afford for the two remaining big-ticket items on his economic policy list — USMCA and a China deal — to fall to defeat in ways that could dent his best reelection argument: “You may not like me, but your life is getting better.”

And if all of that falls apart, investors fear a downward spiral in markets they’ve long considered frothy.

Under this scenario, Trump’s big agenda items fail, he looks even more vulnerable to defeat and businesses begins to worry that a progressive Democrat like Sen. Elizabeth Warren (D-Mass.) or even former Vice President Joe Biden could win and seek to unwind Trump’s tax cuts and deregulation, causing a further pullback in business activity that makes the 2020 economy even worse for the incumbent.

“Let’s say there is a one-in-three chance of them winning, you’d think markets would begin pricing that risk in and so far they haven’t don’t that,” said Moore. “That may be the biggest risk, that Trump faces a negative feedback loop if markets think Warren or Bernie Sanders or someone like that could be president. That’s the death spiral for him.”