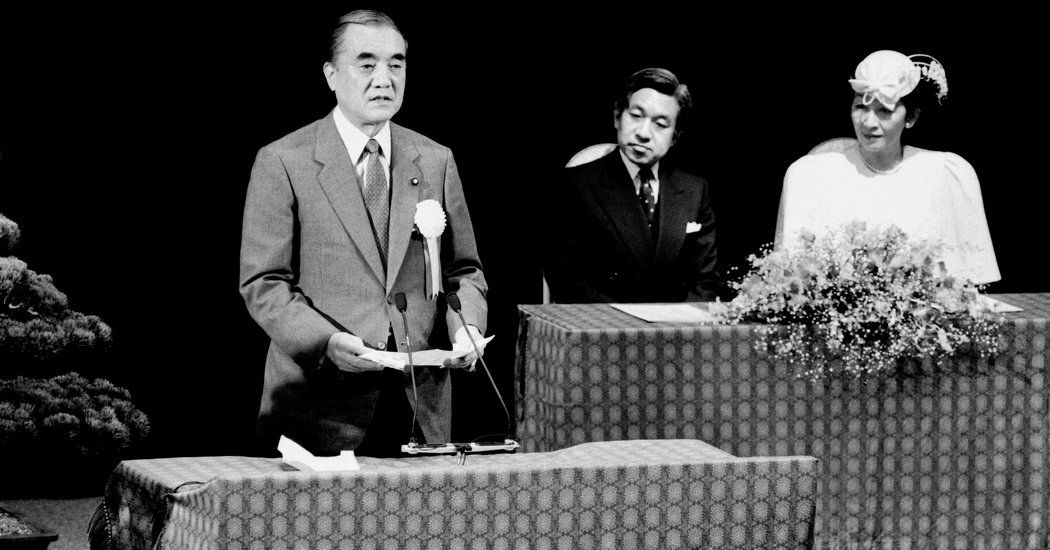 Yasuhiro Nakasone, the former prime minister of Japan who entered politics during the post-World War II American occupation of his country and spent the rest of his career championing the re-emergence of a more assertive and independent nation, died on Friday. He was 101.

Mr. Nakasone’s office confirmed his death, which took place at a Tokyo hospital.

Mr. Nakasone served as prime minister from 1982 to 1987, but continued to exert influence in Japan long after he left office and even after he was forced to relinquish his parliamentary position in 2003. In his later years, Mr. Nakasone, his gait slowing but his bearing ramrod straight, appeared regularly on television and granted many newspaper interviews, commenting on political matters like his long-cherished goal of revising Japan’s American-written pacifist Constitution.

Mr. Nakasone’s outsize domestic influence stemmed not only from his longevity but also from his conscious involvement in the key issues that faced Japan after World War II. The 2011 nuclear disaster in Fukushima, for example, shined a renewed spotlight on his central role in securing financing for research into nuclear energy when he was a young but ambitious lawmaker in the early 1950s.

Mr. Nakasone was also one of the few Japanese prime ministers to win recognition on the world stage. Unlike his fairly colorless predecessors, who invariably stood on the edge of group photos of world leaders, Mr. Nakasone thrust himself into the center, famously grabbing the spot between President Ronald Reagan and Prime Minister Margaret Thatcher of Britain, in a photo taken at the Group of 7 summit meeting in Williamsburg, Va., in May 1983.

Mr. Nakasone’s calls for a stronger military and for a larger role in the world for Japan resonated with Reagan. Their close relationship became known in Japan as Ron-Yasu after they began addressing each other by their first names, a practice imitated, though with far less success, by later presidents and prime ministers.

Until Mr. Nakasone became prime minister, Japan had been led for decades by a succession of leaders content with turning the country into an economic superpower and fending off American pressure to assume a political and military role more commensurate with its economic might. More than a decade after he left office, a new generation of leaders like Junichiro Koizumi and Shinzo Abe were able to start carrying out Mr. Nakasone’s vision.

Like those younger politicians, Mr. Nakasone was an ardent nationalist. In 1985 he became the first prime minister to visit the Yasukuni Shrine, the Shinto memorial to Japan’s war dead, including some who were executed as war criminals, explicitly in his official capacity. But he also showed a pragmatic side by stopping the visits after fierce complaints from China, which, like the rest of Asia, considers Yasukuni a symbol of Japanese militarism.

Mr. Nakasone was born on May 27, 1918, in Takasaki, a mountain city just north of Tokyo, where his father was a lumber dealer. After graduating from Tokyo Imperial University, now known as the University of Tokyo, he joined the Ministry of the Interior in 1941 but soon left to join the military.

During World War II, he served in the Imperial Japanese Navy. But like many of his generation, he never fully came to terms with the war; like many nationalist politicians, he tended to airbrush the worst excesses of Japan’s militarist past.

In a 1978 memoir about his navy experiences in Indonesia, he wrote that some of his men “started attacking local women or became addicted to gambling” and added, “For them, I went to great pains and had a comfort station built,” using the euphemism for a military brothel, years before forced prostitution became a political and diplomatic issue.

Mr. Nakasone retracted that admission in 2007, just before the United States House of Representatives passed a resolution condemning Japan’s wartime sex slavery. In a meeting with foreign journalists in Tokyo, he said he had actually set up a “recreation center,” where his men played board games.

In 1947, Mr. Nakasone ran successfully for a seat in the lower house of Parliament. He campaigned by riding a bicycle through the mountains, carrying a Japanese flag in defiance of Occupation regulations. He also wore a black tie as a badge of mourning over Japan’s defeat.

Mr. Nakasone became a stalwart of the Liberal Democratic Party after it was founded in 1955. But in contrast to the powerful image he projected abroad as prime minister, he was never considered a masterful back-room dealer and his influence on domestic politics was limited.

Indeed, he became prime minister only with the blessing of postwar Japan’s most famous power broker, Kakuei Tanaka, who was prime minister from 1972 to 1974 and continued to pull the strings long after scandal forced him to step down. As an indication of Mr. Tanaka’s power, Mr. Nakasone’s cabinet was known in political circles as the Tanakasone cabinet.

In 2003, in a bid to reinvigorate the Liberal Democratic Party, Mr. Koizumi effectively expelled Mr. Nakasone, then 85, from the party, along with another former prime minister, Kiichi Miyazawa, then 84. While Mr. Miyazawa bowed out gracefully, Mr. Nakasone reacted angrily, describing Mr. Koizumi’s act as “a form of political terrorism.”

Although he no longer held an elected position, Mr. Nakasone led a parliamentary group focused on revising the Constitution and wrote a preamble to a new Japanese-written Constitution, referring in romantic terms to Japan’s emperor, culture and traditions.

In a 2000 interview with The New York Times, Mr. Nakasone said of the American-written Constitution, “We will have to change the language to real Japanese.”

In another interview with The Times in 2010, he criticized the current government’s handling of relations with the United States. Clearly alluding to his friendship with Reagan, he said, “In the end, friendly relations between nations depend on the sense of trust between their leaders.”