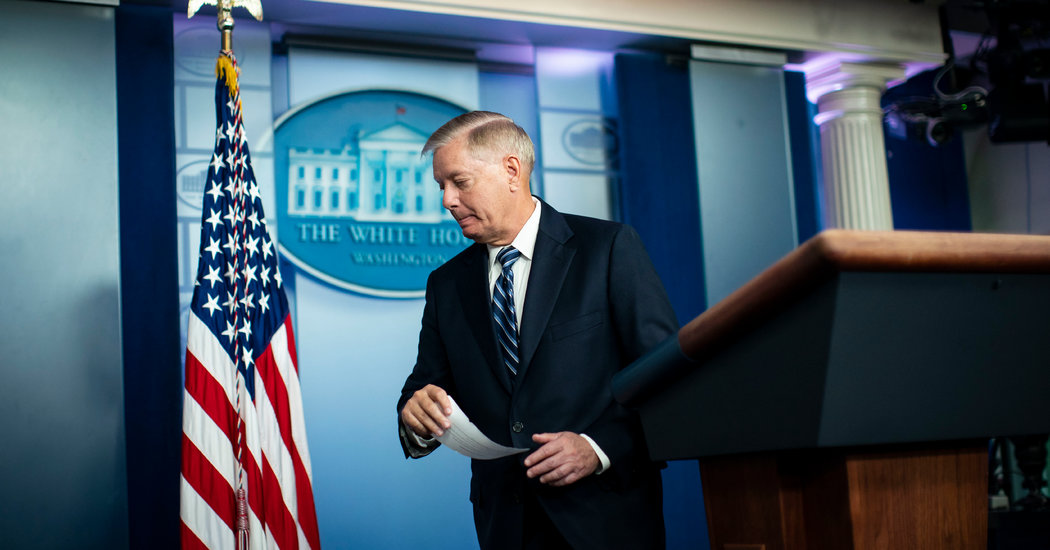 WASHINGTON — Late last month, as damaging revelations about President Trump began piling up in the impeachment inquiry, conservative commentators and activists, including one of the president’s sons, trained their anger on an unlikely target: Senator Lindsey Graham, Republican of South Carolina.

Mr. Graham, normally one of the president’s most ardent defenders in the Senate, had “not lifted a finger to help this president,” said the Fox Business host Lou Dobbs, a friend of Mr. Trump’s. “Lindsey Graham Keeps Making Empty Promises” was the headline for a segment on Tucker Carlson’s prime-time Fox program. Donald Trump Jr. weighed in using a trending hashtag: “#WheresLindsey.”

Now, Mr. Graham, the chairman of the Judiciary Committee, who had a star turn in the nation’s last impeachment drama as a manager in the trial of President Bill Clinton, has surfaced as an aggressive and unapologetically partisan defender of Mr. Trump, even starting his own investigation into former Vice President Joseph R. Biden Jr. and his son Hunter.

In the space of a few weeks, Mr. Graham, who has long prided himself on being an institutionalist, has gone from expressing an open mind about impeachment to becoming a leader of the president’s counterattack. He has angrily denounced the House inquiry — “Salem witches got a better deal than this!” he tweeted on Wednesday — while generally acquiescing to calls from an outraged party base to mount a more vigorous defense of the president. Like Mr. Trump, he faces re-election next year.

“I think Lindsey Graham has heard the message,” said former Representative Jason Chaffetz, Republican of Utah, who appeared on “Fox & Friends” in the media blitz last month to call the senator to action.

At the time, Mr. Graham was separating himself from the impeachment debate, instead drawing attention for his vocal criticism of Mr. Trump’s decision to withdraw American forces from northern Syria. He vowed to “become President Trump’s worst nightmare” over what he called “the biggest mistake of his presidency.”

Mr. Trump was not pleased.

“I think Lindsey should focus on Judiciary,” he told reporters at the White House.

Still, Mr. Graham was wary of using his powerful perch on the committee to carry out Mr. Trump’s wishes. He privately rejected the idea of opening an investigation into the Bidens, seen by many Republicans as a way to validate Mr. Trump’s efforts to get Ukraine to announce it was scrutinizing the former vice president — the conduct at the center of the impeachment inquiry. And when he was asked in an interview if he was open to supporting impeachment, Mr. Graham told Axios he was, if new evidence of wrongdoing came to light.

With those comments, long-simmering conservative frustration at Mr. Graham boiled over, and over the next two days, one by one, nearly half a dozen right-wing heavyweights made television appearances savaging the senator.

“Senator Graham is taking a very measured approach, but he is right on the precipice of a lot of frustration that he doesn’t actually hold people accountable,” Mr. Chaffetz said. “He has the gavel, and he has the personality and the reason to bring these people in.”

A spokesman for Mr. Graham declined to make him available for an interview and instead directed a reporter to an appearance the senator had made on Fox News.

“When House Republicans tried to ask these questions about the role of Hunter Biden in the investigation of the gas company, they were shut down — so, I’m going to ask,” Mr. Graham said in the interview this week.

“President Trump wants to find out about corruption in Ukraine,” he continued. “And if there’s nothing there, fine. I hope there’s not.”

The position constitutes a turnabout from just last month, when Mr. Graham persistently worked to distance himself from any talk of investigating the Bidens, to the annoyance of House Republicans who had been working to construct an impeachment counterattack, according to people familiar with the situation who spoke on the condition of anonymity to describe private discussions.

He privately told colleagues in the Senate that he did not think opening an investigation was necessary and that he did not want to do it, some of the people said. Pressed again and again by conservative interviewers, he replied that it was outside his committee’s purview and suggested that an inquiry should be taken up by Senator Jim Risch of Idaho, the chairman of the Foreign Relations Committee.

And in conversations with reporters on Capitol Hill, Mr. Graham was similarly reluctant, citing his respect for the Senate as an institution.

“I’m going to do it the way I want to do it,” he told The Washington Post. “I’m not going to turn the Senate into a circus.”

Senator Chris Coons, Democrat of Delaware, who has traveled and worked with Mr. Graham on the Judiciary Committee, has sharply criticized his decision to investigate the Bidens.

“He is going to have to choose whether what he’s doing is insisting on thoroughness and making sure everything is investigated, or whether he is creating a distraction away from impeachment simply to throw sand in the air,” said Mr. Coons, who has endorsed Mr. Biden.

Mr. Graham’s own history has complicated his role. Long before he was a close ally and golfing buddy of Mr. Trump, he branded candidate Trump a “race-baiting, xenophobic, religious bigot” during the 2016 presidential campaign. And he counted Mr. Biden among his friends when the two served together in the Senate; video recently surfaced of Mr. Graham choking up as he referred to the former vice president being “as good a man as God ever created.”

That is not the Lindsey Graham conservatives care to hear from these days. Many of them are openly pining for the kind of performance — red-faced, blustery and unapologetic — that he gave during the Supreme Court confirmation hearings for Brett M. Kavanaugh, when he declared the proceedings “the most unethical sham” he had ever seen in politics.

“This Lindsey Graham stopped a bloodthirsty, farcical attack from the Left on our nation’s most honored institutions,” Benny Johnson, the chief creative officer at Turning Point USA, a right-wing student organization, wrote on Twitter last month, posting a video of Mr. Graham’s Kavanaugh tirade. “Lindsey crushed these attacks. Do it again Lindsey.”

Before long, Mr. Graham obliged. He introduced a resolution to condemn House Democrats’ impeachment process and dialed back his criticism of how Republicans were approaching the matter. After initially deriding as “nuts” House Republicans’ decision to storm a closed-door deposition in a secure room where an impeachment witness was testifying, Mr. Graham quickly walked back his rebuke, blaming reporters for mischaracterizing the protest.

And last week, Mr. Graham went much further, asking the State Department for documents related to the Bidens and other Obama administration officials’ dealings with Ukrainians in 2016, signaling that he may delve into a debunked theory Mr. Trump has pushed that Democratic officials conspired with Ukraine to interfere in the 2016 election.

Privately, some of Mr. Trump’s most ardent defenders worried that Mr. Graham would become yet another Republican committee chairman in the Senate who was failing the president. That is how they regarded Senator Richard M. Burr of North Carolina, the chairman of the Intelligence Committee, after he issued a subpoena in May for the younger Mr. Trump during his panel’s investigation into Russian election interference.

In that case, Republican allies of the president declared war on the Intelligence Committee and turned several Republican senators against Mr. Burr. Some party leaders say that Mr. Graham has reason to worry about the same fate — and that voters might follow suit.

“Republican voters expect elected officials to show their full support of the president,” said Matt Moore, the former chairman of the South Carolina Republican Party. “Thus far, Senator Graham has navigated that dynamic really well. But he’s only one tweet away from being on the president’s naughty list.”