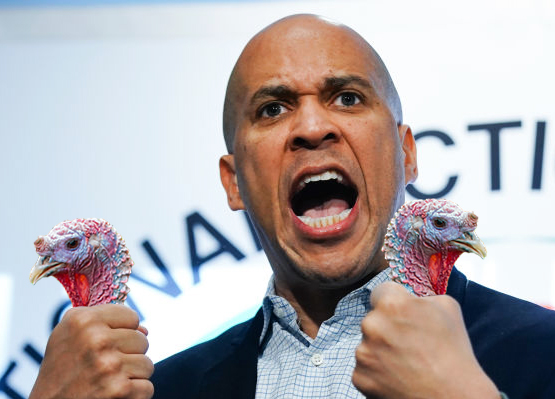 Sen. Cory Booker (D., N.J.), a candidate for president in the 2020 Democratic primary, is that guy. When the New York Times asked the Democratic candidates about their favorite “comfort food,” Booker said “veggies,” like a total vegan—which he is, in addition to to being disconcertingly jovial.

However, the prominent vegan on Tuesday refused to answer the Washington Free Beacon‘s questions about what the Thanksgiving holiday would look like under a Cory Booker administration, including whether or not President Booker would take executive action to stop the wholesale slaughter of America’s turkeys by pardoning every single one of the delicious birds under U.S. jurisdiction.

The Booker campaign first asked for clarification on what the Free Beacon meant by “all Turkeys.”

Having clarified that the Free Beacon was inquiring about the fate of all the turkeys, and further asking whether the Booker campaign had any plans to offer asylum to foreign turkeys who make it across the U.S. border, or introduce tax breaks for tofurkey, the Booker campaign persisted in its evasions.

“Those are some tough questions, guess you’ll just have to wait and see,” Booker’s national press secretary Sabrina Singh told the Free Beacon in an email.

People for the Ethical Treatment of Animals (PETA), a pro-vegan organization that describes the ultimate goal of veganism as “to help animals and reduce suffering,” has a clear stance when it comes to the American people’s ritual lust for turkey meat.

That stance is outlined in the following television advertisement PETA submitted to run on NBC during the Macy’s Thanksgiving Day Parade, but was rejected by the same network overlords who rejected Ronan Farrow’s accurate reporting on the sexual predations of disgraced Hollywood mogul Harvey Weinstein (who donated $7,800 to Booker’s Senate campaign in 2013, according to federal election records).

Collin Anderson contributed to this report.