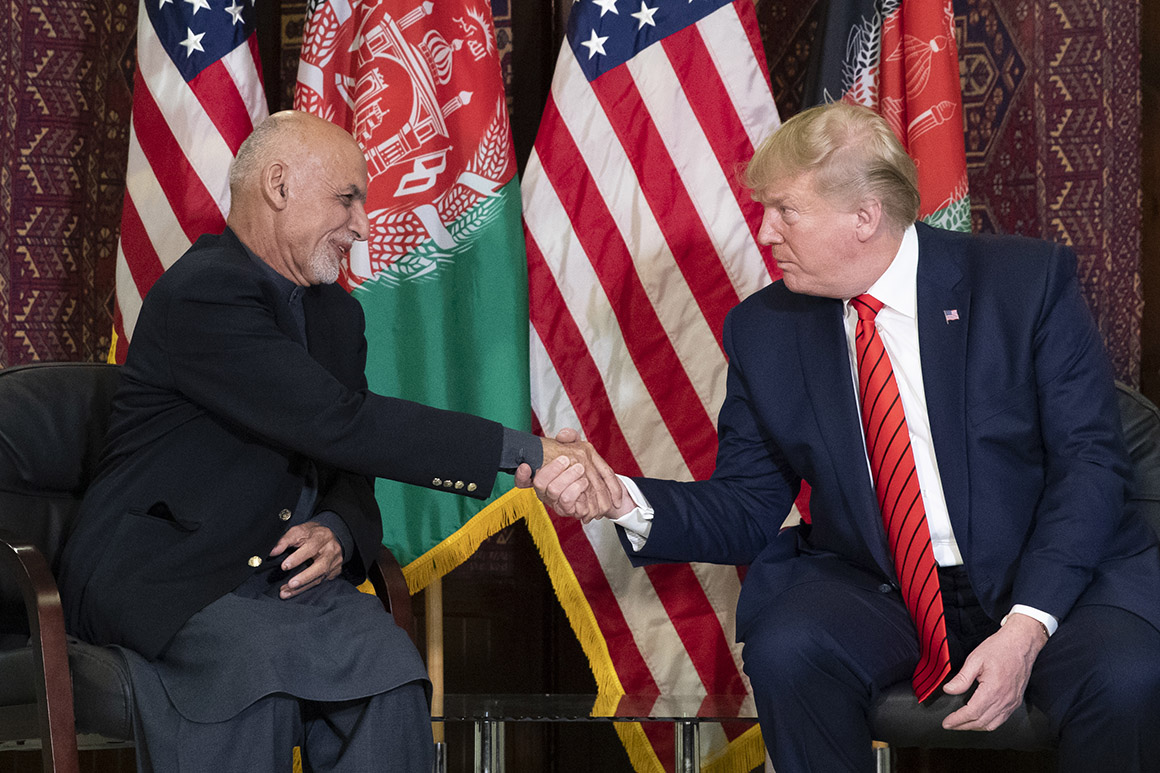 Trump has repeatedly pledged to pull American troops out of Afghanistan, but attempts to negotiate a peace settlement between the U.S., Taliban and the Afghan government have proved fitful. In September, Trump canceled plans to secretly bring Taliban leaders and the Afghan president to Camp David, cutting off talks after the Islamist militia took responsibility for an attack that killed a U.S. soldier.

But in recent days, Trump had been expressing optimism that negotiations could resume after a prisoner swap that led to the release of two westerners, including American Kevin King, who had been in Taliban hands for three years.

Trump is hoping the on-and-off talks will eventually give him a foreign policy win as he heads into a tough re-election year.

A prominent platform of Trump’s 2016 campaign was a pledge to end what he calls “endless wars” in the Middle East. But three years into his presidency, the region is beset with political instability — stalled peace talks and violence in Afghanistan, anti-government protests raging through Iran, Iraq and Lebanon, a civil war ravaging Yemen and a bloody Turkish invasion in Syria.

“We’re going to stay until such time as we have a deal or we have total victory, and they want to make a deal very badly,” Trump said Thursday.

It was unclear if the Afghan government would be involved in the restarted peace talks. In the past, the U.S. has at times negotiated directly with the Taliban.

Trump, while speaking to the troops, conceded that the war in Afghanistan “will not be decided on the battlefield.” Instead, he said, “ultimately there will need to be a political solution,” one that will be “decided by the people of the region.”

The clandestine trip started Wednesday night, when Trump secretly left his Mar-a-Lago resort in Florida to set out across the globe for the type of made-for-TV moment the commander-in-chief relishes. The White House went to great lengths to keep the excursion under wraps, even planning in advance to keep the president’s Twitter account active during the trip in order to not raise suspicions.

The 13 members of the media who traveled with Trump were barred from reporting on the trip for security reasons until after he had landed.

At 8:33 p.m. local time, Air Force One landed, interior lights off and shades drawn, at Bagram Air Field in Afghanistan. Trump was greeted on the tarmac by Mark Milley, chairman of the Joint Chiefs of Staff, who had arrived in the country separately on Wednesday.

Two surveillance blimps hovered overhead, but the base was largely dark save a smattering of lights. The president drove through the base in a 15-vehicle motorcade that included tan Toyota trucks filled with soldiers in the truck bed, armed with combat rifles. Teams of combat troops clad in fatigues, helmets and night vision goggles followed the president into each location.

The president spent about three-and-a-half hours on the ground. He served turkey to troops in a cafeteria, handing out plates and quipping, “you’ll come back,” to one service member, an apparent reference to the high quality of the food.

“I’ll be talking to you later, but right now I want to have some turkey,” Trump said. But the president never had his turkey, saying that he was almost immediately pulled into photos.

“It’s the first time at thanksgiving that I’ve never had anything called turkey,” he joked later, speaking to about 1,500 enthusiastic service members.

It’s the second time Trump has traveled to a combat zone as president. Last year, he made a Christmas trip to Iraq.

Since then, a year has passed, but the issues Trump is grappling with are all the same.

When he traveled to Iraq last year, he had just ordered a full withdrawal of U.S. troops from Syria and had pushed for halving the nearly 14,000-strong U.S. military contingent in Afghanistan. This year, Trump is still working through a U.S. drawdown in Syria — recently saying that hundreds of troops would remain to protect oil facilities — and still pushing to reduce the military presence in Afghanistan to around 8,600 troops.

Last year, Trump was facing a rupture with his military leaders over his Syria decision, with Defense Secretary James Mattis resigning in protest. This year, Trump has irritated numerous top military officials with his intervention in the case of a Navy SEAL, which led to the firing of the Navy secretary.

Visiting troops overseas has long been a holiday tradition for presidents and their top aides.

Vice President Mike Pence, who visited Afghanistan right before Christmas in 2017, made a trip to Iraq last week in part to assure Kurdish forces of the U.S.’s commitment after Trump in October abruptly reduced troops in nearby northern Syria. Nearly 100 Kurds have died and another 200,000 have been displaced after Turkey moved in, according to the United Nations.

Trump’s latest trip comes as House Democrats are wrapping up an impeachment inquiry into whether Trump conditioned a White House meeting and millions in security aid for Ukraine on the country’s leaders opening politically advantageous investigations.

The Judiciary Committee — the panel that will write articles of impeachment against Trump — will hold its first hearing on the impeachment process Wednesday, following two weeks of testimony from a dozen witnesses on the Ukraine allegations.

The troops visit also comes on the heels of a dust-up with senior military officials.

Navy Secretary Richard Spencer was fired over the weekend after he objected to Trump’s order that Navy SEAL Edward Gallagher retain his elite status, despite a recent war crimes conviction. In his resignation letter, Spencer wrote that he doesn’t share “the same understanding with the commander in chief who appointed me, in regards to the key principle of good order and discipline.”

Trump’s intervention has spurred talk within the Pentagon that other top officials could depart over similar objections.

The Thanksgiving trip, which had been in the works for several weeks, gave Trump a chance to distance himself from his troubles at home — and to highlight what he said are positive developments in Afghanistan.

“ISIS you’re wiping them out, there’s almost nothing left in this area,” Trump said to cheers, referencing the Islamic State militant group that has lost nearly all of the territory it once controlled — even though experts have warned about an ISIS resurgence and U.S. troops have resumed large-scale counterterrorism missions against the group.

Ghani, following Trump, threw his support fully behind the president, offering a rallying cry to the troops.

“With your support, what we have done to wipe out al-Qaeda South Asia is tremendous — and thank you!”

The remarks followed signals from Trump in recent days that peace negotiations with the Taliban could resume.

“You know we’re pulling way down in Afghanistan. We’re working on an agreement now with the Taliban. Let’s see what happens,” Trump told Fox News Friday.

The U.S. initially invaded Afghanistan following the Sept. 11 terrorist attacks to oust the Taliban, which had long helped harbor bin Laden. A U.S.-led NATO coalition has remained in the country to fight the Taliban, ISIS and al-Qaeda.