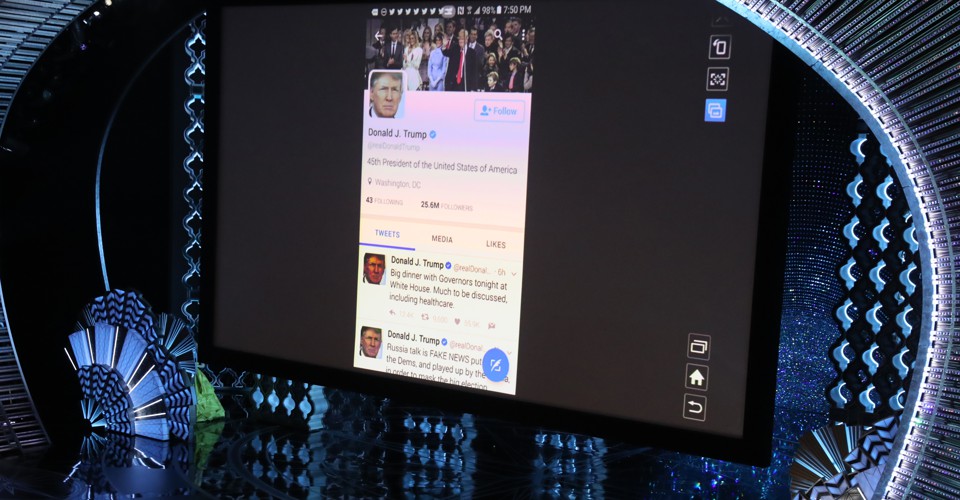 The second award presented, for makeup and hairstyling, went to Alessandro Bertolazzi, Giorgio Gregorini, and Christopher Nelson for Suicide Squad. “I’m an immigrant. I come from Italy,” Bertolazzi said, accepting the award. “I work around the world and this is for all the immigrants.” His sentiments were echoed in more specific terms by the Iranian filmmaker Asghar Farhadi, who won best foreign-language film for The Salesman, but elected not to attend the ceremony in protest of Trump’s immigration ban on seven majority-Muslim countries. His award was accepted by the Iranian American astronaut Anousheh Ansari, who read Farhadi’s statement aloud. “Dividing the world into the us and our enemies categories creates fears,” she read, with Farhadi calling out the “inhumane” immigration law earlier this year. “Filmmakers can turn their cameras to capture shared human qualities and break stereotypes of various nationalities and religions. They create empathy between us and others. An empathy which we need today more than ever.”

One presenter, too, took the opportunity to put a human face on Trump’s policies. The actor Gael Garcia Bernal, co-presenting the award for best animated feature, slipped in a quick statement, saying, “As a Mexican, as a Latin-American, as a migrant worker, as a human being, I’m against any form of wall that separates us.” And last year’s winner for best supporting actor, Mark Rylance, briefly pondered how actors and filmmakers might work to unite Americans. “Opposition’s great in film and stories, it’s wonderful in sport, it’s really good in society,” he said. “The things these films made me remember and think about was the difficulty—something women seem to be better at than men—of opposing without hatred.”

But Kimmel’s well of Trump jokes never ran dry. The Marvel movie Doctor Strange wasn’t just nominated for visual effects, it was also “named secretary of housing and urban development.” Introducing the Academy’s president, Cheryl Boone Isaacs, Kimmel noted how refreshing it was to have “a president who believes in arts and sciences.” At one point, noting Trump’s Twitter silence during the ceremony, Kimmel had his phone projected onto a screen at the back of the stage, and tweeted, “Hey @RealDonaldTrump u up?” at the president, followed by the hashtag “#merylsayshi.”

This was trolling on an expert level, with its purpose solely to belittle Trump, and to remind him that he’s more in disrepute in Hollywood than ever before. It’s cathartic, perhaps, but it comes from a place of power—there’s not much the president can do that directly threatens the film industry. But he can, for instance, defund the NEA, which has a long history of helping projects (such as the 2012 drama Beasts of the Southern Wild) and artists who later ascend to Academy glory. Pointing out the president’s personal failings will almost certainly lead to viral tweets, but pinpointing how his policies damage the arts and entertainment industries might have a more profound impact in the long run.