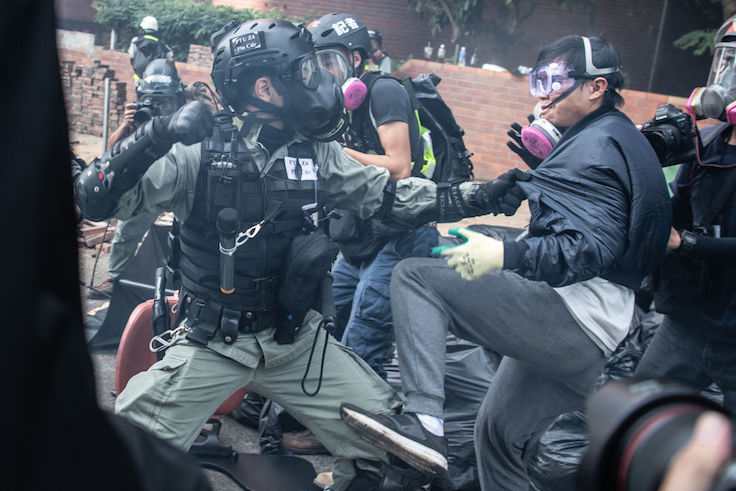 You see it in the maps. In 2015, 1.4 million Hong Kongers voted in elections in which pro-Beijing candidates swept the city’s 18 district councils. Last week, 2.9 million Hong Kongers voted and pro-democracy candidates won every district but one. That is an increase in turnout of more than 100 percent and a stunning rebuke both of Beijing and of chief executive Carrie Lam, who has failed to respond adequately to the demands of the pro-democracy movement that has disrupted Hong Kong for the past six months. Maps of the city once shaded pro-mainland blue are now pro-liberty yellow.

Yes, the vote was symbolic. The councils have little say in the operations of government. But symbols matter. For Hong Kongers to express discontent with their rulers through one of the last vehicles for accountability is no trifle. Beijing was surprised. It had counted on a supposed “silent majority” of voters tired of the upheaval and violence to legitimize the mainland’s authority. That was a mistake. The prefabricated copy that Communist propagandists had been ready to spread was abandoned. “The problem is that under the increasingly paranoid regime of Xi Jinping, even these internal reports have become much more geared toward what the leadership wants to hear,” writes James Palmer, who a decade ago worked for the pro-China Global Times.

Hong Kong is the most visible reminder of the tenuous nature of Communist rule. The city has become a postmodern battleground where masked protesters wield social media and lasers to avoid armor-clad police and facial recognition technology powered by artificial intelligence. When one looks at Hong Kong one sees a possible future where champions of freedom the world over employ desperate measures against the overwhelming resources of a mechanized Leviathan. One also sees the brittleness, confusion, and embarrassment of despotism when challenged by subjects assumed to be grateful for growth and security and immune to the will to freedom.

What is happening in Hong Kong is not isolated. The China model of authoritarian development is damaged and scarred. What seemed as sturdy and invulnerable as a Borg Cube looks more like a fragile and wobbly mobile by Alexander Calder. The regime of Xi Jinping is under economic and political and diplomatic pressure that it is not handling well. This beleaguered combatant in an era of great power competition is more dangerous to the United States than before.

What legitimacy the Communist Party possessed was based on the decades of economic growth inaugurated by Deng Xiaoping in 1978. But growth has slowed to its lowest level in decades as the Chinese workforce ages, low-hanging investment opportunities disappear, and the trade war with the United States reduces manufacturing output and sends supply lines to Vietnam and Mexico. Capital is fleeing China at a record pace as the bourgeoisie hedge against stagnation and turmoil.

For all of the Chinese government’s much publicized investments in research and development and defense, and despite the size of its economy, per capita gross domestic product is $10,000, slightly less than that of the Russia Federation ($11,000) and a fraction of that of the United States ($65,000). Recent weeks have brought an uptick in bank runs. The government’s response to slowdown has been to tighten state control. “Between 2012 and 2018, assets of state companies grew at more than 15 percent annually, well over twice the pace of expansion of China’s GDP and double the pace of growth of gross domestic capital formation,” writes Nicholas R. Lardy of the Peterson Institute for International Economics. This is not state capitalism. It’s statism.

The Chinese authorities use mechanisms of repression to maintain control over what can only be described as an internal empire. The New York Times recently published a horrifying and damning trove of documents relating the extent of Beijing’s efforts to detain, imprison, intimidate, and reeducate Uighurs, Kazakhs, and other minorities in western Xinjiang Province. China wants to override the Dalai Lama’s choice of successor in its continuing efforts to police Tibetan Buddhism and aspirations to sovereignty. China leads the world in the number of political prisoners, its Great Firewall has become more difficult to penetrate, and its influence operations in Taiwan, Australia, and other democracies more sophisticated. Defector Wang Liqiang has told Australian officials of his personal involvement in the disappearance of five Hong Kong booksellers who had the temerity to advocate democracy.

These are not the moves of a regime confident in its ability to win the allegiance of a multi-ethnic population of 1.4 billion people. They are the policies of an insular and jittery faction whose uncertainty toward a changing economic and demographic landscape has made it suspicious of and opposed to even the slightest hints of liberal democracy. The ambitions of Chairman Xi for a Eurasia integrated under the Belt and Road Initiative, where the preponderance of the latest equipment in key sectors is manufactured, are both grand and mismatched for a nation whose leaders are concerned most with the operation of the surveillance state that keeps them in power.

The resistance to Beijing is both domestic and foreign. Lost in all the predictions of Chinese dominance were the voices of China’s neighbors in the Pacific. Neither Japan, nor Vietnam, Taiwan, the Philippines, nor Australia want to live in a Chinese lake. Most extraordinary has been the response of the United States. Within four years, the American elite has swapped its belief in China’s “peaceful rise” for the recognition that it may be in the opening phase of a Second Cold War whose outcome will determine the ideological character of the 21st century. While Tariff Man wages his trade war, opposing Chinese theft of intellectual property and arguing for structural changes to China’s state owned enterprises, Vice President Mike Pence, Secretary of State Mike Pompeo, and Secretary of Defense Mark Esper speak of the political and security challenges presented by Chinese authoritarians who become more willing to lash out as they lose their grip.

Senator Josh Hawley spoke for the emerging consensus when he wrote in the November 24 Wall Street Journal: “And everywhere, in every region, we must ask whether our actions are contributing to the great task of this era, resisting hegemony in the Asia-Pacific.” A few days before Hawley’s op-ed, Congress passed the Hong Kong Human Rights and Democracy Act of 2019. Though the president already may possess the authorities to sanction Chinese officials granted him by Congress, the bill remains both a powerful statement of American support for the principles of liberty and democracy and a sign of American resolution before the specter of autocracy.

Good for President Trump to have signed the Democracy Act—and better still if he would link human rights to trade and refrain from speaking of his “friend,” the “incredible guy” who seeks nothing less than the defeat and displacement of the United States.

Matthew Continetti is a resident fellow at the American Enterprise Institute and founding editor of the Washington Free Beacon. The author of The K Street Gang: The Rise and Fall of the Republican Machine (Doubleday, 2006) and The Persecution of Sarah Palin: How the Elite Media Tried to Bring Down a Rising Star (Sentinel, 2009), his articles and reviews have appeared in the New York Times, Atlantic, and Wall Street Journal. He lives in Virginia.