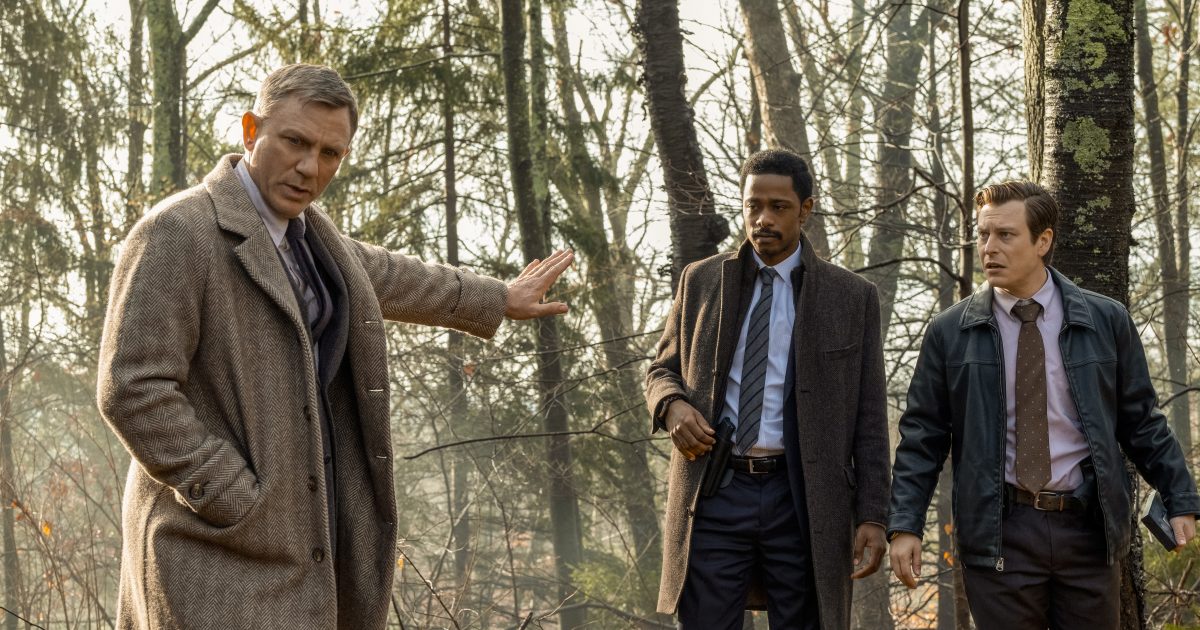 The Thrombeys are a sprawling family that’s rich in nitwits. Not so much the old man, wealthy crime novelist Harlan Thrombey (Christopher Plummer), who is in any case suddenly dead, but his heirs and in-laws, all hungry for an inheritance and just the kind of devious schemers you’d expect to find in a country manor murder mystery such as this.

Writer-director Rian Johnson, still being nerd-roasted for his smash-hit Star Wars installment, The Last Jedi, happily acknowledges his influences in constructing Knives Out—primarily Agatha Christie novels and the movies made from them (Death on the Nile, Evil Under the Sun), as well as pictures like Gosford Park and the super-tricky Deathtrap. Johnson appears to be having a lot of fun here, as does the large and star-filled cast, so it’s a shame that, despite the story’s many incidental pleasures, it never really takes off.

The plot is ridiculously complicated, of course. There are several prime suspects in the murder of Harlan Thrombey, whose throat was slit on the night of his 85th birthday party. The man assigned to crack the case (assigned by whom is another mystery) is Benoit Blanc (Daniel Craig), “the last of the gentleman sleuths,” as someone amusingly puts it. Blanc is a Poirot-like outsider, a southerner who sounds as if he’s mumbling through a mouthful of magnolias. He’s about as far removed from James Bond as Craig could possibly get, and the actor seems to be enjoying the respite (although he doesn’t do a lot of virtuoso crime-solving of the sort you might expect).

In time-honored fashion, Blanc assembles his suspects in a large drawing room filled with vast carpets and elaborate bric-a-brac. (The movie’s production design is impressively deluxe.) Among those submitting to the detective’s questioning are Harlan’s wimpy son Walt (Michael Shannon), who has a cushy sinecure running his father’s publishing house; his daughter Linda (Jamie Lee Curtis), a real-estate shark whose business has long been financed by her dad; Linda’s husband Richard (Don Johnson), a dodgy customer whose own misdeeds will eventually be made clear; Harlan’s widowed daughter-in-law Joni (Toni Collette), a “lifestyle guru” constantly in need of money; and Harlan’s smug, smirky grandson Ransome (Chris Evans, playing way against type).

Also nibbling around the edges of the plot are a pair of ineffective cops (LaKeith Stanfield and Noah Segan), the family’s sharp-eyed housekeeper (Edi Patterson), and Walt’s creepy alt-right son (Jaeden Martell).

And then there’s Marta Cabrera (Ana de Armas), Harlan’s live-in nurse, the only good-hearted person on the scene. Marta is physically incapable of deceit—she vomits if compelled to tell a lie—so Blanc recruits her to be his Watson. (“The game is afoot, eh?”)

A lot of stuff happens, Lord knows, and the story’s frenzied twists and turns never stop. There’s a secret entrance to the house, a suspiciously missing toxicology report, some lethally mixed-up meds, and a bit of rote political nudging (about illegal immigrants and children in cages) that the movie could have done without. There’s also an amusing car chase and wonderfully caustic performances by Collette and Evans. But Armas doesn’t bring a lot of spark to what is in fact the movie’s central character and Craig sometimes seems like a bystander as the action unfolds around him. His character may have a Southland drawl, but it’s so weirdly thick that you begin to wonder if he’s actually from anywhere at all.