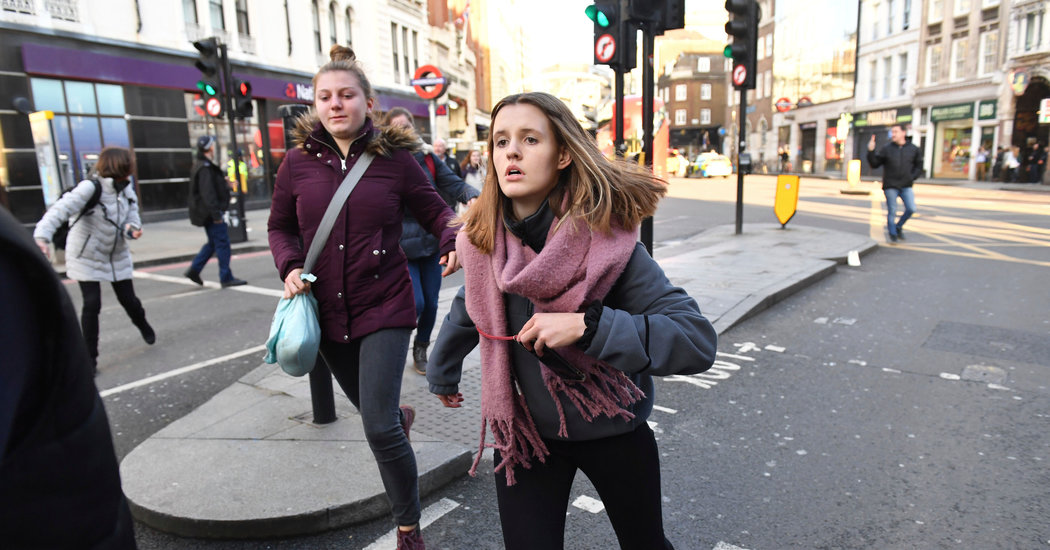 LONDON — A police officer shot and killed a man wearing a fake bomb on London Bridge on Friday, after several people were stabbed in what the police called a terrorist incident, which paralyzed one of the busiest arteries through the city.

The chaotic clash, in a country where shootings are rare, involved several officers and civilians, and sent scores of people fleeing from the bridge and areas near it on both sides of the River Thames. It also revived memories of recent terrorist attacks in London, including one on the same bridge in 2017 that killed eight people

“It has been declared a terrorist incident,” said Neil Basu, assistant commissioner of the Metropolitan Police.

Video posted on social media showed a crowd surrounding a man whom they appeared to be wrestling with and holding to the ground as police officers arrived. One man can be seen carrying a large knife away from the area as at least three police officers respond with their guns drawn.

The police pulled the other people away from the man on the ground, and then an officer appeared to fire at least one shot, hitting the man and prompting screams from bystanders.

“Due to reports that the suspect may have had an explosive device, specialist officers also attended the scene,” Mr. Basu said. “However, I can confirm at this time, we believe a device strapped to the body of the suspect is a hoax explosive device.”

The man died at the scene, he said.

The Metropolitan Police said that they had initially responded to reports of a stabbing in a premises near London Bridge around 2 p.m. and that one man had been arrested and a number of people were injured.

The police did not say whether the man who had been shot was killed.

Additional videos posted on social media showed police vehicles blocking both sides of the roadway on London Bridge. A clip taken from onboard a nearby bus showed three police officers with their guns drawn and pointed at a person lying on the ground.

One witness described seeing a man wielding a knife shot by police. As the police cordoned off the area, empty buses and abandoned vehicles remained parked on the bridge.

Sadiq Khan, the mayor of London, said in a statement that he was in close contact with the police, and urged those in the city to follow police directions.

“We must — and we will — stay resolute in our determination to stand strong and united in the face of terror,” he said. “Those who seek to attack us and divide us will never succeed.”

The British Transport Police said that the nearby London Bridge station, one of the city’s busiest transit hubs, had been closed. London Ambulance Service called it a “major incident.”

John McManus, a BBC reporter who was crossing the bridge at the time of the incident, told the news outlet that he had seen a group of men involved in a fight with another man on the bridge. The police then arrived, and “a number of shots were fired at this man.”

Prime Minister Boris Johnson issued a statement thanking the police and emergency services for their “immediate response” and said he was being kept updated. The incident came two weeks before Britain is scheduled to hold a general election.

Those in the area around London Bridge described the panic in the moments after the attack. Noa Bodner, who was stuck in a restaurant near London Bridge, told BBC News that those sheltering inside had been told to keep away from the windows.

“There was a rush of people coming in, and everybody basically dived under the tables,” she said. The manager ran to lock the doors, and employees told people to move away from the front of the restaurant.

“Some people seem a bit distressed, but they’re being looked after by friends or staff,” Ms. Bodner added.

In the 2017 attack on the bridge, a van careered onto the sidewalk, mowing down pedestrians, and then three attackers leapt from the vehicle and struck people with knives. They killed eight people before being killed by the police.

Earlier that year, a car plowed into pedestrians on nearby Westminster Bridge. Six people, including the attacker, were killed.