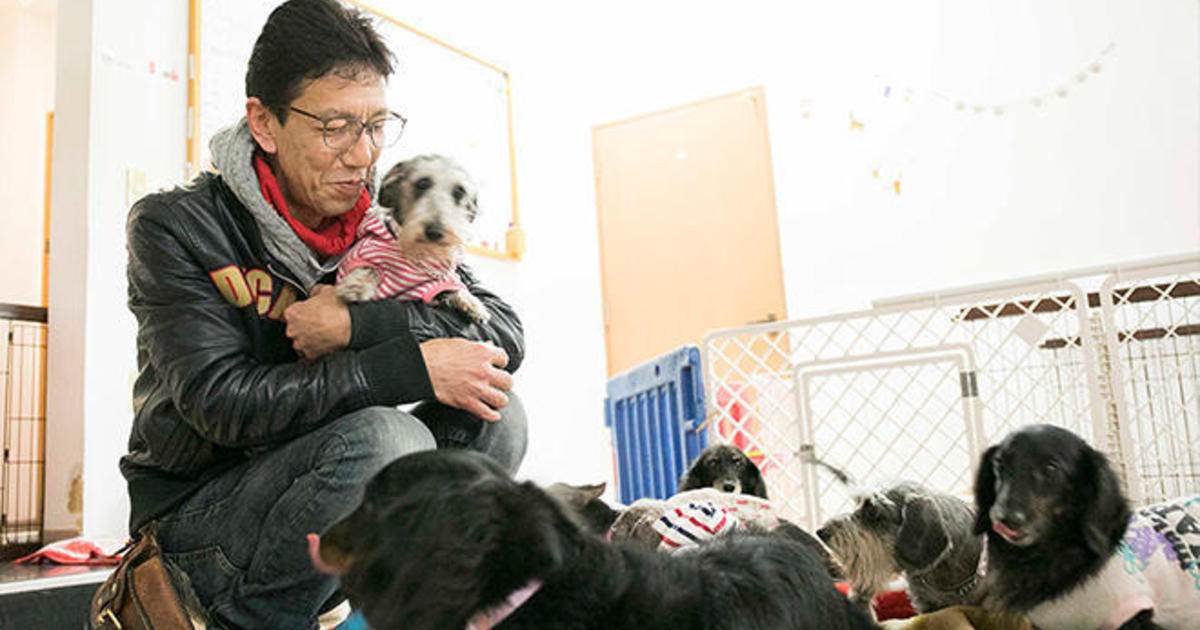 Nagoya, Japan — Abandoned and unwanted pets are a big problem across the world, with thousands stuck in shelters waiting for adoption. Older animals are particularly hard to place, leaving them at much higher risk of being put down.

Japanese animal advocate Shinobu Takahashi is pushing a solution to the problem that he says addresses another major issue facing his country at the same time. Takahashi is working to open up animal adoptions to a demographic often deemed ineligible; senior citizens.

“If you’re in your sixties or older, you’re basically shut out of the pet adoption market,” he says, explaining that many shelters cite concerns that dogs could outlive their owners and end up abandoned yet again.

So to him, “letting seniors adopt older dogs makes sense.”

Japan has the world’s fastest-aging society, which poses a lot of challenges for the country — including finding cost-effective ways to keep a burgeoning population of seniors healthy and in their own homes for as long as possible.

Takahashi’s mission is highly personal; a way of paying it back, so to speak.

The 56-year-old from Nagoya was once the toast of the town. He ran a couple of successful restaurants, until he lost everything in a confidence scam.

He found himself suddenly penniless — and friendless. He was working three jobs to pay back debts when he happened upon an ad for cheap miniature Dachshund puppies. His dog, Duca, became a constant companion, always leaping up to greet him when he came home, night or day.

With Duca’s help, Takahashi was able to conquer his despair and in 2001 he launched a new career as a dog groomer, trainer, and animal therapist.

Revenue from his pet care businesses helped him set up and continues to underwrite a nonprofit campaign to save abandoned pets from doom, and senior citizens from gloom.

Pensioners on limited incomes can request subsidized or free veterinary care and pet food. If the caretakers become incapacitated or die, the shelter once again assumes responsibility for the animal.

So far, two poodles, a dachshund, a Pomeranian and a Papillon, aged 8 to 11, have been re-homed with men and women in their 70s and 80s.

Takahashi says about a third of shelter animals in Japan come from senior owners who feel they can no longer care for their pets. He believes more programs like his, that emphasize aftercare, support and monitoring for older people who foster animals, could go a long way to help reduce shelter populations.

Takashi notes that seniors have more time to dote on dogs, while aging animals are less physically active and hence better suited to the slower pace of life with retirees. Pack-oriented animals, dogs are programmed to lavish unconditional affection on their owners, who are often on their own and starved for attention.

The dogs “give them health, and hope,” Takahashi says.

“Widowed and lonely seniors who had given up on life now have a reason — walking their dogs — to get out of the house again. They have something to talk about, they’re chatting with their neighbors again,” he says.

Similar programs in the U.S. and elsewhere have found myriad benefits for older people, including lower stress and blood pressure, and reduced depression.

In this way, Takahashi’s dog center has become a lifeline not only for the animals, but for the human participants, by keeping them engaged and active.

Japan has made progress in recent years toward reducing the kill rate at its animal shelters. As recently as 2004, Environment Ministry statistics show that almost 250,000 cats and 150,000 dogs were put down. The most recent data available, from 2017, shows that about 35,000 cats and 8,000 dogs were euthanized, most of them hard-to-place older animals.