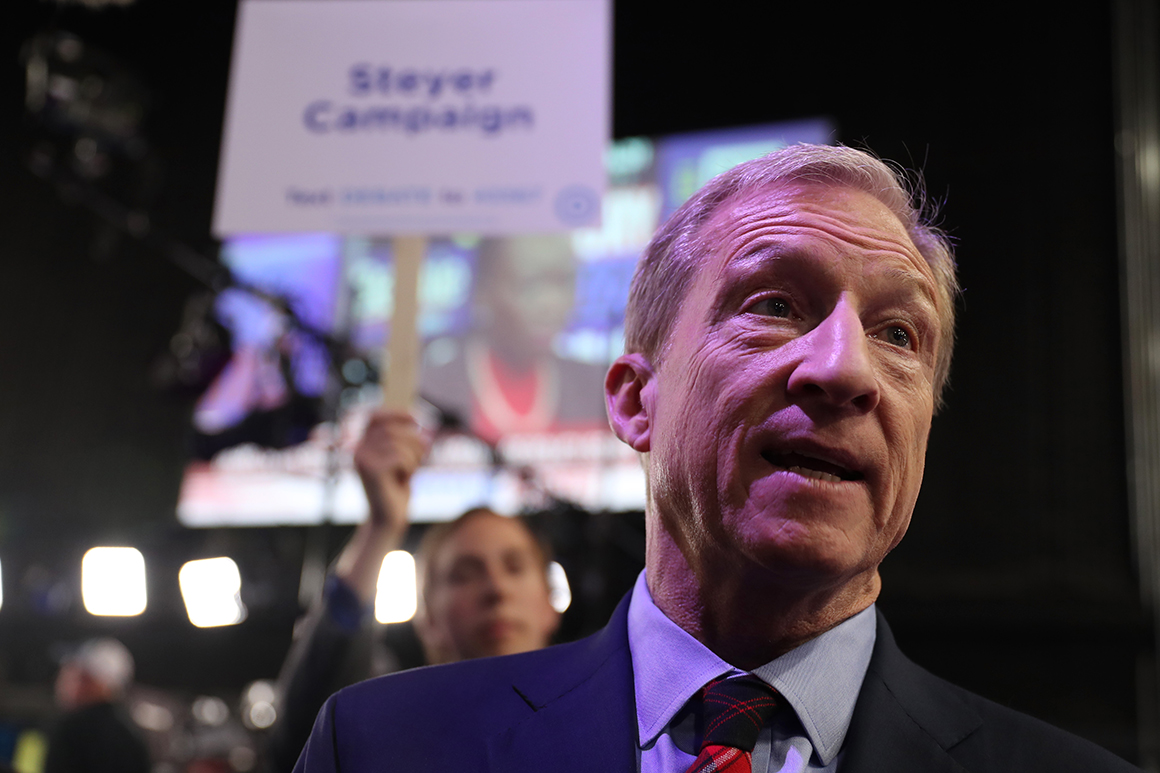 Some Granite staters said they’re seeing Steyer’s ads dozens of times a day — and it’s become more grating than ingratiating. A POLITICO reporter who watched YouTube music videos this week by Pentatonix, a popular a capella group, endured 17 Steyer ads in just over an hour.

Even some of Steyer’s local staff privately acknowledge the volume of ads has gone overboard.

Steyer has massively outspent other Democratic candidates on social media in an effort to gain traction in polls and ensure he makes the debate stage. But the recoiling of some New Hampshire voters suggests there are limits to the strategy — Michael Bloomberg beware. Indeed, some residents feel like they can’t touch a piece of technology without seeing his face.

“There is a point of no return in terms of visibility,” said Scott Spradling, a New Hampshire media analyst. “At some point, you become the uninvited guest. He uniquely is becoming dangerously close.”

Steyer has spent $55.6 million in advertising nationally so far this election, with a heavy focus on digital, according to Advertising Analytics. In New Hampshire, he has purchased several multitudes more Facebook advertising than the campaigns of Joe Biden, Elizabeth Warren and Bernie Sanders combined. His Facebook ads over the last three months represented more than a third of all political spending — from both parties — on the platform, according to a review of Facebook’s database.

At the national level, Steyer has spent $6.5 million on Facebook in the last three months, $2.8 million more than the next biggest spender, Mayor Pete Buttigieg. He also outspent Warren by $4.2 million; Sanders by $4.7 million; and Biden by $5.7 million, according to tracking provided by the social media platform.

He outspent President Donald Trump’s reelection effort by $700,000 in the same period.

Steyer has also spent millions on Google advertising, especially YouTube video ads. His campaign declined to discuss their strategy beyond stating he is committed “to communicating with voters about the importance of this election across a multitude of digital platforms.”

Without much of a national profile before the election, Steyer has tried to target the four early-nominating states in an effort to introduce himself to voters. In one way, it has worked just enough to get him a podium on nationally-televised debates. But on the ground, the ads don’t appear to be moving the needle much with voters. Steyer has steadily polled at about 2 percent in New Hampshire since the summer.

In contrast, Bloomberg is using his estimated ad buy to blanket the country. The former three-term New York mayor’s first ad focuses on his leadership after 9/11. He has ad buys scheduled in the lower 48 states, including one that will air in the media market of Trump’s Mar-a-Lago resort.

Joe Trippi, a veteran Democratic strategist who has worked on several high profile presidential campaigns, said of Steyer: “Spending this kind of money in the early states and being still in the single digits, that tells you he is having trouble connecting. You could spend $100 million like that and it may not work.”

Steyer was asked directly in a recent radio interview whether he’s passed the point of saturation to annoyance.

“I hear a lot of complaints about your social media ads blocking their YouTube videos,” the host told the candidate, referring to her teenagers. “You apparently got the high-end ones that you have to watch.”

“If people actually hear my message, they do respond,” Steyer replied. “I’m … someone who people don’t know anything about and trying to make a very specific point and introduce myself.”

Zach Montellaro contributed to this report.