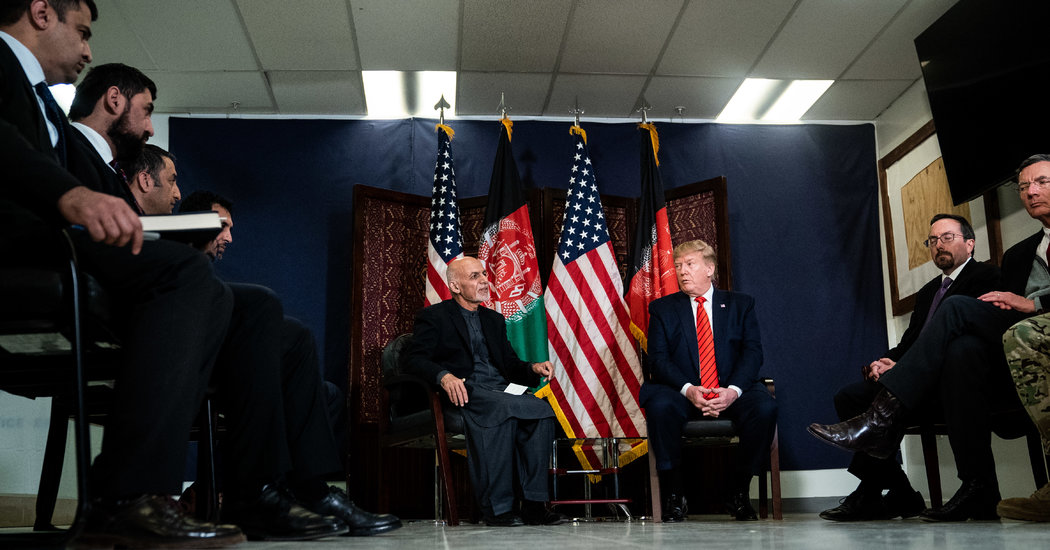 KABUL, Afghanistan — After abruptly axing nearly a year of delicate peace talks with the Taliban in September, President Trump put the negotiations back on the front-burner this week in a similarly jolting fashion by seeming to demand a cease-fire that his negotiators had long concluded was overly ambitious.

Despite a sense of relief at the prospect of resuming talks to end the 18-year conflict, Western diplomats and Taliban leaders were scrambling to figure out whether Mr. Trump had set a new goal for negotiations. They were particularly confused by his remarks, made during a surprise Thanksgiving visit to Afghanistan, that the United States was once again meeting with the Taliban to discuss a deal, but that “we’re saying it has to be a cease-fire.”

Demanding a cease-fire would amount to a big shift in the American position and require a significant new concession from the Taliban — one that the Americans have little leverage to extract.

For much of the yearlong talks, the Taliban and the United States were fundamentally on the same page: The Taliban wanted the Americans out of Afghanistan, and Mr. Trump has made no secret his desire to end what he has called America’s unending wars. But agreeing upon the details of a deal proved complicated.

In the agreement the two sides were on the verge of finalizing before Mr. Trump pulled the plug, the best the American negotiators could get the Taliban to consent to was some reduction in violence. Discussions on a comprehensive cease-fire were relegated to future talks between the Taliban and Afghan leaders — only after the United States had pledged, and begun, to withdraw its troops.

But on Thursday, Mr. Trump suggested the Taliban position had shifted.

The Taliban seemed surprised by Mr. Trump’s declaration. While the group’s negotiators have held informal meetings with United States diplomats in recent weeks about ways to go back to the table, on Friday their leaders said their original position on a cease-fire had not changed.

“The Americans walked away from the negotiating table, and now the ball is in their side — it is up to them to come back if they want to solve this and get the document to signing and to the stage of implementation,” Suhail Shaheen, a member of the Taliban’s negotiation team, told The New York Times. “Our positions remain the same.”

It’s unclear how American negotiators could get the Taliban to agree to a cease-fire now, when they were not able to do so earlier.

The American military has already begun scaling back its presence in the country, giving negotiators even less leverage than they had before. Last month, the top American commander in Afghanistan, Gen. Austin S. Miller, said the number of troops had been reduced by 2,000 over the past year.

Mr. Trump, on Thursday, said he was “bringing down the number of troops substantially.”

For the Afghan president, Ashraf Ghani, Mr. Trump’s statements were welcome. For months, Mr. Ghani had unsuccessfully tried to persuade the Americans not to give away an American troop withdrawal without a cease-fire because that would leave his government even more vulnerable.

The government has already been weakened by being excluded from the talks so far because the Taliban refuse to engage before an American troop withdrawal.

Now, suddenly, the American president gave Mr. Ghani’s position a boost at a difficult time for him, when he is stuck in a bitter fight over his re-election in a disputed vote, which is tipping the country to crisis.

Mr. Ghani met with Mr. Trump at the Bagram Air Field on the eve of large protests by supporters of his rival, Abdullah Abdullah. Much of the Afghan capital was under a lockdown by security forces on Friday morning as thousands marched to a roundabout behind the presidential palace demanding fraudulent votes be thrown out.

Mr. Abdullah accuses the country’s election commission of including 300,000 questionable votes in favor of Mr. Ghani.

Mr. Ghani and Mr. Abdullah are partners in a coalition government brokered by the United States when a similar disputed election between the two went to a stalemate in 2014. The current power dispute dividing the country has added to the complications of resuming the peace efforts.

The hope is that peace talks would eventually lead to direct negotiations between the Taliban and the Afghan leaders over the political future of the country after the United States commits to withdrawing its remaining troops, currently about 13,000 or fewer.

Keeping the peace process alive after Mr. Trump canceled talks in September has required quiet, delicate diplomacy, including work that resulted in a prisoner swap and some reduction in violence. Mr. Trump’s latest interjection in what has been a tedious diplomatic balancing act will once again have his negotiators scrambling to try to pull off what many Western officials have described as an unrealistic goal.

The Taliban see a cease-fire before the signing of a deal for the end of the American military presence as an existential issue. They believe they will not be able to rally their forces again if they ask their fighters to stop fighting and then the deal breaks down.

But the government of Mr. Ghani has said negotiating the future cannot happen under the barrel of a gun, demanding a cease-fire as a precondition to any talks.

When Mr. Trump called off the talks, the Taliban realized they had pushed their hand too far by continuing to launch attacks just days before what was expected to be a signing of the deal. In recent weeks, American diplomats convinced the group to significantly reduce large attacks in the Afghan capital as part of the prisoner-swap that saw the release of an American and Australian hostage in return for senior Taliban leaders.

But delivering a comprehensive, declared cease-fire is always going to be difficult internally for a movement that is trying to maintain unity as it negotiates potentially divisive issues.

One Western official aware of the latest peace developments said he had not seen a tangible shift in the Taliban’s position on a cease-fire during the period the talks were called off. The official expressed concern that if the Taliban were forced to reject Mr. Trump’s apparent demand of a cease-fire to keep their own ranks united, that could further complicate the formal resumption of the negotiations.

“There’s probably now some work for U.S. diplomats to do to clarify to the Taliban what did the imprecise words actually mean, and whether or not there is a change in position,” said Laurel Miller, a former U.S. diplomat who is now the Asia director of the think-tank International Crisis Group.

“The U.S. has been looking for something in the realm of the reduction in violence,” she added, “but the idea that the U.S. is on the same page with Ghani on cease-fire being a precondition — I don’t see that at all.”