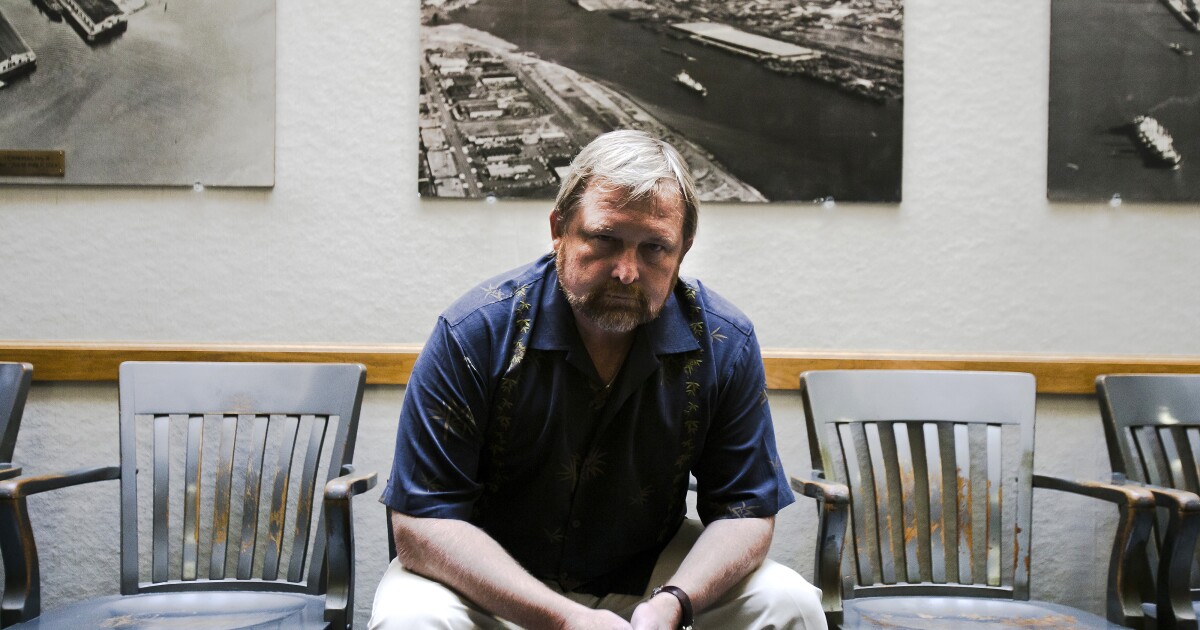 A feud that could wind up bankrupting the powerful West Coast dockworkers union began like a scene from a B-grade gangster film, when two men met over a calamari lunch.

According to federal court testimony, Leal Sundet, a burly blond union leader, introduced himself in a Portland, Ore., restaurant to Elvis Ganda, a gray-haired port terminal executive, with the words: “I’m the guy that can … you badly.”

At that time, in 2012, Sundet held the second-highest position in the International Longshore and Warehouse Union, which handles every shipping container that crosses West Coast ports. Sundet pressured Ganda to help the ILWU wrest control of the jobs of two dockside workers from a rival union, according to court testimony. The terminal manager told Sundet that he felt as if a gun were being held to his head.

The ILWU, whose 15,000 dockworkers make an average of $171,000 a year plus free healthcare, pursued the two jobs relentlessly for the next four years, staging slowdowns at the Port of Portland and flouting federal court orders. The resulting chaos caused international shipping lines to abandon Portland, ending Oregon-based cargo service for exporters as far inland as Idaho’s Snake River.

Ultimately the longshore union prevailed in the jobs dispute, as it often does — a hollow victory, considering the terminal had been forced to close. But the menacing tactics backfired so dramatically that the ILWU may face bankruptcy, according to U.S. District Judge Michael Simon, who presided this month over a two-week Portland civil trial that led to a $94-million award to Ganda’s company, ICTSI Oregon Inc.

“The amount of damages found by the jury is quite high and may result in the bankruptcy of a union that traces its beginnings to at least 1933 and arguably into the 19th century,” Simon wrote after the ILWU and its Portland chapter were found liable for unlawful labor practices. He plans to hear arguments Feb. 14 on whether he should uphold or trim the award.

It might seem far-fetched that a dispute over two jobs could financially ruin a union so powerful that all West Coast ports shut down for days when its contract talks break down. But as automation reduces work, the ILWU has sought jobs through turf battles, quitting the AFL-CIO labor federation in 2013 and wrangling with the machinists and other unions.

The Portland jobs tending refrigerated containers were coveted by San Francisco-based leaders of the old-style union, whose members still line up daily at hiring halls, many in the footsteps of fathers and grandfathers. Robert “Big Bob” McEllrath, who retired last year as union president, said he saw precedent in the two contested Portland “reefer” jobs held since 1974 by members of the International Brotherhood of Electrical Workers.

“If I let those jobs go and demanded that they be set aside or whatever, it would bleed up and down the whole entire West Coast,” McEllrath said in a deposition.

In some ways Sundet, 63, whom McEllrath assigned to pursue the jobs at Portland’s Terminal 6, embodies the proudly militant approach of the union founded by the late Harry Bridges, a Marxist who won respect championing civil rights and equality. But Sundet’s scorched-earth tactics stymied judges, confounded three Oregon governors, increased costs of trade and affected his reputation among fellow union members, who in 2015 voted him out of his $307,000-a-year post.

Sundet, who did not return phone messages seeking comment, started as a dockworker in the 1980s. He faced skepticism, having come from the Pacific Maritime Assn., the longshore employers’ organization. But he worked his way up, gaining attention in 2004 when he addressed a Democratic National Committee panel in Portland concerning homeland security.

As a coast committeeman, Sundet served on the panel overseeing the West Coast collective bargaining agreement covering the 29 ports from San Diego to Bellingham, Wash. He stayed in touch with the Portland chapter, where he’d served as president.

According to facts presented to the jury by Judge Simon, Sundet told a Portland terminal manager in 2012 that he might as well tell shipping lines to depart “because we’re going to send them packing.” Sundet guided the local chapter as members drove trucks and cranes slowly, took indirect routes around the container yard, parked vehicles to block in reefers and faked mechanical problems, the judge said.

Teamsters fumed as hundreds of trucks backed up outside the port. Container ships spent costly extra days in port, or skipped calls on Portland.

Legal gridlock also ensued. While the ILWU pressed ICTSI Oregon to give it the two jobs under terms of the union’s West Coast labor contract, company managers said the positions weren’t theirs to give. They said that according to their terminal lease, the jobs were controlled by the Port of Portland, which refused to break its contract with the electricians to reassign the work.

Either way, in 2014 the National Labor Relations Board called the ILWU’s conduct unlawful. Simon ruled the union had violated his latest injunction.

The next year, shipping lines Hanjin and Hapag-Lloyd decided to leave the port for good, leaving only Westwood, a smaller carrier. As Hanjin’s final vessel prepared to go, Mike Radak, a manager at the shipping line, begged employers to get the union to load the ship at a normal pace: “We did what the union wanted and we left; now they need to repay the favor.”

In 2017, ICTSI Oregon paid $20 million to exit its 25-year lease to operate the terminal, an expense included in the $135 million in damages the company sought from the union. Portland dockworkers displaced from the terminal regained much of their income through a “pay guarantee program” in the coast contract. Containers they would have handled went to other West Coast ports, where union members got the work.

In her closing argument, Amanda Gamblin, an attorney for ICTSI, mocked dockworkers who said they were devastated when the terminal closed. “It is like stabbing someone with a butter knife 1,000 times and then being devastated when she dies,” Gamblin said.

Susan Harriman, an attorney for the union, blamed the closure mainly on ICTSI, saying workers “were treated like donkeys and belittled and fired without cause.” She said that the company decided to make money on the lawsuit instead of making the terminal a success.

The jury took just 3 1/2 hours to return the verdict and $94-million award, with the ILWU liable for 55% of the damages and Portland Local 8 the other 45%. The union has about $20 million in assets, and Local 8 has $150,000, according to federal filings. Longshore workers at a recent caucus meeting in San Francisco reportedly preferred bankruptcy to assessing members.

A union spokesman declined to be interviewed or to discuss the practical effects of a bankruptcy, which could expose the fiercely independent, private organization to unaccustomed outside influence and scrutiny.

Sundet returned to the Portland chapter for work. On May 24, 2016, he joined a longshore “gang,” or work group, dispatched to load the last vessel sent by Westwood, which by then had also decided to give up on Portland.

Sundet entered a cab high above the 45,000-ton ship and began operating a crane. “Sundet was observed moving slowly and inefficiently,” ICTSI manager Jon Lusk wrote in a shift report. “At 13:30 he had loaded only six containers.”

As the departure deadline approached, the dock foreman told Sundet that a manager wanted to replace him with an experienced operator. “Tell him to go f— himself,” Sundet replied, and refused to leave the cab, according to Lusk’s report, which Sundet subsequently confirmed.

Out of time, the Westwood Columbia departed for Asia with 141 Portland containers aboard. Forty-seven containers remained stranded on the dock.