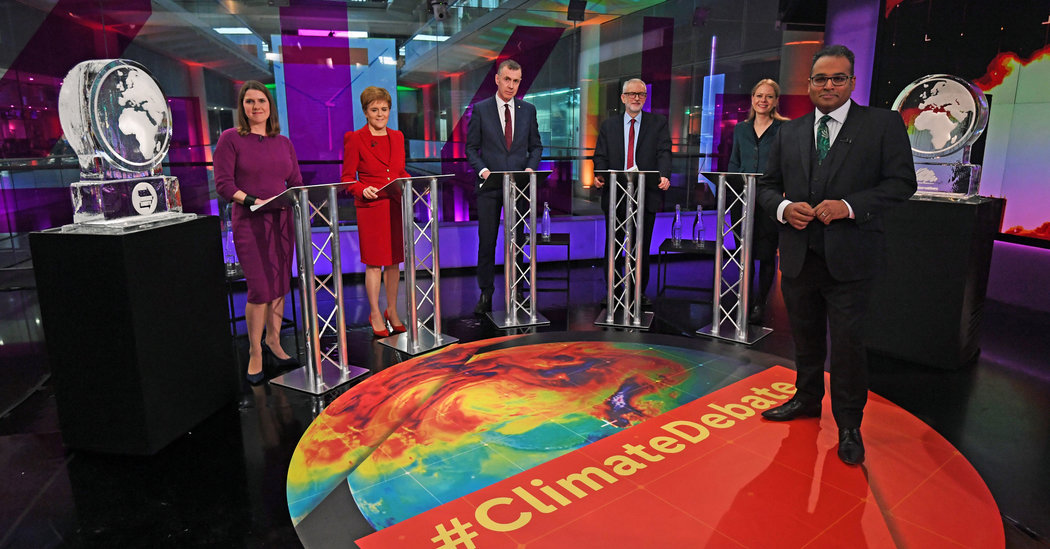 The sculpture stood in for Prime Minister Boris Johnson, the leader of the Conservatives and the figure who seems to loom over all of British politics. His absence fueled criticism that he has sought to avoid both the public and tough questions from the press during the election campaign.

The ice sculpture infuriated Conservatives, some of whom accused the host network, Channel 4, of partisan bias.

Mr. Johnson did send an emissary in his stead: Michael Gove, a cabinet member who formerly served as the environment minister, but Channel 4 said the debate was for party leaders only.

Nigel Farage, the leader of the right-wing Brexit Party, also declined to participate. Channel 4 erected an ice sculpture for each of the two missing candidates, flanking the five politicians who attended. The channel said the ice sculptures — one marked “Conservatives” the other “Brexit Party” — “represent the emergency on planet Earth.”

Before the debate, the opposition Labour Party had accused Mr. Johnson, who leads in the polls ahead of the Dec. 12 election, of being afraid to face the press. Mr. Johnson and the BBC have yet to confirm that the prime minister will sit down for an interview with Andrew Neil, who grilled the Labour leader, Jeremy Corbyn, this week.

Conservatives threatened to review Channel 4’s broadcasting license after the election, according to BuzzFeed News and The Guardian.

Channel 4’s editor, Ben de Pear, referred to the license threat on Twitter, writing: “Put your leader Boris Johnson alongside the other leaders and stop playing games.” He added, “All the parties complain about us, but they’re here.”

Mr. Johnson did not explain his absence. In a video that Mr. Gove tweeted of himself arriving at Channel 4, he said that Mr. Johnson could not attend “at the moment.” Asked if the prime minister was “otherwise committed,” Mr. Gove replied, “indeed.”

At the debate itself, Mr. Corbyn and the leaders of the Green Party, the Scottish National Party, the Liberal Democrats and Plaid Cymru, or the Party of Wales, argued over courses of action Britain could take to combat climate change. Among the topics discussed: insulating and retrofitting homes; moving to solar and wind energy; planting millions of trees; eating less meat; and saving British wildlife like the hedgehog.

Though the leaders emphasized different priorities, all agreed on the urgency of addressing climate change and outlined ambitious proposals, like “a green industrial revolution,” promised by Mr. Corbyn. In June, the Conservative government of Mr. Johnson’s predecessor, Theresa May, vowed to cut greenhouse gas emissions to almost zero by 2050.

The other issue that has loomed over the election, Brexit, also made a brief appearance. Jo Swinson, the leader of the Liberal Democrats, called Britain’s withdrawal from the European Union “a climate crime,” saying, “it’s morally wrong to give up our seat at the table.”