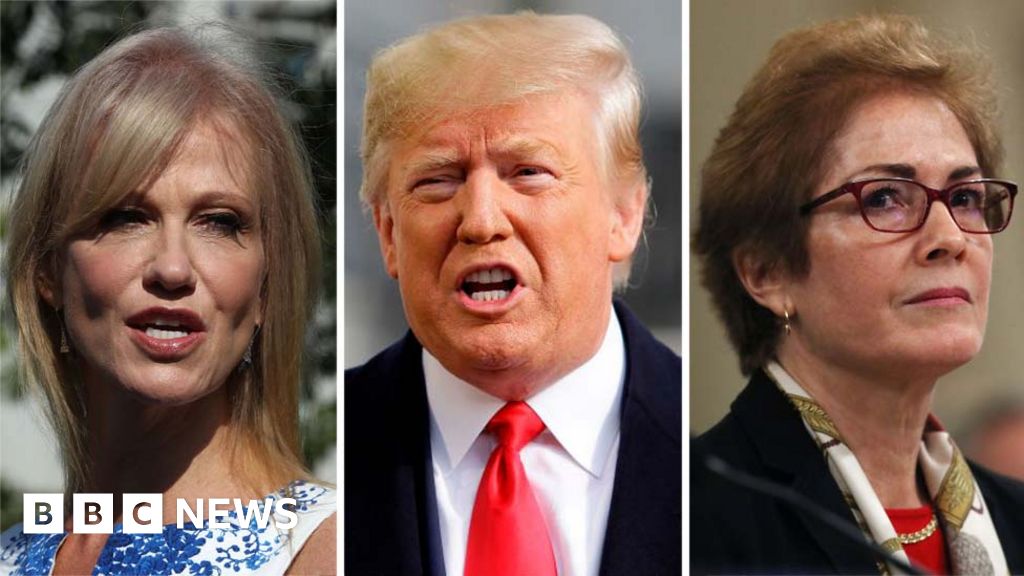 With a number of women running to take on President Donald Trump in the 2020 election, the president’s language about his opponents will undoubtedly be a recurring issue. But is there really a gender difference to his attacks?

In an interview, Mr Trump referred to career diplomat Marie Yovanovitch, the former ambassador to Ukraine, not by name, but as “the woman”.

Ms Yovanovitch, who Mr Trump recalled from her post in May, testified in the public phase of the impeachment inquiry on 15 November. She told lawmakers she was removed in a smear campaign by those with “questionable intentions”.

Justifying his decision to oust her, the president told Fox & Friends last Friday he heard “bad things” about “the ambassador, the woman”.

“This was not an angel, this woman, okay? And there were a lot of things that she did that I didn’t like.”

Mr Trump added that his staff felt they had to be kind because “she’s a woman – we have to be nice.”

Professor Marianne LaFrance, a psychologist at Yale University, says this remark is a prime example of gendered language.

“That referencing says she’s not an individual, she’s not a professional, she’s first and foremost a woman,” Prof LaFrance says.

“One of the things that’s interesting about women and language is that women are ‘marked’.” Men, she notes, are not usually referred to as a “male person”.

“But we find it often easy and useful to describe a person first and foremost as a woman. Not a politician – she’s a woman politician. You don’t often say he’s a male politician.”

And once language is used to “mark” someone, it “taps into a whole universe of stereotypes” that are typically unconscious.

“So in saying a female politician – before you’ve said anything else about her policies, her credentials, her professional standing – you’ve said a lot.”

Even before he became president, Mr Trump had a history of controversial comments about women. His comments in a 2005 Access Hollywood tape about grabbing women “by the pussy” are perhaps the most notorious, and made headlines in 2016.

Debbie Walsh, director of the Center for American Women and Politics at Rutger’s University, says these latest remarks are part of a pattern.

“The kind of things that he said about Hillary Clinton, Carly Fiorina, Elizabeth Warren, Heidi Cruz – the list goes on – he talks about women, any prominent, powerful woman, in the most demeaning of ways, trivialising them.”

Even women backing Mr Trump have not been immune to subtly gendered critiques.

On Friday, Mr Trump told Fox & Friends his adviser Kellyanne Conway was great, but “must have done some number” on her husband, George, who is a Trump critic.

“She must have done some bad things to him because that guy’s crazy,” the president said.

Ms Walsh also notes the women closest to Mr Trump “have the appearance of a kind of hyper-feminised version of women”.

Ivanka Trump, for example, is a successful businesswoman, but still fits within the typical image of a woman “on the arm of powerful men”.

Some of Trump’s past comments about women:

From a psychology perspective, Prof LaFrance says when comments go into the realm of insult, they can be insidiously harmful.

A recent study looking at how women are affected by overhearing sexism found that even when a comment was not directed at the listener, it had a negative impact on a woman’s self-esteem, measured by how well she evaluated her own performance and abilities following the incident, Prof LaFrance explains.

“It sets up an atmosphere in which all women are targeted, not just the one person who was a target [of the sexist comment] – that’s what’s particularly damaging.”

With Mr Trump specifically, Prof LaFrance says when he criticises female opponents, he often reduces them to a sexual object or someone unworthy of respect or attention.

“Comments about a woman not being strong, a notion that she’s frail or weak – those appear to be much milder in comparison to talking about her pussy, but they have as damaging, if not more damaging effects on women,” Prof LaFrance says, as it taps into existing notions that women are perceived as less-than men.

Despite the controversial ways he describes women – and the distinctly male look of his cabinet – it would be unfair to say that Mr Trump excludes powerful women from his inner circle.

In addition to Ivanka, who is a White House adviser, the highest profile members of the administration defending the president on a daily basis are Ms Conway and press secretary Stephanie Grisham. Ms Grisham’s predecessor too, was a woman – Sarah Huckabee Sanders.

When challenged on his attitude to women, Mr Trump has in the past pointed to his record in recruiting and promoting women in his companies. “I love women,” he proclaims.

His 2020 campaign is led by Brad Parscale, but according to Politico, the highest levels of the campaign team include over a dozen women as senior advisers and directors.

The BBC reached out to Women For Trump, one of the biggest pro-Trump women’s political groups, for comment but did not immediately receive a response.

The women who love Trump

“I understand some of his quips are not popular,” says Virginia Derby Jordan, a lawyer who lives in Orange County, Virginia.

But she says she doesn’t mind. She and other conservative women in Virginia, Pennsylvania and other states say there are more important issues than the president’s remarks.

They applaud the way he has helped bring down unemployment among women and appreciates how he has fought against abortion through the appointment of conservative judges.

In addition, Jordan and other Republicans like the way he has hired women such as Kellyanne Conway, a counsellor to the president, for high-profile roles: “He has put women in very important places,” Jordan says.

Jordan attests to the fact that despite the controversial way the president talks about women, many of them still adore him and will vote for him again in 2020.

Doesn’t he nickname men too?

If the president’s preferred nicknames for women are nasty, crazy, and low-IQ, his go-tos for men are in a similar vein.

“He’s also pumping himself up as the uber-masculine figure at the expense of the men who are challenging him in any way.”

Prof LaFrance notes: “Once you’ve referred to a person’s size or standing as small or little, then you’re trafficking in the realm of gender terminology.”

For Ms Walsh, though Mr Trump does not discriminate in criticising men and women who oppose him, the attacks on women are more dangerous.

She says the instance where Mr Trump singled out four freshmen Democratic congresswomen of colour and told them to “go home” was particularly “threatening”.

“We know women are often targeted on the political front, threatened certainly online, and singling them out and using very loaded language about those four women was one of the most egregious things.”

Just under half of men said they approved of how Mr Trump was handling the presidency, compared to 32% of women.

Pew analysis of his first two years in office found his average approval rating to be 44% among men and 31% among women – the widest gap between genders since the George H W Bush presidency.

And while Mr Trump found success with white women voters in 2016, he may find it more difficult to win them this time around, according to recent polling.

Ms Walsh says Mr Trump could see real challenges in winning over white, college educated, suburban women who are typically Republicans “in part because of this language, this behaviour and the way he treats women”.

“The gendered language is already out there,” says Ms Walsh.

“I think that it is likely on the Democratic side, that one way or another, there will be a woman on the ticket [for president or vice-president]. And I’m sure that woman will come under attack…I think we’re in for more of the same.”