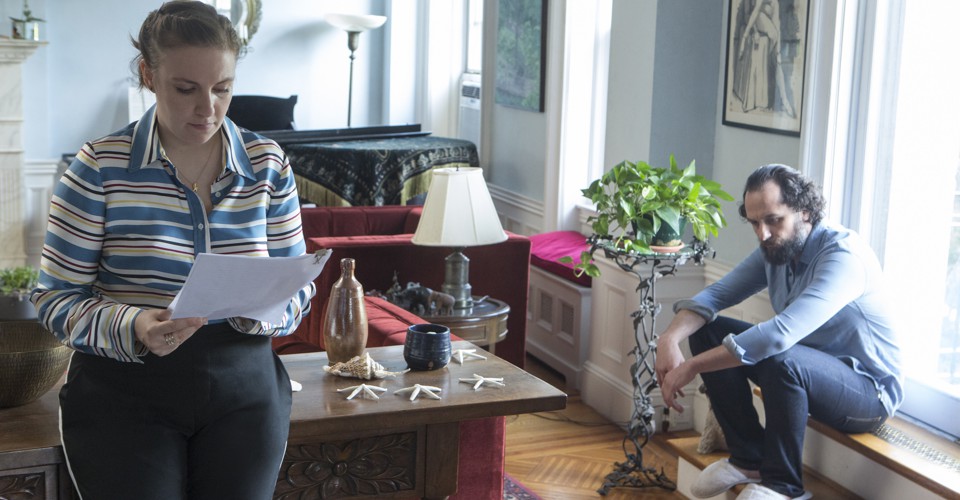 This week’s sure-to-be-provocative episode “American Bitch”—posted to online platforms now and airing on HBO Sunday night—sharpened the show’s point of view on psychological cause and effect. In it, Hannah visits with a famous author, Chuck Palmer (Matthew Rhys), after writing an essay about accusations that he’d serially preyed on college-aged female fans. Chuck makes his case for innocence, Hannah relates some details from her past, and the two seem to come to an understanding—and then Chuck takes his penis out and presses it against Hannah. It’s a story of personal monstrousness and trauma, but it’s also a story about a system: a gender dynamic that ensures a common experience of degradation for women, whether in their pasts or in the present.

Chuck Palmer has a surprising amount in common with Hannah. His fussiness hints at OCD. He proposes that writers need stories more than anything else, echoing Hannah’s experiences-at-all-cost outlook throughout Girls. The two bond over their love of Philip Roth, agreeing that “you can’t let politics dictate what you read or who you fuck” (Chuck’s words). And most tellingly, Chuck professes to want to understand the person he’s talking to but constantly interrupts with his own observations—perhaps a sexist tic, but also a narcissistic one plenty familiar to Girls viewers. In all of these things, Dunham may be sketching some ideas about the intrinsic traits that make a writer.

But most of their conversation is a clash of biographies. Chuck emphasizes his loneliness, his daughter’s depression, his ex-wife’s hostility, and the sadness of book-tour life. When Hannah suggests an inappropriate power balance in him hooking up with girls on the road, Chuck shoots back that the real imbalance is that “she looks like a Victoria’s Secret model and I didn’t lose my virginity till I was 25 and on Accutane.” He is the victim in this reading. The women complaining online are exploiting his fame and desperation as well as the power of the internet to amplify harmful claims.

It appears that this version of events nearly persuades Hannah, who apologizes for having written something that upset Chuck. But the apology is colored by all the buttering-up that has come before. Chuck repeatedly tells her how smart he thinks she is. He gives her a signed copy of Roth’s When She Was Good. And he claims that he invited her over to try and correct his true error with his accusers: not “pushing” enough to get to know them as people. When he then asks questions about her life, Hannah giggles and blithely answers.

But during an earlier, tenser point in the conversation, Hannah relates a less happy bit of her history. In fifth grade, her English teacher Mr. Lasky took a liking to her based on her talent as a writer:

He liked me, he was impressed with me, I did like special creative writing, I wrote like a little novel or whatever. Sometimes, when he was talking to the class he would stand behind me and he’d rub my neck. Sometimes he’d rub my head, rustle my hair. And I didn’t mind. It made me feel special. It made me feel like someone saw me and they knew that I was going to grow up and be really, really particular. It also made kids hate me and put lasagna in my fucking backpack, but that’s a different story.

Anyway, last year I’m at a warehouse party in Bushwick, and this guy comes up to me and he’s like, “Horvath, we went to middle school together, East Lansing!” And I’m like, “Oh my god, remember how crazy Mr. Lasky’s class was? He was basically trying to molest me.”

You know what this kid said? He looks at me in the middle of this fucking party like he’s a judge, and he goes, “That’s a very serious accusation Hannah.” And he walked away. And there I am and I’m just 11 again, and I’m just getting my fucking neck rubbed. Because that stuff never goes away.

If this is Hannah Horvath’s long-awaited revelation about her past, it’s a relatively mild one: no rape, no violence, just some neck rubbing in class. But the insidiousness of it is in how it fits a pattern of warped gender relations. Chuck is like Mr. Lanksy: an older, powerful man praising a younger woman’s intellectual talents—but also tying that praise to flesh. Hannah’s value as a writer and her value as a body were long ago swirled together by a gatekeeper, and Chuck did something very similar to the young would-be authors he had sex with. If they consented, what were they consenting to? A validation of their mind, or the notion that what really matters is their body?