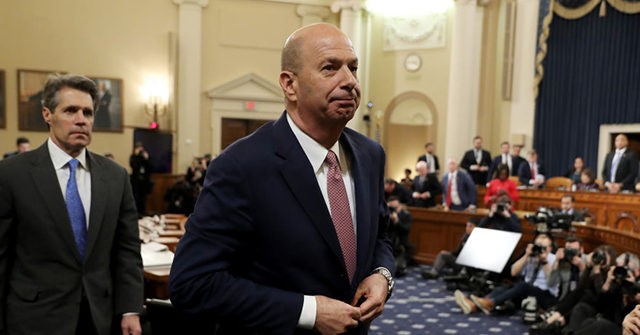 Gordon Sondland, the U.S. ambassador to the European Union, has no plans to resign over allegations of sexual misconduct, an individual close to the high-ranking diplomat said.

A close associate of Sondland stated the ambassador has “no intention of resigning” following a report on misconduct allegations against him or his testimony before the House Intelligence Committee as part of the ongoing impeachment inquiry into President Donald Trump, according to Politico.

The Portland Monthly published accounts by three women who said that Sondland, a wealthy hotel owner from Seattle, retaliated against them professionally after they rejected him sexually.

One of the women, Jana Solis, said she met Sondland in 2008 when she was seeking work in her position as a safety expert for hotels.

She said Sondland met her for lunch and offered her a job as “my new hotel chick” before slapping her rear.

She said Sondland later invited her to his Portland home to evaluate his personal art collection — which included a picture of himself with then-president George W. Bush — and that he exposed himself in the pool house.

She said Sondland at a later meeting also forcibly kissed her.

Another woman, Nicole Vogel, said she met Sondland in 2003 over dinner to seek investment in a new magazine.

He then took her to a hotel he owned and invited her to see a room, where he requested a hug and then “grabs my face and goes to kiss me,” she said.

Vogel said she refused and left. She pointed to an email afterward in which Sondland declined funding for her project.

Sondland in a statement rejected all the accusations and accused Vogel of “underhanded journalism” out of anger that he did not invest in the magazine.

“These untrue claims of unwanted touching and kissing are concocted and, I believe, coordinated for political purposes,” he said.

“They have no basis in fact and I categorically deny them,” he said.

Vogel owns the Portland Monthly, which published the article. The magazine said that, due to her implication in the story, it teamed up with ProPublica, a respected non-profit newsgroup known for investigations.

A lawyer for Sondland told the magazine the article was timed to damage the ambassador’s credibility in the impeachment inquiry.

Jim McDermott, an attorney for the ambassador, said of the allegations that “a reasonable conclusion to be drawn is that you are attempting to affect Ambassador Sondland’s credibility as a fact witness in the pending impeachment inquiry.”

“Given the politically charged climate in which current events are unfolding, some might consider this to be veiled witness tampering,” he added.

Critics have pointed to Sondland’s July 26 telephone call with President Trump as evidence that implicates the president in a so-called “quid pro quo” scheme to trade U.S. military aid to Ukraine for an investigation into allegations of corruption against former Vice President Joe Biden and his son, Hunter Biden. A CIA analyst’s mischaracterization of President Trump’s July 25 call with Ukrainian President Volodymyr Zelensky sparked a “whistleblower” complaint, which prompted the effort for Congress to oust the president.

Sondland testified it was likely he told the president that Zelensky “loves your ass” and is prepared to working together on various issues. Last Thursday, State Department official David Holmes testified that he overheard the president asking the U.S. ambassador, “So, he’s gonna do the investigation?” — a reference to Zelensky opening a review of the Biden family. Holmes claimed that Sondland replied, “He’s gonna do it,” and conveyed to the president that Zelensky would do “anything you ask him to.”

President Trump and Zelensky have both denied that any pressure was applied to probe the former vice president and his son and the White House released two transcripts of the world leaders’ conversations as evidence that no wrongdoing took place.

The Agence France-Presse contributed to this report.