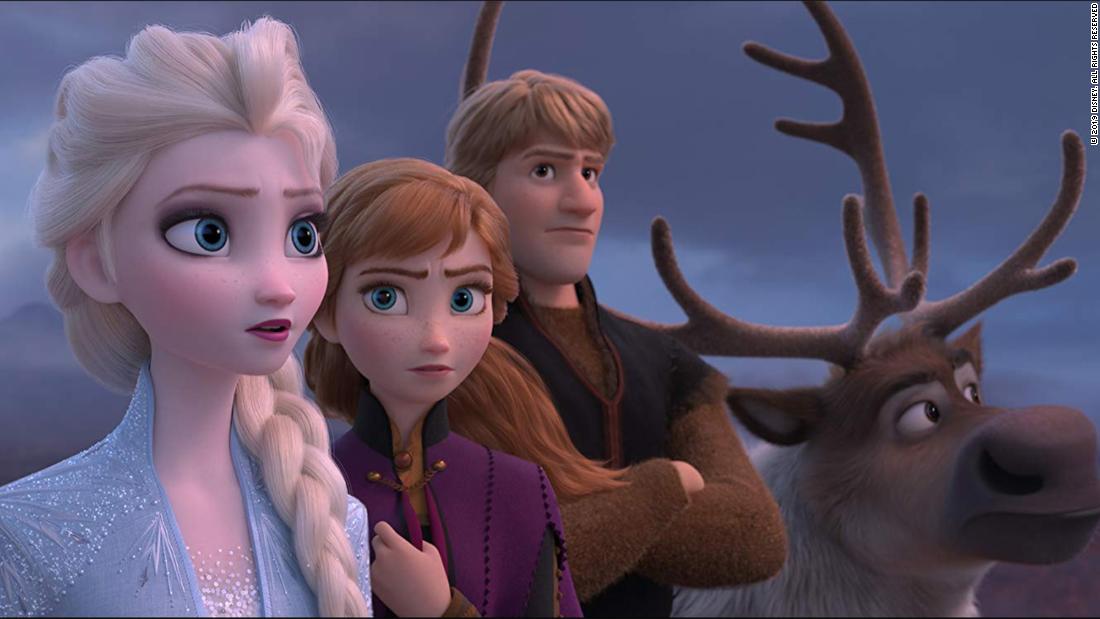 A week after “Frozen 2” crushed box office records as the biggest global opening for an animated film, the Disney movie is set to break even more records in its second weekend.
The film is projected to bring in around $120 million over the Thanksgiving weekend, setting a new record for the five-day holiday period. “Frozen 2” would surpass current record-holder “The Hunger Games: Catching Fire,” which made $109 million over the Thanksgiving holiday in 2013, according to Comscore (SCOR).
“It speaks to Disney’s ability to draw out families on major movie-going holidays,” Shawn Robbins, chief analyst at Boxoffice.com, told CNN Business. “‘Frozen 2’ appeals to all ages and with families together for Thanksgiving it makes perfect sense why the film would have a strong showing this weekend.”
“Frozen 2,” which brings back the vocal talents of Idina Menzel and Kristen Bell, made $130 million last weekend. That was the highest-grossing debut ever for Walt Disney Animation Studios. The sequel to the 2013 phenomenon also set the record for the biggest global opening for an animated film, making $358 million worldwide.
The film is already another big hit for Disney, which is having an unprecedented year at the box office. By July, the company had already set the record for highest-grossing year for a studio thanks to hits like “Avengers: Endgame” and “The Lion King.”
The studio has also had five films make more than $1 billion at the global box office. “Frozen 2” could be the next film to join the $1 billion club.

But “Frozen 2” isn’t the only film for moviegoers to feast on this Thanksgiving.

“Knives Out,” a whodunit murder mystery starring Daniel Craig and Chris Evans, and the romantic drama “Queen & Slim,” which stars Daniel Kaluuya and Jodie Turner-Smith, are both new to theaters this weekend. The two films could find an audience that is looking for adult counter-programming to “Frozen 2.”

The new films are receiving solid reviews. “Knives Out” has a 94% score on review site Rotten Tomatoes while “Queen & Slim” has an 84% score. “Frozen 2” holds a 76% score on Rotten Tomatoes.

The box office has been struggling as of late, but Robbins said this weekend could be “the turn of the tide” that leads into next month’s “Jumanji: The Next Level” and “Star Wars: The Rise of the Skywalker.”

“Hollywood should be happy this weekend,” he said. “With a lot of buzzy films in theaters, this is what the industry wanted to see this holiday.”