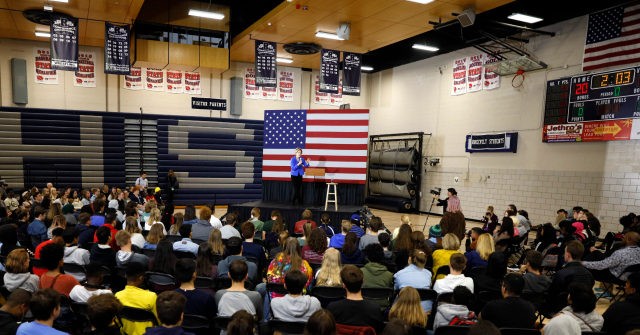 After a November 21 campaign rally in Atlanta, Warren was politely confronted by pro-school choice activists representing the Powerful Parent Network, a group that advocates for school vouchers, charter schools, and homeschooling. The group is not anti-public education; they just want parents to have education choices available to them, most especially inner-city parents, who are disproportionately affected by failing public schools.

Being a Democrat means toadying up to the vile and powerful teachers’ unions, which means Warren has come out against anything that offers parents these choices. As Breitbart News reported, “Warren released her education plan in October, which called to eliminate school vouchers, tuition tax credits, and federally funded expansions of charter schools.”

Anyway, the Powerful Parent Network activist who confronted Warren in Atlanta is named Sarah Carpenter, and she politely explained to the Fake Indian that she just wants everyone to “have the same choice that you had for your kids, because I read that your children went to private schools.”

Warren calmly tried to shut Carpenter down with this whopper: “My children went to public schools.”

Great response — you know, except for the fact that it’s not true.

After video of this moment went viral on social media, Warren’s campaign was forced to admit her son attended a pricey private school.

Warren has two children, and one of them attended both public and private schools, her campaign has since admitted.

“Elizabeth’s daughter went to public school. Her son went to public school until 5th grade,” the campaign explained in a statement provided to FactCheck.org. It also said: “Elizabeth wants every kid to get a great education regardless of where they live, which is why her plan makes a historic investment in our public schools. Every public school should be a great school. Her plan does not affect funding for existing non-profit charter schools, but she believes we should not put public dollars behind a further expansion of charters until they are subject to the same accountability requirements as public schools.”

Warren’s son, Alexander, attended at least two private, college preparatory schools, according to articles from conservative outlets that wrote about her claim. We could not independently confirm which private schools he attended, and the campaign didn’t disclose them.

Warren spent decades stealing the privileges and promotions that came with her false claim of being a Cherokee Indian — a proven lie she has still not owned up to. And now she’s lying about her children’s background.

What’s more, when a Democrat tells a lie that’s so audacious the left-wing fact checkers are forced to document it, you know it’s bad.

Almost all politicians lie. As a country, we’re used to that. In fact, we’re so used to it, we long ago stopped caring about being lied to and, instead, began to judge candidates by how good they are at lying. It has become a test of competence. Bill Clinton is a perfect example. In large part, he became a two-term president because voters admired the intelligence and competency displayed in his line of BS.

Same with Trump, whose BS abilities are the stuff of legend.

We do start to care about being lied to when our health insurance is stripped away from us, but Obama-sized lies that really do matter don’t happen very often.

One of Warren’s big problems is that she’s a terrible liar. Instead of displaying her savvy and competence, her lies are so ham-handed, they expose her incompetence and prove she is in no way prepared to become the next president. The terrible idea that is Medicare for All isn’t what killed her frontrunner status last month; it was how terrible she was at lying about it.