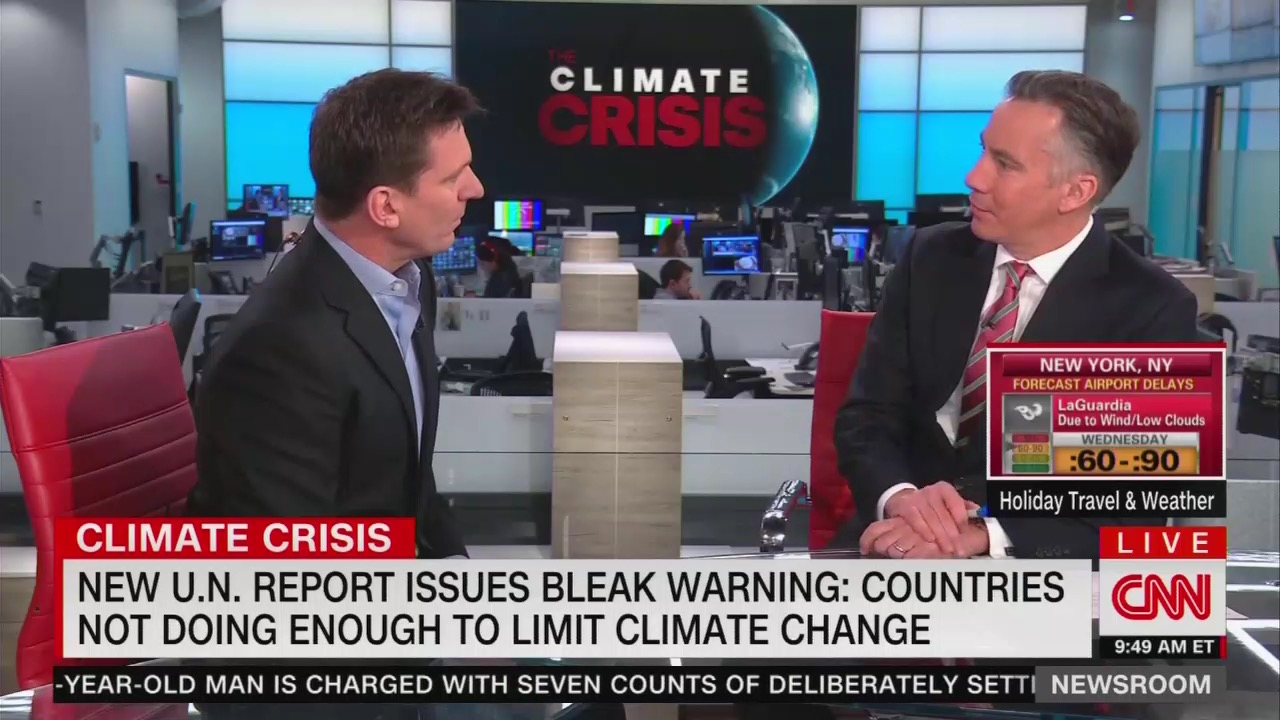 CNN Newsroom co-host Jim Sciutto and “climate correspondent” Bill Weir spent time Wednesday warning it may be “too late” to stop the upcoming environmental global catastrophe. While most Americans are going to be enjoying their families and remembering what they are thankful for this holiday, the CNN duo claimed families would be sitting around worrying about how the world is going to become uninhabitable in the next decade.

Sciutto opened the segment hyping a new United Nations report which warned, humanity was running out of time to stop the impending catastrophe (gee, where have we heard this before?):

“Folks, this is important. A new United Nations report warns that countries are running out of time to limit — just limit, the climate crisis and it could soon be too late to prevent temperatures around the world from rising to near catastrophic levels. This is real!” Sciutto fretted, really laying on the dramatics.

“It paints a bleak picture not just because of the warming but because of the time that we have as a race. To stop it. Not even stop it, slow it down, is running out!” he gushed to CNN’s Bill Weir.

Weir scolded politicians for not acting in the 1980s when scientists were warning them, because we wouldn’t be in the “crisis” we were now, if they had. As NewsBusters has reported, the media’s Chicken Little routine about the environment has been going on for over a century. Even television journalists were saying that we were all going to die soon too as far back as 1970, when Walter Cronkite warned, “Act or die!”

Regardless, Weir blamed the “bleak” state of the earth on President Trump. Weir snarked Trump’s “legacy” would be “damaging” our relationship with China and pulling out of the Paris Accord, while praising the Obama administration for that climate agreement.

Sciutto, who worked for President Obama, of course agreed. He invited Weir to attack Trump, and Fox News as being beholden to an ulterior agenda (which of course, could never be said about climate alarmists):

SCIUTTO: Is there any doubt to the science? Of course, on other networks and from the President you’ll hear, ‘well, do we really know?’

WEIR: No. But those are the talking points that have been fed into this by fossil fuel interest much the way tobacco companies did the same with the dangers of smoking. Deliberate misinformation campaigns. So, yeah, if you watch Fox and marinade in that you think that there is some, but the latest analysis that just came out is no longer 97% of scientists agree. It’s 100%…

In case it wasn’t clear, Weir added we needed to “brace” ourselves “for a whole new definition of life on Earth as we know it.”

Sciutto agreed, listing “storms” as an example of climate change. Weir urged Americans to pressure Congress and businesses to make the environment a priority, while they were discussing the problem with their families on Thanksgiving:

The most effective things that folks can do when you’re sitting around on Thanksgiving talking about it, as a citizen laying on your elected leaders but also as a consumer laying on the brands you care about, saying ‘Hey, what are you doing about it?’”

Yes, I’m sure that’s what the average family is going to be talking about at their dinner tables this Thanksgiving.