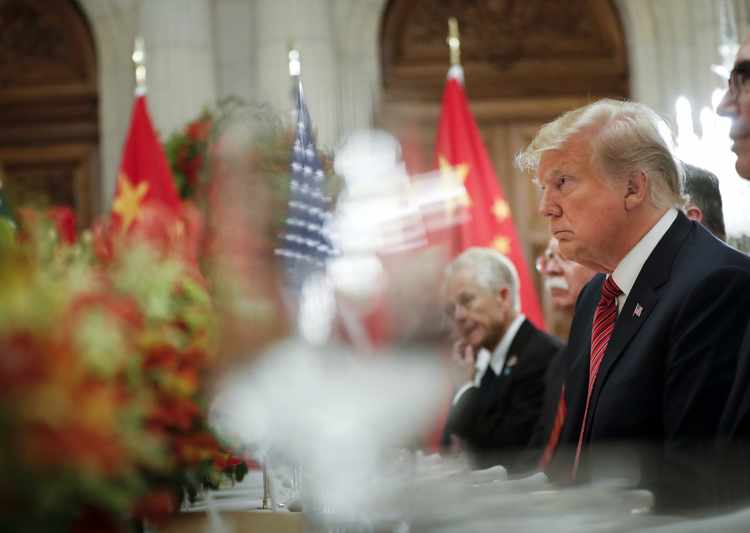 The headlines and data emanating from China and from America in recent days illuminate the diametrically opposed trajectories of these two great powers. For China, young freedom fighters in Hong Kong continue to demand the independent rights of their island, thwarting the Communist Party’s efforts to quash them. Concurrently, economic malaise spreads as China’s command-centered growth model sputters, partly because of the confrontation forced by President Trump.

Meanwhile, across the Pacific in America, the policies of that same leader have created expanding wages and burgeoning optimism. In direct contravention to the unrest in China, America this week welcomes a calendar that captures the essence of our national potency. On Thanksgiving, we gathered to show appreciation for the blessings bestowed upon us, as a country and as individuals. The day centers on family and feasting. Then, Black Friday kicks off a frenzy of consumption as holiday shopping dominates our land. Unlike any other country on Earth, America celebrates this apparently incongruous juxtaposition. We are, at once, a deeply idealistic and religious people – and also one thoroughly committed to capitalism and material prosperity.

This Black Friday, the outlook for America’s economic success brightens, and portends well for a robust Christmas shopping season. In the dynamic realm of business, confidence begets confidence. Thankfully, the American consumer presently displays a level of belief unseen in decades. For example, the widely followed University of Michigan survey of consumer sentiment recently exceeded expectations with a reading above 95.0 for the 30th month out of the past 35, a record of sustained optimism unmatched since the height of the late-’90s Internet boom.

It’s no wonder consumers project confidence, because their paychecks and labor market options grow apace. In fact, wage growth has now exceeded a 3% annual rate for 15 straight months, a level achieved in only three months of the Obama presidency. In addition, not only is wage growth much faster overall, but it broadens too, as minorities and workers in the lower segments of the income ladder now lead in income gains.

Financial markets also reflect these Main Street gains, as Wall Street indices set records almost daily. Capital markets’ dizzying ascent reveals that many of the so-called experts on economic matters are too incompetent or just too biased to properly assess the efficacy of Trump’s policies of tax relief, regulatory restraint, and demands for fairness in trade. Consider Nobel Prize-winning economist Paul Krugman, who predicted a global recession because of Trump’s 2016 triumph. In his New York Times opinion piece, he bloviated: “If the question is when will markets recover, the first-pass answer is never.” Instead, consider that builder-related companies that constitute the massively traded XHB Housing ETF have risen 46% in the three years since Trump was elected. By comparison, that sector rose only 6% in the three years under President Obama prior to Trump’s 2016 win. So much for the idea that Trump simply enjoys leftover prosperity from his predecessor.

Another area where the economic pundit class has been proven remarkably wrong is on China. Widespread predictions of doom emanate from the halls of academia and think tanks because President Trump dares to actually implement his campaign promises and demand reciprocity and respect in trade with China. But instead of suffering due to trade negotiations, America thrives, as outlined above. At the same time, it is China that’s feeling the pain as a resurgent America no longer accepts the mercantilist abuses of the Chinese Communist Party.

Consider, for example, that since Trump’s election the Dow Jones Industrial Average has gained an astounding 53% while the Shanghai Composite Index is down 8% over the same period. Reflective of this weakness, last week China reported a stunning 9.9% October drop in industrial profits, the worst reading since 2011. That plunge seems to validate China’s third quarter GDP growth at the slowest pace in nearly 30 years.

Consequently, the appeasers who preach accommodation with the communist junta in Beijing are wrong on three fronts. First, the regime represents the greatest threat globally to America’s economic and national security, and should be approached as an adversary. Disregard the inane lies of China doves such as new 2020 candidate Michael Bloomberg, who declared that “Xi Jinping is not a dictator.” Xi most certainly is a dictator, and a skilled and ruthless one at that. Second, America continues to prosper in the face of present trade tensions. We should ignore the naysayers. Third, we must seize the present opportunity to press the Chinese for fairness and symmetry. Their seriously decelerating economy, plus intense unrest in Hong Kong, put China in an incredibly weak negotiating posture relative to the United States.

We should not blink. For decades, America has played the global game of managed trade “poker” as if we hold a pair of 8’s, when in fact we’ve held a full house all along. Considering the present strength of the U.S. consumer on Black Friday and beyond, perhaps we even have the economic equivalent of a straight flush now. It’s high time we act like it.