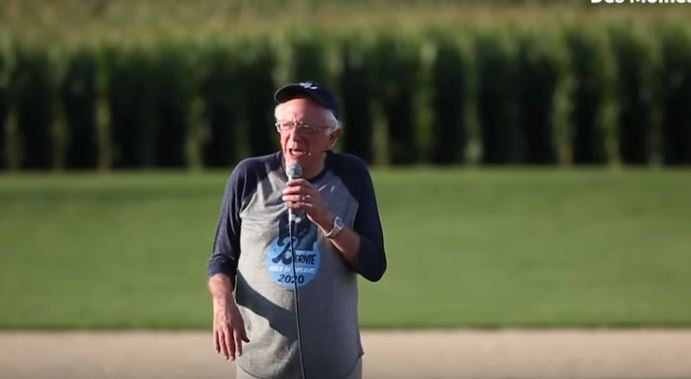 Presidential candidate and socialist U.S. Senator Bernie Sanders is accusing Major League Baseball of something he’s all too familiar with — job killing. He wrote a threatening letter to MLB Commissioner Rob Manfred warning him not to eliminate 42 minor league teams, saying it will be a job-killing move.

“Shutting down 25 percent of Minor League Baseball teams, as you have proposed, would be an absolute disaster for baseball fans, workers and communities throughout the country,” Sanders’ letter says. “Not only would your extreme proposal destroy thousands of jobs and devastate local economies, it would be terrible for baseball.”

Bernie knows a lot about job killing. A 2016 National Review story by Michael Tanner says the senator has previously called for plans that “would reduce GDP by a whopping 9.5 percent, reduce wages by 4.3 percent, and result in nearly 6 million fewer jobs. That’s Venezuelan territory.”

Writing in Sporting News, Joe Rivera says Sen. Sanders (seen above in photo at the Field of Dreams in Iowa) is “standing up” for minor league baseball. His Monday letter to the commissioner of baseball condemns the plan to eliminate 42 low-level minor league teams across the nation and cites “greed” as “the main motive behind the plan.” Rivera’s story completely misses the blatant irony of “job-killing” Bernie harping about eliminating jobs in small-market baseball cities.

Sen. Sanders tells Manfred that down-sizing the minor leagues would be a “disaster” for the communities, stadium workers and fans. Depriving fans in small towns of seeing future major leaguers play would be “unwise” and “unnecessary.”

Sen. Sanders has long railed about greed, and baseball’s downsizing could be grounds for the federal government to take baseball down a notch for that sin.:

“…(I)nstead of paying minor league players a living wage, it appears that the multi-millionaire and billionaire owners of Major League Baseball would rather throw them out on the street no matter how many fans, communities and workers get hurt in the process. If this is the type of attitude that Major League Baseball and its owners have then I think it’s time for Congress and the executive branch to seriously rethink and reconsider all of the benefits it has bestowed to the league, including, but not limited to, its anti-trust exemption.”

Sen. Sanders tells MLB to pay minor leaguers a fair wage and give them the opportunity to join a union. That could be to the benefit of a leftist politician like Sanders because unions contribute a lot of money to Democrat political candidates.

The Sanders letter went public Monday. On Tuesday, 106 congressmen signed a letter to commissioner Rob Manfred “calling for MLB to reconsider such drastic measures in the minor leagues,” writes Eric Stephen of SB Nation. “If enacted, it would undermine the health of the minor league system that undergirds talent development and encourages fan loyalty,” their letter states.

“Baseball is trying to get its ducks lined up now, because a bigger fight is looming,” Stephen writes. MLB’s collective bargaining agreement with players expires in two years and “labor peace is nowhere near guaranteed.” Nor is peace with Sen. Sanders and his intrusive Big Government friends.