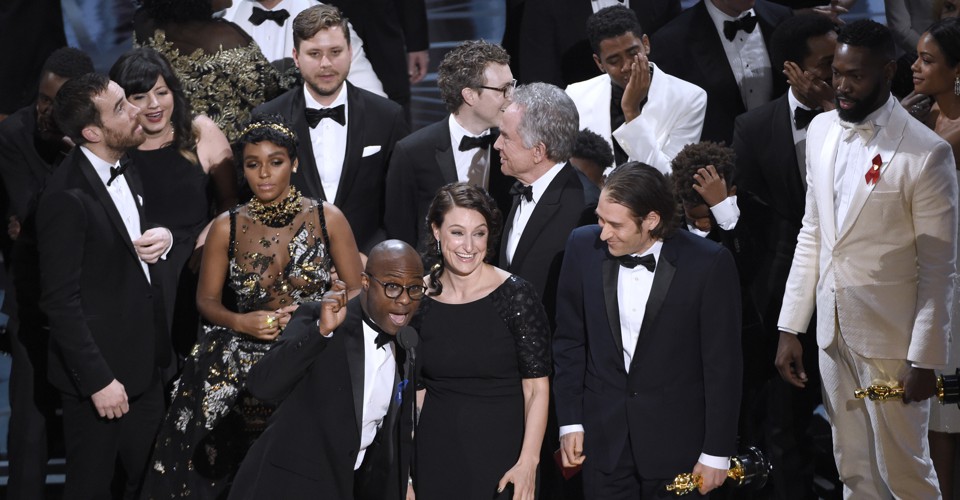 Moonlight won three Academy Awards this year: Best Picture, Best Supporting Actor (Mahershala Ali), and Best Adapted Screenplay for Jenkins and Tarell Alvin McCraney. Last year’s Best Picture winner Spotlight took only two trophies, and in 2015, Birdman won four. The year before that, 12 Years a Slave won three, as did Argo in 2013. In every case, there was another more opulent production that won at least as many trophies, if not more: The Revenant, The Grand Budapest Hotel, Gravity, and Life of Pi, respectively (with all but Budapest winning Best Director but not Best Picture). La La Land seems to belong to this new ticket-splitting norm, where voters chalk up a bunch of technical wins for the glitzy frontrunner, but give Best Picture to the more critically acclaimed, smaller production.

Again, this is not to discount Moonlight’s game-changing triumph. Though movies like Spotlight and Birdman were independent works, they were made on a much bigger budget and distributed by more established indie wings of major studios (Moonlight’s distributor was A24, a company founded only five years ago that has quickly become one of the most respected names in American art cinema). Still, only one major studio has won Best Picture in the last decade—Warner Bros. (for Argo and The Departed). As Hollywood’s major production companies have tilted away from prestige films to focus more heavily on big tentpole franchises, the Best Picture nominations list is mostly filled with indie and “mid-major” companies, (with streaming service Amazon making its own breakthrough this year for Manchester by the Sea).

If things had been already edging in this direction, then Moonlight might be the beginning of an even bigger sea change. Of this year’s nine Best Picture nominees, it is the lowest-grossing (having made $22 million in the fourth months since its release, behind the next lowest Hell or High Water with $27 million). The Oscars used to have a certain reverence for perfectly well reviewed films that broke out in a major way. It’s how consensus choices like A Beautiful Mind, Gladiator, Braveheart, and Forrest Gump took the prize over more acclaimed movies. La La Land fits that mold well—but that mold may have been broken.

It helps that Moonlight was universally heralded, getting the kind of rapturous critical raves that come once in a generation, rather than once a year. It was also a beautifully made film on every level, attracting support from a wider swath of Academy branches (it was nominated for its music, cinematography, and editing along with the expected writing, acting, and directing nods). That’s crucial for a Best Picture win, because people from every Academy branch get to vote on the winners, and it’s what had kept smaller, less technically impressive indie movies from winning in the past. Perhaps next year the trophy will go to some big epic that hits at the box office, like Christopher Nolan’s Dunkirk, and this recent pattern will be upended. Either way, Moonlight’s win is shocking enough to be remembered forever. The thing to watch for now is if it’s a magical Oscars anomaly, or a sign of profound change for the Academy.

David Sims is a staff writer at The Atlantic, where he covers culture.
Category: News
Tag: Atlantic World