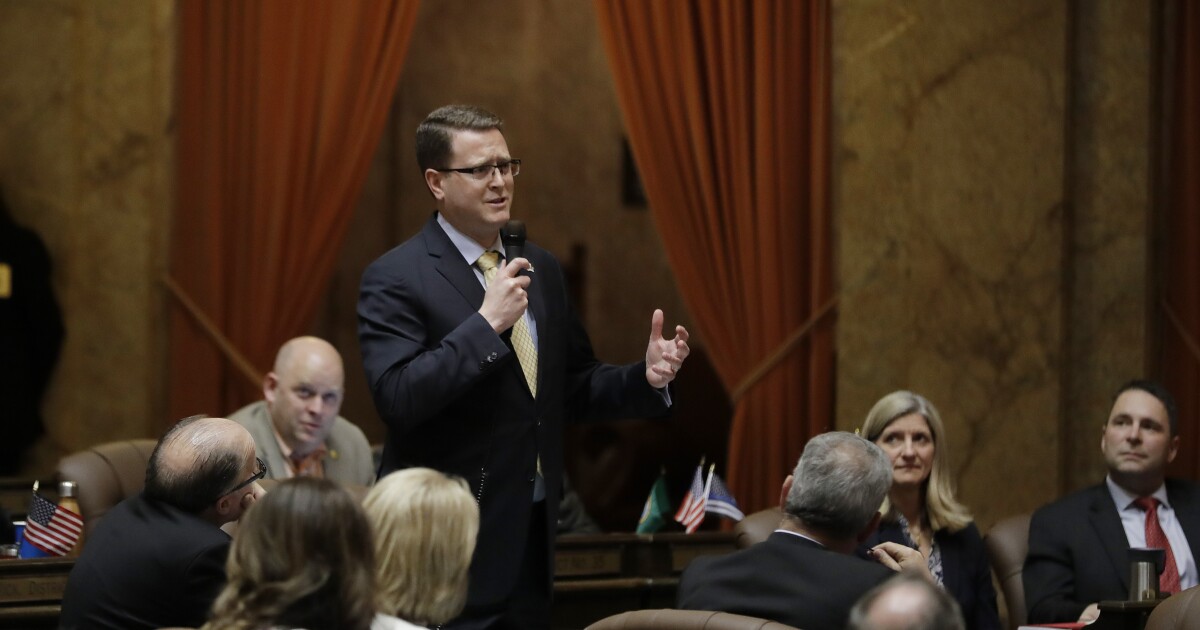 The mayor of this Spokane suburb recently told an audience of fellow conservatives that police should have shot Rodney King. He heard no objections.

Nor was there dissent when a popular pastor urged his congregants during a recent Sunday sermon to gird for war with an anti-Christian government. They applauded.

So it’s perhaps not surprising that Spokane Valley is at the heart of a district where voters keep reelecting Matt Shea, a state lawmaker who distributed a document last year telling Christians to “kill all males” if gay people and abortion advocates don’t yield to fundamentalist religious law after the U.S. government collapses. The six-term Republican, who counts the unrepentant mayor and the doomsday pastor as close allies, wants eastern Washington to secede and form a 51st state called Liberty embodying his style of Christian values.

Shea commands more influence than his state legislative role would suggest, speaking nationally and attracting wide attention in far-right and white supremacist circles. The militia proponent and participant in the so-called patriot movement describes the United States as a Christian nation under siege.

“The real threat that we face in this country is Islamists and Marxists and their sympathizers at the local level,” Shea told constituents recently. “We need to reclaim our Christian moral foundation and not be ashamed of it.”

But Shea may be losing his grip in his district and in Spokane Valley, a city of almost 100,000 near the Idaho state line. In elections this month, he lost majority backing on Spokane Valley’s City Council, one of several local bodies that critics describe as having followed his direction and provided political support.

Shea faces other challenges. Washington House Republicans have stripped him of a party leadership position and some campaign donors have abandoned him. A former FBI agent hired by the House is due to report Monday on a three-month investigation to determine whether Shea incited political violence, a finding that could lead to his censure or removal from office.

“His following is shrinking, but I don’t know if it’s shrunk enough,” said Spokane County Sheriff Ozzie Knezovich, a fellow Republican who reports receiving death threats from Shea supporters. “He has driven people out of politics with intimidation and fear.”

Shea, 45, is a square-jawed attorney and U.S. Army veteran who served in Bosnia and Iraq, receiving a Bronze Star. A graduate of Gonzaga University and its law school, he chairs the Coalition of Western States, an organization that debuted in 2014 at Cliven Bundy’s Nevada ranch to support the Bundy family‘s armed standoff against federal agents. Shea, who also supported the Bundy-led 2016 occupation of the Malheur National Wildlife Refuge in Oregon, founded a chapter of the anti-Muslim group ACT for America, considered a hate group by the Southern Poverty Law Center.

Shea, who has been in office since 2008, hosts a “Patriot Radio” talk show on the American Christian Network, but avoids speaking to reporters and addressing the general public in his district. He did not respond to repeated requests for an interview.

Greater Spokane, where Shea was born, combines with Coeur D’Alene, Idaho, to form a region of 720,000 people, more than 85% of whom are white. The arid, deeply conservative territory is a world away from rainy Seattle, the largest city in the mostly progressive Pacific Northwest.

North of Coeur D’Alene, about a half-hour drive from Spokane Valley, is the former headquarters of Aryan Nations, a neo-Nazi organization founded in the 1970s and broken up after the Southern Poverty Law Center won a $6.3-million judgment against it. Farther north is Ruby Ridge, the site of a deadly 1992 standoff between a white separatist family and federal agents.

More recently, this Inland Northwest region has become known among survivalists as the American Redoubt, where patriots and “preppers” — those who stockpile food and ammunition for the end days — can migrate to establish a homeland. The syndrome is outlined in a public radio podcast called “Bundyville,” which describes Shea’s activities and traces his ties to Marble Community Fellowship, a religious community north of Spokane. There, in 2017, he endorsed a group called Team Rugged that was training young people for armed combat.

Yet as apartment buildings displace a patchwork of Spokane Valley agricultural land in the rapidly developing city, younger, more liberal people are moving in as well. The influx alarms many longtime conservative residents, said Beva Miles, chairwoman of Republicans of Spokane County, a comparatively moderate group distinct from the Spokane County Republican Party.

Miles believes her organization made a difference in the recent Spokane Valley elections and local Republican Party appointments.

“We’ve managed to get the word out about Matt Shea’s extreme agenda,” she said, “so you see a shift to more reasonable, less divisive elected officials.”

Local libertarians and far-right activists have also formed organizations such as Northwest Grassroots, which holds monthly open meetings at a Spokane Valley restaurant. The organization drew criticism last year for hosting James Allsup, a far-right provocateur whose views have been widely condemned as racist.

Higgins said he was surprised the officers didn’t shoot King, because “it would have been justified,” given that he was “higher than a kite.”

Members of the audience cheered on the mayor, who stood by his statements when contacted subsequently by a reporter, saying that he cited King’s beating to illustrate how circumstances can be taken out of context. He said that commonly watched video clips of the beating omit initial moments when King acted in a way that would have justified fatally shooting him — just as leaked statements by Shea exclude context that would show he’s not a white supremacist promoting holy war.

During his talk, Higgins proceeded to castigate two men who defected from Shea’s political organization and criticized another local man known for renouncing a white supremacist upbringing in Idaho.

The two defectors, Jay Pounder and Tanner Rowe, leaked a four-page manifesto last year titled “Biblical Basis for War,” in which Shea described God as a “warrior,” outlined strategies of a “Holy Army,” and advocated killing all males who did not accept biblical law and bans on abortion and same-sex marriage. The tract created an uproar, but Shea said it merely summarized a scholarly sermon on Old Testament warfare — an interpretation disputed by theologians who reviewed it.

The evening before Higgins’ talk, the third man he would criticize — John Smith, a Shea critic who broke from a white supremacist past — received an award at a progressive Christian church in Spokane Valley. Smith, a former Republican state senator, was honored by the pastor of Veradale United Church of Christ for courage in exposing the “racist and extremist ideology” of Shea and the Marble religious community.

Pastor Gen Heywood coordinates Faith Leaders and Leaders of Conscience, one of several organizations, including the Spokane Police Guild and the local branch of the National Assn. for the Advancement of Colored People, that have called for Shea’s resignation.

Heywood’s group holds monthly vigils to oppose white supremacy and Christian Dominionism, an ideology that seeks to institute biblical law. It stands in contrast to Spokane’s Covenant Church, whose Pastor Ken Peters, the end-days preacher who told congregants recently that the government was coercing Christians, leads outdoor services across from Planned Parenthood to protest abortion.

Accepting his award Nov. 12, Smith paraphrased an Old Testament verse, saying that a person who witnesses a wrongdoing and doesn’t speak out, shares it.

“What I would hope,” Smith said, “is that Matt Shea is driven to a point of personal conscience.”