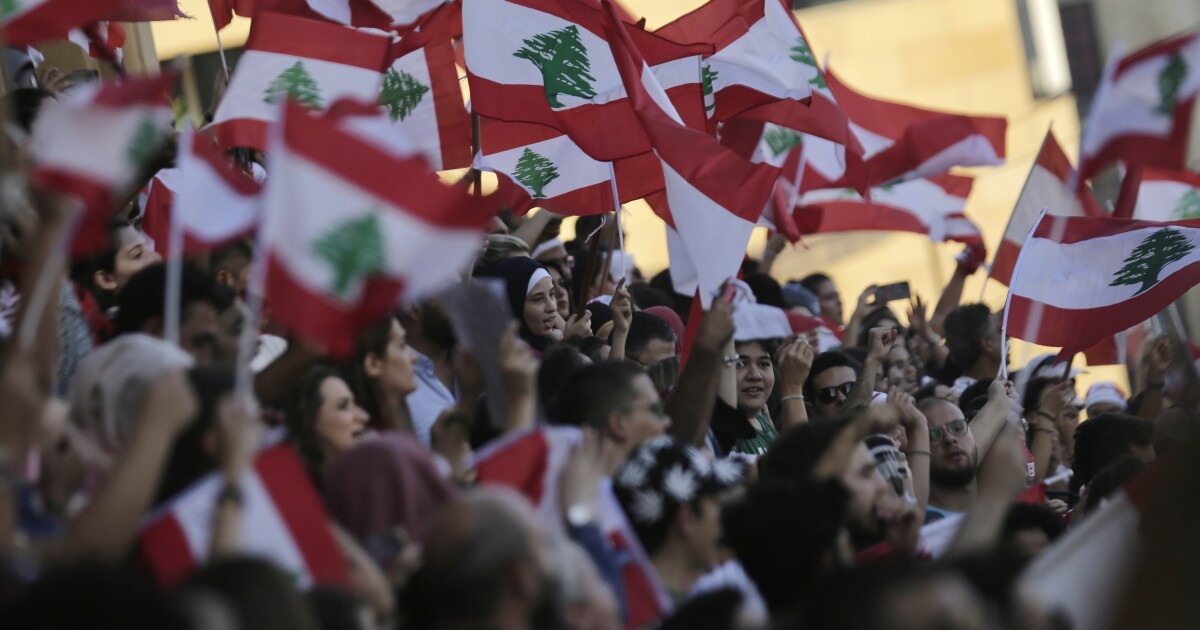 As Lebanon convulses under an unprecedented wave of antigovernment protests, U.S. security assistance to the country’s army — viewed as a guarantor of stability — remains suspended by the Trump administration with little explanation, even as Lebanon teeters towards a financial and security meltdown.

The military assistance, worth $105 million in materiel and ammunition for the Lebanese Armed Forces, has been in limbo for months pending approval from the Office of Management and Budget. But it has taken on renewed significance for U.S. lawmakers amid an impeachment inquiry into whether President Trump held up $391 million of military aid while pressing Ukraine for political favors.

“This is very disturbing but eerily familiar,” said Sen. Chris Murphy (D-Conn.) in a phone interview on Wednesday. “There’s a hole in the funding with no reason given by the administration … and no accountability so we can find the person holding it.”

Murphy traveled to Lebanon earlier this week and met with Lebanese military officials.

The halt, he said, appeared to be the the work of “one or two people” at the White House’s National Security Council.

“The White House is illegally holding back the aid; it doesn’t have the authorization to stop aid that has been authorized by Congress,” Murphy said. “I’ve yet to find anyone who supports withholding the funding from the Lebanese armed forces, so somebody has to solve the mystery.”

Administration officials say the aid is being held as part of a broader review of foreign assistance. But several key allies of President Trump have campaigned to stop the money.

Since the summer, Israel has lobbied for the aid’s suspension, Israeli media reported, until the Lebanese army extricate itself from Hezbollah, the Iran-backed Shiite faction that has military and political wings.

The group, which Washington designates as a terrorist organization, is viewed by many pro-Israel U.S. lawmakers as the de facto power in Lebanon and has infiltrated state institutions.

In 2006, Hezbollah and Israel fought a month-long battle in Lebanon’s southern region. At least 1,200 Lebanese were killed, most of them civilians, as well as 160 Israelis, mostly soldiers.

Several of Trump’s other allies, whose support he needs in his reelection bid, have lobbied for the aid to be held up, against the wishes of the State Department and Pentagon. These include U.S. Christian evangelical groups, who profess affinity with right-wing Christian factions inside Lebanon, and conservative Republicans like Sen. Ted Cruz of Texas. All see Hezbollah as a growing threat that ultimately benefits from the aid.

Cruz, in a bill he introduced in the Senate over the summer, demanded the Lebanese army be required to disarm and reduce the influence of Hezbollah before aid is released. But that is not a consensus view among U.S. lawmakers.

“Of course we have a concern for Hezbollah’s position inside the Lebanese government, but the counterweight to Hezbollah is the Lebanese armed forces,” said Murphy. “I don’t know why the administration that claims to care about confronting Hezbollah would refuse to fund the one institution in Lebanon that is actively providing that counterweight.”

Administration officials, meanwhile, insist the assistance would be forthcoming and was unaffected by Israel’s demands.

In Nov. 6 testimony before a U.S. congressional panel investigating whether to impeach Trump, David Hale, the No. 3 official in the State Department, said he learned in late June that the aid to Lebanon had been frozen by the White House but was never given a reason.

He said he thought it was part of a broader, general review of foreign aid that the Trump administration has ordered to determine the “efficacy” of aid.

Assistant Secretary of State for Near East Affairs David Schenker also said this month that the United States “has a lot of confidence in the Lebanese armed forces .… We think that it’s a valuable bilateral security arrangement and we plan on continuing it.”

“This not on hold, per se,” he said in a briefing with reporters in Israel. “This is part of the process. No money has been delayed in providing to the [Lebanese armed forces]. They did not miss getting any equipment.”

The suspension would be problematic even in normal times for Lebanon, a tiny Mediterranean country that emerged from a 15-year civil war in 1990 and has since become a proxy battleground in the shadowboxing between the U.S. and Iran.

Yet these are not normal times. Since Oct. 17, more than a quarter of the country has taken to the streets to protest decades of colossal mismanagement and corruption by the country’s leaders.

Though the protests have been largely peaceful, the army has nevertheless been called in to quell sporadic bouts of violence between anti-government protesters and counterdemonstrators said to be affiliated with Hezbollah and its allies in the Lebanese government.

The army may soon have to deal with a larger shock wave, as the Lebanese currency continues to slip and the country’s political class refuses to form a government in line with protesters’ demands.

Special correspondent Noga Tarnopolsky in Jerusalem contributed to this report.