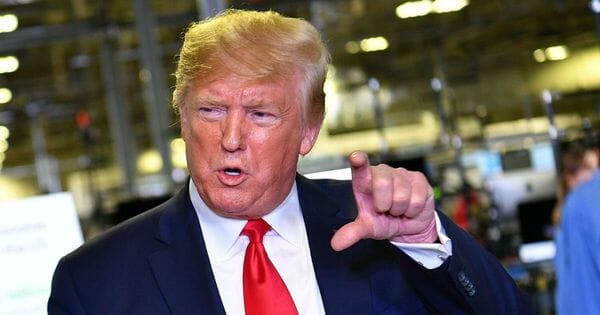 It has been pointed out for several years now that Big Tech companies are biased against conservatives, and recent policy changes by Google will only bolster that perception.

The Hill reported that Google, which controls roughly 43 percent of the online advertising market, recently adopted changes to its policies that would effectively end the practice of micro-targeted political ads, which use real-world information about online users — such as political leanings and voter lists — to appropriately target them with advertisements they would likely be interested in and receptive to.

The new policy will allow political advertisers to target ads toward users based only on age, gender and ZIP code, completely undermining the huge advantage President Donald Trump’s 2020 re-election campaign had earned through copious collection of data.

“Google’s latest arbitrary rule changes are a blatant attempt to suppress voter information, knowledge, and engagement in the 2020 election. These actions will lead directly to suppressing voter turnout,” the statement read.

“There can be no denying that President Trump and his campaign have built the greatest digital operation in all of politics, and that Google’s decision will disproportionately impact both the Trump operation and all of the Republican candidates and organizations that derive strength from it,” the statement continued.

“What’s more, given the growing and documented cases of anti-conservative bias in Silicon Valley, we are highly skeptical that such a ban would be applied equally to conservative and liberal organizations.”

Do you believe that big tech companies are biased against conservatives?

The Hill reported that the Democrats’ national committees had issued a similar statement expressing outrage at the new Google policy last week, but while the impact of the policy may be bipartisan, it will be much greater on the GOP due to the disparity between Republican and Democratic digital operations.

The statement from the Trump camp gave a nod to that bipartisan impact.

“Millions of Americans rely on Google’s platform to get involved in our democratic process, from educating themselves on the issues, to becoming more politically engaged with candidates, and to learning when and where to cast their vote,” the statement read.

“By severely restricting political advertising, Google is stifling the ability of citizens to participate in our democracy. This will affect voters in the Democrat primaries as well as in the 2020 general election.”

The statement explained that the data Google has now restricted political advertisers from using had been offered up voluntarily by users as a sort of “please communicate with me” message that aided people in learning about issues, campaign events and volunteering, fundraising efforts and even when and where to cast a vote.

“Google is now arbitrarily saying this is not allowed,” the statement read. “There is no other description for this than the muzzling of political speech. Google is clamping down on voter engagement and suppressing voter turnout.”

The statement went on to note how Google has in the past “celebrated” its own role in increasing political participation and voter engagement and is now, in effect, doing the exact opposite.

With a nod to Twitter’s recent decision to prohibit all political advertising — a policy that will be difficult to enforce equitably — the statement said that “much has been made of Twitter’s equally concerning decision to ban political ads and suppress speech, but because advertising on that platform is ineffective and only a tiny percentage of Americans use Twitter, their impact is insignificant.”

“Google, however, is a serious platform with very deep reach across the entire country.”

Indeed, according to The Hill, Google and Facebook combined account for nearly 57 percent of all online advertisements.

“In short, Google has made an extraordinarily poor decision which will lead to less-informed voters, lower voter engagement, and voter suppression. Google should immediately reverse its decision in order to ensure they do not suppress voter turnout during both the Democrat primaries and the 2020 general election,” the statement concluded.

According to The Hill, a spokesperson for Google acknowledged the “concerns” raised by both Democrats and Republicans about the impact the new policy would have on their respective “targeting strategies,” but defended the “balance” the company had struck between allowing broadly targeted political ads and excluding the more narrowly tailored ones that are far more effective.

Google can claim all it wants that there is no partisan purpose behind the new policy, and Democrats can even complain about the policy, too — as they should — but it is difficult to dismiss the tech giant’s decision as entirely nonpartisan when the new policy will disproportionately affect the Trump campaign and its digital dominance.