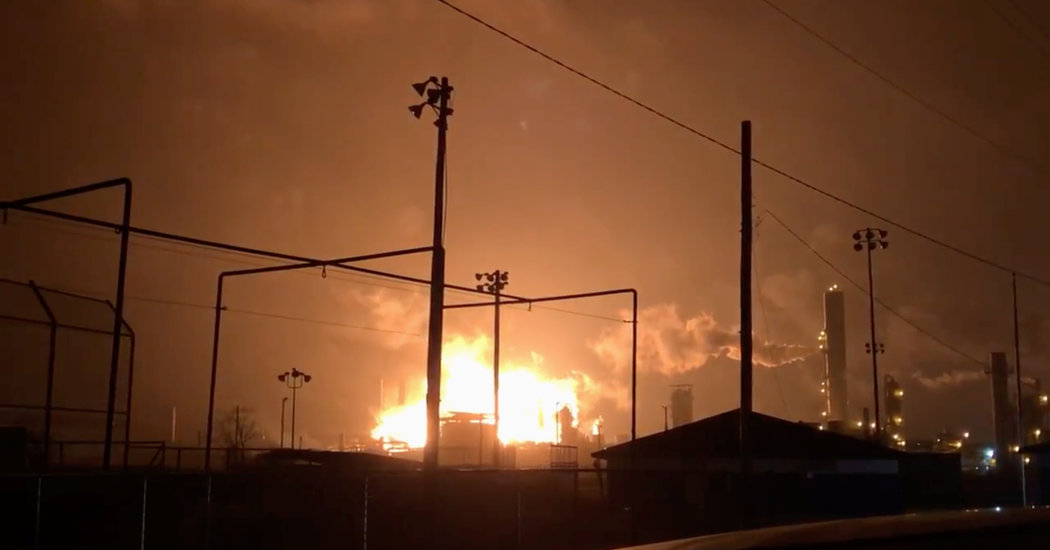 PORT NECHES, Texas — Holiday plans for tens of thousands of families in southeast Texas were upended Wednesday after a pair of explosions at a chemical plant prompted an evacuation order for at least four surrounding cities.

Local officials, fearing a new round of explosions, ordered the evacuation of about 30,000 people near the chemical plant, where a powerful overnight blast left at least eight people injured. The evacuation order covers areas of Jefferson County within four miles of the Texas Petroleum Chemical plant in Port Neches, 94 miles east of Houston near the Louisiana line.

The order was expected to cause thousands of people to flee their homes the day before one of the busiest holiday weekends, as local, state and Red Cross officials scrambled to open shelters and send in supplies.

“Who knows what we’re going to do for Thanksgiving tomorrow, but we’re still preparing,” said Bailey Dykes, a 23-year-old speech language pathologist who fled with her relatives from Port Neches to her brother’s home in nearby Beaumont after the second explosion.

Ms. Dykes lives in Fort Worth and had already been wary of driving to Port Neches, her hometown, for Thanksgiving after seeing videos of the first explosion Wednesday morning. Her mother assured her at the time that their home, which is about a mile from the plant, was fine. So Ms. Dykes drove five hours to Port Neches, but just as she began to settle in, the second explosion rattled the house.

Soon, she and her family were loading a car with necessities — three buttermilk pies, one pecan pie, frozen corn, salt and pepper — not sure whose table they would be eating at this year. Ms. Dykes said the turkey was with her grandparents, who had hunkered down in the town of Groves, disobeying a mandatory evacuation order there.

The initial explosion at the plant shortly after midnight sent plumes of fire skyward and shattered the windows in nearby neighborhoods. A second blast on Wednesday afternoon launched a ball of fire high into the sky, prompting the new evacuation order. That blast propelled a tower “like a missile,” said Jeff Branick, who oversees the county’s Office of Emergency Management and who serves as the county judge, the top elected official in Jefferson County.

“The concern is that if another one were to launch — and there are a bunch left — and it were to go into the tank farm, the results would be catastrophic,” said Judge Branick, who lives near the plant and whose front and back doors were blown open and broken by the force of the first explosion.

Gov. Greg Abbott spoke to Judge Branick on Wednesday. The governor posted on Twitter that several state agencies were involved, including the Texas Commission on Environmental Quality, and said he and his staff were working with local officials “to ensure they have all resources needed to respond to this.”

Refinery and plant explosions are an unfortunate yet common occurrence in oil-rich Texas.

Residents who live near sprawling oil and chemical complexes in parts of southeast and east Texas grow as accustomed to fires and false alarms as Oklahomans do to tornadoes and as Californians do to earthquakes. Jefferson County alone is home to four refineries and 32 chemical plants, and the history of the wider region can be told in some ways through explosions. The worst industrial accident in American history unfolded 100 miles west of Port Neches: On April 16, 1947, hundreds of people were killed in Texas City after a blast on a ship carrying ammonium nitrate set off huge fires.

“That thought sits in the back of your mind because there are refineries everywhere,” Ashlyn McDaniel, 23, an insurance agent who grew up in Port Neches, said from her apartment in Nederland, where she was defying an evacuation order.

“We’ve all thought, ‘What if one of these things goes up in flames one day?’” she said. “But we never really imagined it would happen.”

The scope and timing of the Port Neches evacuation — affecting more than 10 percent of Jefferson County’s 255,000 residents and coming before the holiday — alarmed residents and officials.

The evacuation order included all those living in Port Neches, along with the cities of Groves, Nederland and the northern part of Port Arthur, as well as the unincorporated communities of Central Gardens and Beauxart Gardens.

All day long, Parrish Bird watched the “ominous gray and green” smoke boiling at the plant from Nederland, a town of 17,500.

She was at a bank when she heard about the mandatory evacuation after the second explosion. Ms. Bird rushed home, and she and her daughter, a 20-year-old college student, gathered their belongings. She had planned to prepare dishes to take to her parents’ house in nearby Orange for Thanksgiving Day dinner, so she improvised, and decided to make the dishes when she got there.

“I threw all my ingredients into a bag,” she said on Wednesday night from her parents’ house.

The initial blast, just before 1 a.m., happened as about 30 people were working at the plant. Two employees and a contractor were injured, but all were later released from a hospital, company officials said. Five residents were also injured by flying glass, according to the Office of Emergency Management.

It was not clear what caused the first explosion, which happened in a distillation tower that resembles a grain silo. The blast occurred in an area of the plant that processes a colorless gas known as butadiene used in the production of synthetic rubber and plastic.

In Port Neches, a city of about 13,000, residents described the bewilderment and fear of waking up to a blast and the sight of flames.

“I thought I was dreaming,” said Kym Johns, 48, whose home is separated from the plant only by a street and a vacant field. Her garage doors caved in. Sheetrock fell to the floor. A neighbor was thrown out of his chair, she said.

She and her husband, Daren, fled their home, but they returned later in the morning to pack up some things, trying to avoid breathing in the thick black smoke that was pouring out of the plant. “Right now, I’m scared to breathe the air,” she said.

Regina Marple lives about a 30-minute drive from the plant, but was still shaken awake by the explosion.

“It scared me and I jumped up,” said Ms. Marple, 34. “I’ve never experienced an earthquake, but that’s what I thought it would be like.”

Her husband was working at a different plant in Port Neches at the time of the explosion, and Ms. Marple did not immediately know where the explosion had occurred. She texted him but did not hear back right away. After 15 long minutes, he called her, relieving her worst fears.

“I don’t think I took a good breath until I knew he was safe,” she said.

The explosion started a fire that burned unchecked into the day on Wednesday. At about 2 p.m., as wind continued to blow smoke from the plant, a column collapsed, causing the second loud blast, which sent the tower hurtling into the air. Judge Branick then extended the evacuation zone.

Earlier, officials said the fire was too dangerous to approach, so they were instead dousing equipment with water and isolating parts of the plant by cutting off a pipeline.

“I don’t think the focus is really on putting the fire out, it’s letting the materials that are in there burn themselves out and keeping the surrounding tanks cool,” Judge Branick said at a morning news conference.

Mayor Glenn Johnson of Port Neches said he had been awakened by the blast, which damaged his home. He lives in the area close to the plant that has been evacuated.

“I understand what getting blown out of bed means now, because you’re up quick,” Mr. Johnson said.

“They’ve always been very good to the city, and we appreciate them, so our hearts go out to them as well,” Mr. Johnson said at a news conference.

The frequency of a string of fires and explosions in recent years has renewed concerns about the adequacy of health and safety regulations as well as the environmental effects from the accidents.

Earlier this year, a disastrous fire burned for days at a petrochemical facility on the outskirts of the Houston metropolitan area. It was followed by another blaze at a chemical plant northeast of Houston that left one person dead and two others critically injured.

A deadly explosion in 2013 at a fertilizer plant in West, Texas — one of the worst industrial disasters in state history — was powerful enough to register as a magnitude 2.1 earthquake, and nearly obliterated an entire neighborhood. In 2016, federal officials determined that the fire had been intentionally set.

Another plant, owned by a French chemicals company, exploded in 2017 in Crosby, about 30 miles northeast of downtown Houston, when the city was ravaged by a tropical depression.

Crystal Holmes, a spokeswoman for the Jefferson County Sheriff’s Office, said that it would take time to evaluate whether the Port Neches fire was “a natural or man-made disaster.”

“It looks, just visually, about half of the refinery is on fire,” Ms. Holmes said.

Troy Monk, the chemical company’s safety director, said that the large plumes of smoke from the fire might cause respiratory irritation for people nearby.

“You don’t want to be downwind from this,” he said.

The facility has about 175 full-time employees and 50 contractors, and spreads across 218 acres. All of the employees were accounted for shortly after the explosion, Mr. Monk said. In addition to butadiene, the plant also produces raffinate, a refining byproduct used to make other chemicals. The combined production capacity for the plant is more than 900 million pounds per year, the manufacturer said on its website.

Ms. Marple, who had feared for the safety of her husband after texting him, said her husband came home from his job at the neighboring plant and went to sleep. She said she was thanking God that he and the other plant workers in the city were all alive.

“It really brings home the dangers they go through every day,” she said.