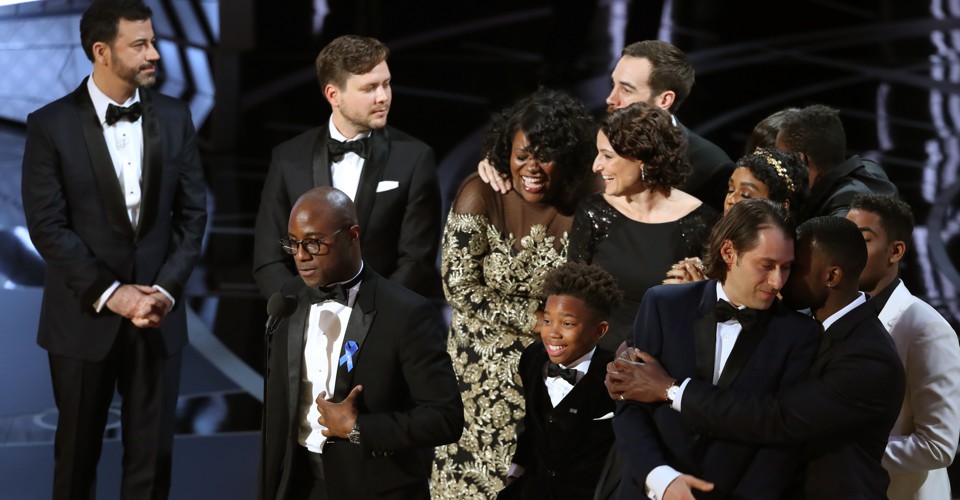 The whole thing was also, however, a reminder of how rare it has become for audiences to witness, collectively, something that is truly Unexpected. This was live TV, with all the potential human error that live TV can bring—chaos, correction, drama, grace—at its depths but also its heights. What happened on Sunday hewed to roughly the same mechanics that gave the world all those Left Shark memes, and those “Nevertheless, She Persisted” tattoos, and the term “wardrobe malfunction”: The Oscars evoked caring by way of surprise. The Best Picture flub has become infamous overnight for roughly the same reason its predecessors did: It is exceedingly rare, in the highly produced world of mass media, for expectations to be thwarted.

We know so much, nowadays. We are, in fact, sure of so much—about politics and human psychology and Hollywood awards shows and the correct ingredients of guacamole. During a time when Google has made so much information instantly attainable, knowingness has become a default presence in American cultural life. Oooh, that show is supposed to be excellent. That movie is supposed to be terrible. Poke bowls are the thing now. Big cultural events, the stuff of the Grammys and the Emmys and the Oscars, are in many ways the culmination of that posture: We know precisely what to expect of them. We can report, as they play out, that everything went according to plan, because we knew from the beginning what they were supposed to be; we can do that reporting, as well, with a note of disappointment. There are few things duller, after all, than met expectations.

In that context, the Beatty-Dunaway-Oscars flub was a gift to audiences (and perhaps to ABC’s future live-audience ratings). It was also Chuck Klosterman’s point to Maron, at once proven and proven wrong. Here was the anything-can-happen logic of the live sporting event, applied to Hollywood’s highest, most ceremonialized, and most expectation-driven, of rituals. That was a powerful thing: During a moment in the United States that so often takes for granted that “reality” is something that can be produced as well as experienced, the Best Picture Oscars flub was a powerful reminder that reality, still, has its own production values.

Yes, the flub was many other things, too: a shame for Moonlight, which so richly deserved to win Best Picture and whose victory threatens to be overshadowed by the mistake and its ensuing dramas. A shame for La La Land, whose producers delivered their full acceptance speeches before learning that their “win” had been announced in error. A field day for photographers both professional and non-, who snapped reaction shots onstage and backstage and among the celebrity audience. A moment of grace, as La La Land’s producer, Jordan Horowitz, met Jimmy Kimmel’s cheeky suggestion that everyone should get an Oscar with a politely defiant “I’m going to be really thrilled to hand this to my friends from Moonlight.” And also, sure: a metaphor for the slings and arrows of the 2016 election. A ratification of pop culture’s current obsession with alternate realities. A vehicle for many, many jokes at the expense of Steve Harvey.