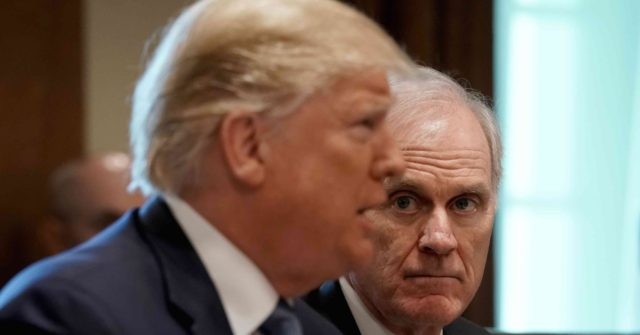 Former Secretary of the Navy Richard Spencer, who was fired earlier this week, published an op-ed Wednesday evening in the Washington Post declaring that President Donald Trump “has very little understanding of what it means to be in the military, to fight ethically or to be governed by a uniform set of rules and practices.”

Spencer was commenting on the president’s intervention in the case of Chief Petty Officer Eddie Gallagher, a U.S. Navy SEAL Special Warfare Operator who was recently acquitted of murdering an enemy combat from the so-called “Islamic State” (ISIS). Trump urged the Navy to move Gallagher out of pre-trial confinement. After he was acquitted of murder, but convicted of taking a photograph with the corpse of the dead ISIS member, Trump restored Gallagher’s rank and also told a review board not to remove Gallagher’s Navy SEAL Trident before he retired.

Secretary of Defense Mark Esper fired Spencer on Sunday after it emerged that Spencer had spoken to the White House about a possible compromise without keeping Esper informed. In his article, Spencer admitted that claim.

However, Spencer took rhetorical shots at the commander-in-chief, whom he accused of violating military ethics:

President Trump involved himself in the case almost from the start. Before the trial began, in March, I received two calls from the president asking me to lift Gallagher’s confinement in a Navy brig; I pushed back twice, because the presiding judge, acting on information about the accused’s conduct, had decided that confinement was important. Eventually, the president ordered me to have him transferred to the equivalent of an enlisted barracks. I came to believe that Trump’s interest in the case stemmed partly from the way the defendant’s lawyers and others had worked to keep it front and center in the media.

This was a shocking and unprecedented intervention in a low-level review. It was also a reminder that the president has very little understanding of what it means to be in the military, to fight ethically or to be governed by a uniform set of rules and practices.

Spencer is not the first former Navy leader to criticize the president after leaving his post, nor the first to use a liberal media outlet to deliver his message. Last month, Admiral William McRaven (Ret.) published an op-ed in the New York Times in which he argued that President Trump should be removed from office “the sooner, the better.”