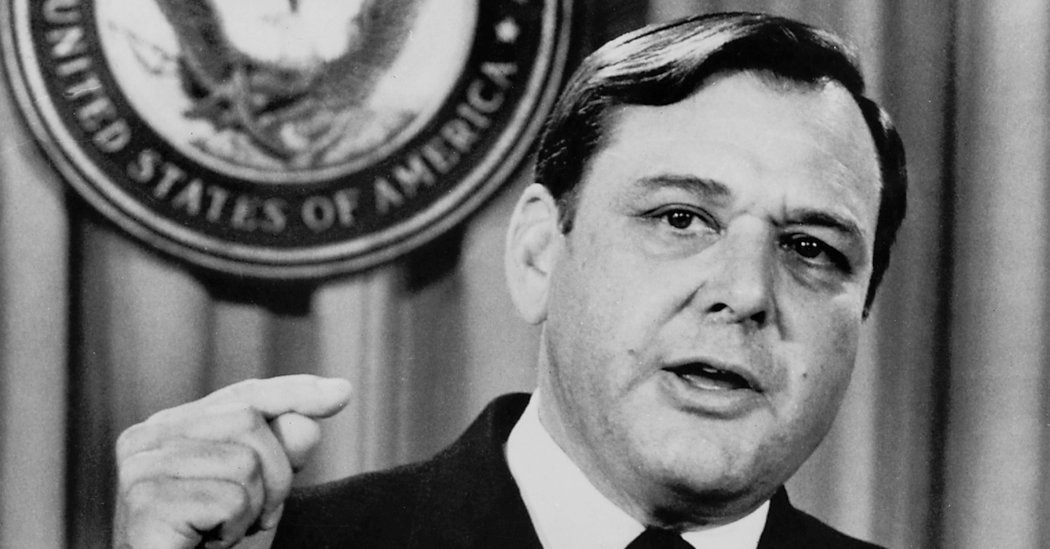 Adm. James L. Holloway III, a combat veteran of three wars who served as the chief of naval operations in the 1970s and later headed an investigation that strongly criticized the military’s planning of the failed 1980 mission to free hostages held at the American Embassy in Iran, died on Tuesday in Alexandria, Va. He was 97.

His death was announced by the Navy.

Admiral Holloway was the Navy’s senior uniformed officer and a member of the Joint Chiefs of Staff from 1974 to 1978, serving under three presidents.

He was an early proponent of nuclear propelled ships, having studied under Admiral Hyman G. Rickover, the father of the nuclear-powered Navy.

Admiral Holloway served aboard destroyers in the North Atlantic and Pacific in World War II and flew fighter jets in the Korean War. He commanded the United States’ first nuclear powered aircraft carrier, the Enterprise, in the Vietnam War. After a stint at the Pentagon working on the Navy’s nuclear development program, he returned to Vietnam in 1972 as commander of the Seventh Fleet’s bombing raids over North Vietnam.

He was named chief of naval operations by President Richard M. Nixon, assuming the post in July 1974, then served under Presidents Gerald R. Ford and Jimmy Carter before retiring at the end of his four-year term, when the military was transitioning from the Vietnam War era to a focus on naval competition with the Soviet Union.

President Carter ordered a raid in late April 1980 to free the 52 hostages held in Iran since Nov. 4, 1979, after a revolt by Islamic fundamentalists that had forced the pro-American shah to flee the country.

Eight American helicopters took off from an aircraft carrier and flew toward a desert landing site in Iran while six transport planes, carrying 90 Army commandos, arrived at the site from Egypt.

The commandos were to board the helicopters, rescue the hostages and return with them the following night. But President Carter canceled the mission when two helicopters broke down on their way to the desert site and a third arrived with a broken oil pump. After the order came to stand down, eight servicemen were killed when a helicopter smashed into a transport plane that was refueling at the site.

Soon after the failed rescue mission, a six-member panel of senior active and retired military officers, led by Admiral Holloway, was assembled to report to the Joint Chiefs of Staff on the planning for the raid.

Its 78-page finding, made public in August 1980, was especially critical of command issues. By not utilizing an existing military command, it said, “the Joint Chiefs of Staff had to start, literally, from the beginning to find a commander, create an organization, provide a staff, develop a plan, select the units and train the forces.”

The Holloway panel called for the creation of a joint task force to bring counterterrorist forces of all the military services under a single command, a proposal that the Defense Department adopted.

The remaining hostages weren’t freed until Jan. 20, 1981, the day Ronald Reagan was inaugurated as president.

After leaving military service, Admiral Holloway was president and chairman of the Naval Historical Foundation and the author of “Aircraft Carriers at War” (2007).

He graduated from the Naval Academy in June 1942 in the first class of midshipmen whose curriculum was shortened to three years to speed the activation of officers for World War II.

At the time of his selection to succeed Adm. Elmo R. Zumwalt III as chief of naval operations, Admiral Holloway was described by The New York Times as “far less formal than his father,” whose “aristocratic demeanor prompted the nickname ‘Lord Jim.’”

James Jr. and James III became the only father and son to serve as four-star admirals in the Navy while on active duty.

Admiral Holloway’s survivors include his wife, Danby Rawlings Holloway, the daughter of an admiral, and his daughters Lucy Lyon and Jane Holloway. His son, James IV, died in an automobile accident in 1964 while he was a sophomore at the University of Virginia.

For all of Admiral Holloway’s contributions to modernizing the Navy, his memories of World War II remained vivid. In a 2014 interview with the Naval Historical Foundation, he told of his time as a gunnery officer on the destroyer Bennion during the Battle of Suragao Strait at Leyte Gulf in the Philippines in October 1944.

“I couldn’t suppress a gasp,” he said, remembering when he first caught sight of a Japanese battleship. He told of a “a cascade of flames” as American and Japanese ships were hit.

Later in the battle, he directed a torpedo strike against a large ship but wasn’t sure how effective it was. The after-action paperwork did not mention the Bennion’s strike, but long afterward a Naval War College researcher uncovered details of how it had helped sink the battleship Yamashiro.

By the time he retired after 36 years of Navy service, Admiral Holloway had received numerous citations, including four Navy Distinguished Service Medals, the Distinguished Flying Cross and the Bronze Star.