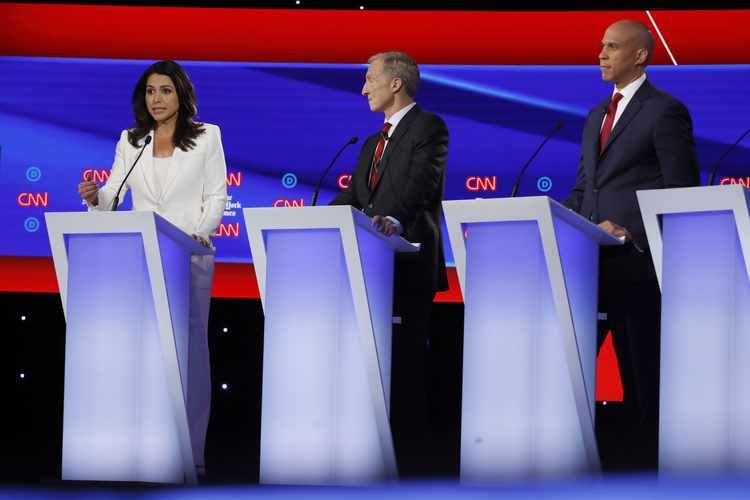 Listen to Tom Perez long enough, and the chairman of the Democratic National Committee inevitably has to address a question about the number of candidates competing for the party’s presidential nomination, a group that’s still growing even though it was supposed to have contracted more by now.

And that is when Perez pivots.

He has coached youth basketball for a long time, he will say, and no coach has ever told him, “Tom, I’ve got a problem: I’ve got too much depth on my team.”

Perez doesn’t think picking the next leader of the free world is exactly like youth sports. He has also clearly been practicing this pivot move for months. The question always comes up and, whether he is on television or caught in a scrum of reporters, he dishes out his go-to response.

But if the primary is a lot like basketball, is Perez afraid of an ugly intramural competition? After all, every team needs to pick a point guard; does he worry that other candidates could hamstring the eventual nominee?

“We have a great competition,” Perez told RealClearPolitics before the fifth primary debate, “and that will produce a battle-tested nominee.”

But none of the candidates on stage in Atlanta came any closer to establishing a claim to the nomination that night. What was supposed to be a high-stakes game turned into a breezy scrimmage without any real scuffles, and after two hours of mostly polite conversation and very little competition, Tom Steyer walked away with one conclusion.  “This race,” he told RCP, “is wide open.”

Another billionaire agreed: Three days later Michael Bloomberg declared his candidacy. The former New York mayor, currently the 14th richest man in the world, plans to spend as much as $500 million on the race. He already dropped $34 million on commercials that will soon flood airwaves across the country.

With his money and his centrism, Bloomberg threatens to upend the entire bench just weeks before the first ballots are cast, a scenario no one expected this late in the game.

The DNC deliberately set up rules to accommodate a sprawling field. They also designed a process, a senior party official told RCP, to ensure “a natural winnowing before we get to Iowa.” A two-step debate qualification system that required candidates to hit different fundraising and polling thresholds was meant to keep things fair, competitive, and reasonably quick. In short, it was meant “not to let this drag out.”

That was in April, and while candidates have exited and entered, the field hasn’t winnowed as much as foreseen. Former Vice President Joe Biden remains the national front-runner while newcomer Pete Buttigieg has unexpectedly risen steadily to fourth place with a relatively centrist strategy. Sens. Bernie Sanders and Elizabeth Warren compete for second and third from the far left. A dozen other candidates run in different directions.

All of this leaves some voters worrying that the eventual nominee won’t be well prepared for a one-on-one matchup with President Trump. Despite Perez’s “deep bench,” these voters been saying since June that they want cuts, not new candidates.

Bloomberg doesn’t find that polling convincing. If the electorate knew what it wanted, his thinking seems to go, they would have coalesced firmly around a few candidates by now. This is on brand for the wealthy New Yorker who made his money meeting a demand that other businesses didn’t see. The lesson, longtime Democratic pollster John Zogby told RCP, is “you never vote or bet against Mike Bloomberg.”

Conventional political wisdom doesn’t look favorably on the newest candidate; he will miss Iowa and New Hampshire to focus largely on delegate-rich California. This could give him a lane from which to score, and the party is nervous.

“I’m not saying anything that nobody isn’t already talking about,” Jack Rosen told RCP. “There is a great deal of angst in the Democratic Party. There are many moderates who are concerned about Bernie Sanders, Elizabeth Warren, and some of their policy ideas.”

The longtime Democratic donor, who hosted a September fundraiser for Biden at his Upper East Side home in Manhattan, thinks that progressives have sucked up a lot of the oxygen. Policy proposals such as “Medicare for All” and wealth taxes, he said, appeal to radical sensibilities but do not reflect the larger will of a more moderate electorate that can deliver the White House.

Those voters delivered the House majority last year to Democrats after Speaker Nancy Pelosi urged candidates to focus on so-called kitchen table issues “that matter most to all Americans.” And while that worked in 2018, farther-left candidates are pulling the party in their direction ahead of 2020.

“I think that has concerned the moderates,” Rosen told RCP. Though a Biden supporter, he welcomes the former mayor to the race and predicts it will help moderates whose “voices aren’t breaking through.” This kind of candidacy will serve as a corrective because “a brand-name like Bloomberg, with his ability to fund a national campaign immediately, can only elevate the moderate point of view.”

The failure of the party establishment created low barriers to entry in the first place. “Anything can happen, and anything did happen,” Zogby said of the last presidential election. No one expected Trump would triumph over a field of conventionally qualified, traditionally vetted Republican candidates. And the inverse happened on the left: Establishment juggernaut Hillary Clinton fended off insurgent challenger Sanders with the help of her party, only to lose in the end.

The new logic goes that if anyone, even Trump, can be president, and establishment gatekeepers are ill-suited to pick winners and losers, why not get in the race? That’s the calculus fueling the rookie campaigns of a tech executive, a self-help guru, the mayor of a mid-size town, and at least two billionaires. It is a diverse field of candidates that some find more than annoying. Biden’s campaign co-chair, Louisiana Rep. Cedric Richmond, complained to RCP that a crowded field crowds out a serious policy discussion, saying, “These debates are a clown show.”

And theatrics come with risks for the party. They delay unification ahead of the general election, a task that will be especially important and possibly difficult considering the wide gap between moderates and progressives. Unification might not come before next July — party brass are already talking openly about the possibility of nomination chaos at the Democratic National Convention.

Theatrics also could make the Democratic Party too democratic. As Zogby warned, “The will of the voters brought George McGovern and Walter Mondale.” Those two won out over the party establishment only to deliver historic losses.

Perez knows all of this, of course. But for now, he and other party officials say they trust in their bench and the system. They’ll soon find out if that trust was warranted. The start of the official winnowing – the Iowa caucuses – is only 68 days away.