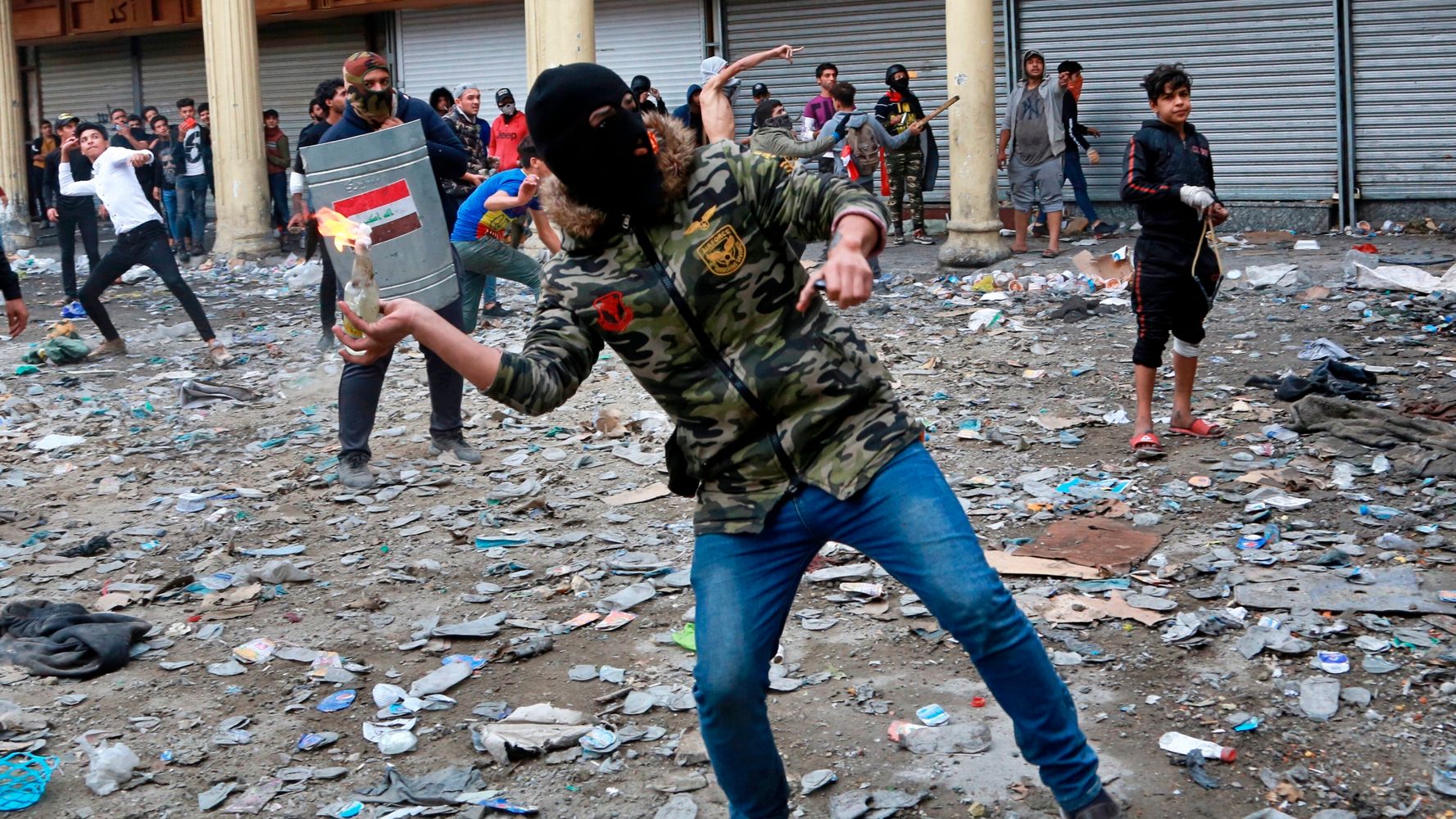 BAGHDAD (AP) — Security forces in Iraq shot dead 27 anti-government protesters in a 24-hour period, amid spiraling violence in the capital and the country’s south, as Iran condemned the burning of its consulate.

Violence across southern Iraq continued throughout the night, with security forces killing 23 protesters and wounding 165 since Wednesday evening. Protesters closed roads and police and military forces were deployed across key oil-rich provinces.

In Baghdad, protesters attempted to cross the Ahrar Bridge leading to the heavily fortified Green Zone, the seat of Iraq’s government, nearby. Protesters were occupying parts of three bridges – Jumhuriya, Sinak and Ahrar – all leading to the fortified area. Officials spoke on condition of anonymity in line with regulations.

Protesters had set fire to the Iranian consulate in the holy city of Najaf late Wednesday, in one of the worst attacks targeting Iranian interests in the country since the anti-government protests erupted two months ago. The Iranian staff were not harmed and escaped out the back door.

Anti-government protests have gripped Iraq since Oct. 1, when thousands took to the streets in Baghdad and the predominantly Shiite south. The largely leaderless movement accuses the government of being hopelessly corrupt and has also decried Iran’s growing influence in Iraqi state affairs.

Separately, the U.S. Embassy denounced a recent decision by Iraq’s media regulator to suspend nine television channels, calling for the Communications and Media Commission to reverse its decision. Thursday’s statement from the U.S. Embassy in Baghdad also condemned attacks and harassment against journalists.

Local channel Dijla TV had its license suspended Tuesday for its coverage of the protests, and its office was closed and equipment confiscated, according an official from one of the channels under threat. Other channels have been asked by the regulatory commission to sign a pledge “agreeing to adhere to its rules,” said the official, who requested anonymity out of fear of reprisal.

The Islamic State group also claimed responsibility for Tuesday’s coordinated bombings in three Baghdad neighborhoods, which killed five people. That was the first apparent coordinated attack since anti-government protests began. The bombings took place far from Baghdad’s Tahrir Square, the epicenter of weeks of anti-government protests that have posed the biggest security challenge to Iraq since the defeat of IS.

Tehran called for a “responsible, strong and effective” response to the incident from Iraq’s government, said Abbas Mousavi, a Foreign Ministry spokesman, in statements to Iran’s official IRNA news agency.

Iraq’s Ministry of Foreign Affairs condemned the torching of the consulate, saying it was perpetrated by “people outside of the genuine protesters,” in a statement, adding that the purpose had been to harm bilateral relations between the countries.

One demonstrator was killed and 35 wounded when police fired live ammunition to try to prevent them from entering the consulate building. Once inside, the demonstrators removed the Iranian flag and replaced it with an Iraqi one, according to a police official who spoke on condition of anonymity, in line with regulations.

A curfew was imposed in Najaf after the consulate was burned. Security forces were heavily deployed around main government buildings and religious institutions Thursday morning. The province is the headquarters of the country’s Shiite religious authority headed by Grand Ayatollah Ali al-Sistani.

Al-Sistani has been largely supportive of protester demands, siding with them by repeatedly calling on political parties to implement serious reforms to placate demonstrators.

Influential Shiite cleric Muqtada al-Sadr called on the government to resign “immediately to stop the bloodletting,” while also imploring protesters to maintain the peacefulness of their movement and punish and abolish those behind the violence to protect the reputation of their movement.

“If the government does not resign, this will be the beginning of the end of Iraq,” he warned. Al-Sadr, who has supported the protests, also categorically denied that his supporters were involved in the attack against the Iranian consulate in Najaf.

The consulate attack comes after days of sit-ins and road closures with protesters cutting access to main thoroughfares and bridges with burning tires. Protesters have also lately targeted the state’s economic interests in the south by blocking key ports and roads to oil fields.

In the oil-rich province of Nasiriyah, 23 protesters were killed overnight and 165 wounded by security forces who fired live ammunition to disperse them from a key bridge, security and medical officials said Thursday. Demonstrators had been blocking Nasr and Zaitoun bridges leading to the city center for several days. Security forces moved in late Wednesday to open the main thoroughfare. The officials spoke on condition of anonymity in line with regulations.

By Thursday afternoon, special forces were transferred from neighboring Najaf and Diwanieh provinces to Nasiriyah to contain the violence, security officials said.

Amnesty International denounced the violence, calling it a bloodbath that “must stop now.”

“The scenes from Nasiriyah this morning more closely resemble a warzone than city streets and bridges. This brutal onslaught is just the latest in a long series of deadly events where Iraqi security forces meted out appalling violence against largely peaceful protesters,” said Lynn Maalouf, Middle East research director for the rights groups.

In Basra, security forces were deployed in the city’s main roads to prevent protesters from staging sit-ins, with instructions to arrest demonstrators if they tried to block roads.

Protesters had brought traffic in the oil-rich province to a halt for days by burning tires and barricading roads.