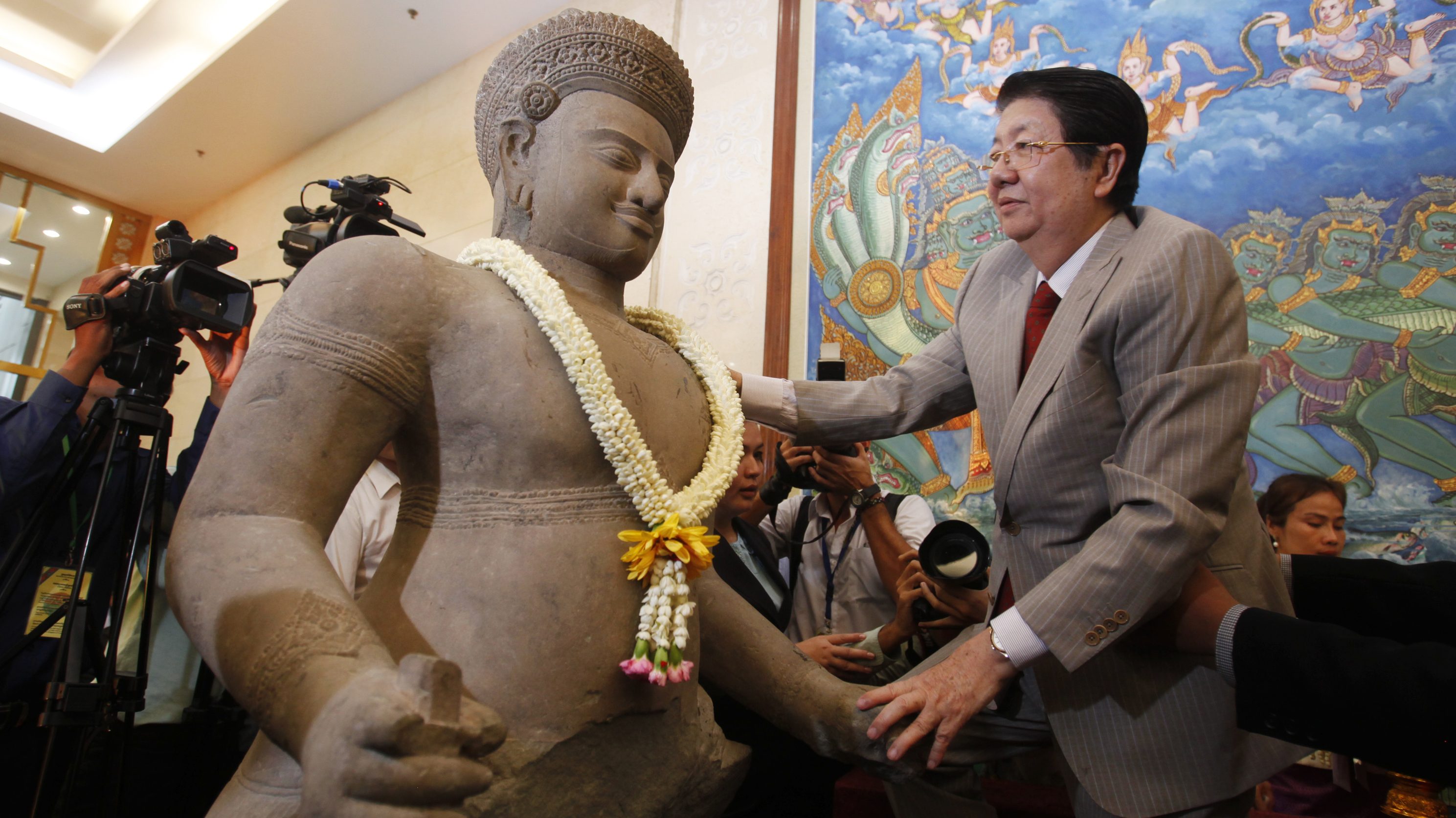 A prominent art dealer has been charged in US federal court on charges related to “trafficking in stolen and looted Cambodian antiquities.”

In an indictment unsealed this week, Douglas Latchford is accused of carrying out a long-running “fraudulent scheme to sell looted Cambodian antiquities on the international art market, including to dealers and buyers in the United States.” Latchford, 88, is considered one of the world’s leading authorities on Southeast Asian art, and has provided major museums, dealers, and auction houses with Cambodian antiquities.

Latchford, a dual citizen of Thailand and the UK, also goes by the Thai name Pakpong Kriangsak. Prosecutors say he persistently concealed the fact that the artifacts were “the product of looting, unauthorized excavation, and illicit smuggling” by creating false provenance histories, invoices, and shipping documents for the pieces.

Latchford was honored by the Cambodian government in 2008 for his work, having donated valuable relics and money to the country’s national museum. Three books on Khmer art co-authored by Latchford are “foundational reference works for experts,” according to the New York Times.

“Over the course of his lengthy career, Latchford continued to act as a conduit for recently looted Cambodian antiquities,” the indictment says, with Latchford’s alleged crimes dating back at least four decades. It was in the early 1970s that he began supplying an unidentified auction house in the UK with looted Khmer antiquities. In 2010, Sotheby’s put up for sale one of the pieces Langford sold to the UK auctioneer years earlier. Sotheby’s asked Latchford to help verify the provenance of the piece, a 10th-century stone figure called the Duryodhana. He said he obtained the figure in London in 1970, when in fact he had illegally smuggled it from Cambodia in 1972, prosecutors charge. Latchford then changed his story, claiming he had never owned the Duryodhana at all.

After a complaint from the Cambodian government, Sotheby’s pulled the Duryodhana from the auction block. A court battle over its ownership ensued, after which the statue was returned to Cambodia in 2013. That same year, New York City’s Metropolitan Museum of Art returned two statues linked to Latchford to Cambodia that were smuggled out of the country during the nation’s civil war in the early 1970s.

At the beginning of 1996, Cambodia enacted the Law on the Protection of Cultural Heritage, which forbade the excavation, looting, and improper export of antiquities, declaring “movable cultural property found by chance” to be the property of the Cambodian public. Cambodia is also a signatory to multiple international cultural protection agreements. A US embargo was placed on imports of Cambodian antiquities in 1999. To that end, included in the indictment are excerpts from emails US investigators uncovered between Latchford and his associates, which reveal multiple instances of purported wrongdoing.

In 2006, for example, Latchford sent the same dealer an email marked “PRIVATE AND CONFIDENTIAL ——– FOR YOUR EYES ONLY.” Attached was a photo of a bronze head Latchford said “was recently found around the site of the Angkor Borei group in the N E of Cambodia, in the Preah Vihar area. They are looking for the body, no luck so far, all they have found last week were two land mines !! What price would you be interested in buying it at? let me know as I will have to bargain for it.”

To hide the origins of his looted pieces, Latchford is said to have forged letters of provenance from an unwitting art collector who was not in on the scheme, claiming he acquired them in the late 1960s. In 2000, authorities say Latchford sold a 12th-century stone Khmer sculpture to an unnamed museum in Colorado, providing a phony letter from the collector that said he sold the piece to Latchford several years earlier. However, Latchford also provided the museum with records showing he had actually taken possession of the sculpture in 1994. The “false collector,” as prosecutors explain in the indictment, died in 2001, but Latchford “continued to provide numerous provenance letters purportedly provided by the False Collector, while claiming, falsely, that the False Collector was still alive.”

He frequently declared the pieces were from the UK or Laos, rather than Cambodia, according to the indictment, and described them as figures from the 17th or 18th century.

Latchford “remains at large, residing in Thailand,” say prosecutors. It is unknown if they will attempt to extradite Latchford, who is reportedly in poor health, to the United States. If convicted on all counts, Latchford faces nearly 30 years in prison.