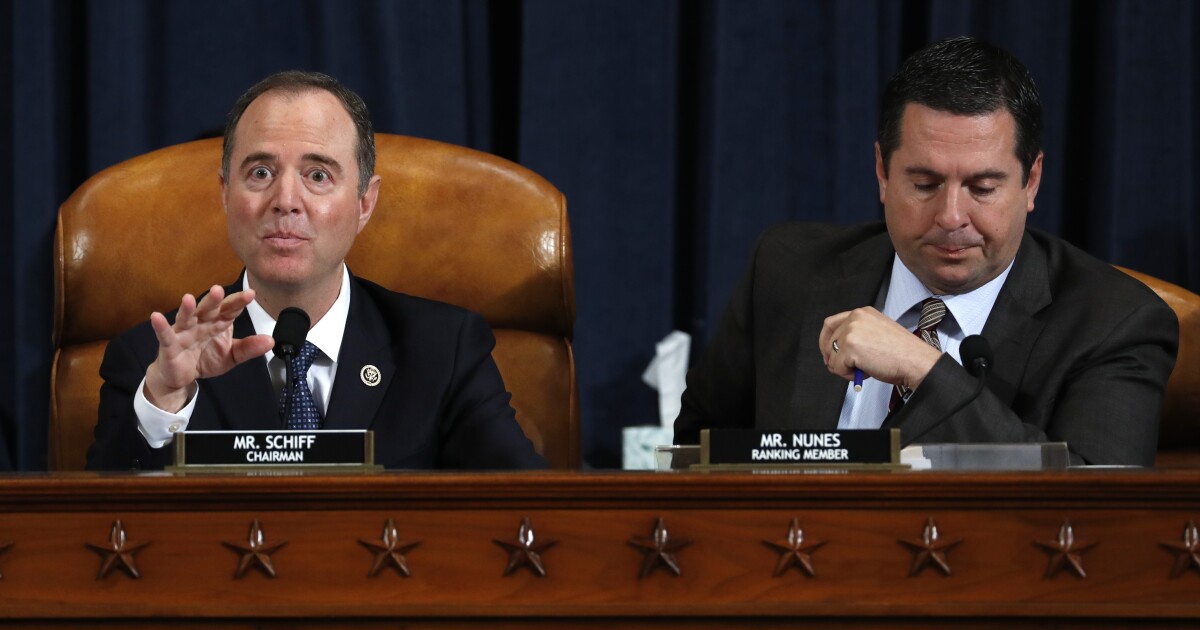 Two weeks of public hearings have done little to change Americans’ minds about whether Congress should impeach President Trump over his dealings with Ukraine — the nation remains sharply divided, much as it has been since Trump’s election.

That’s the finding of three new polls conducted either entirely or mostly after the hearings and released Monday and Tuesday.

The news provides a mixed message for both parties: There’s no sign that Republican support for Trump has significantly cracked. If that support continues, Republican senators would be very unlikely to vote to convict Trump if impeachment reaches a Senate trial next year, as seems increasingly likely.

At the same time, the claim Trump made on Twitter on Monday that support for impeachment “is dropping like a rock, down into the 20’s in some Polls” is clearly untrue.

There’s also no indication that Democrats have suffered any political downside from impeachment, the way Republicans did two decades ago when they went after then-President Clinton.

Overall, the public narrowly favors impeaching Trump and removing him from office, the new polls indicate.

None of those findings are significantly changed from polls those organizations took before the hearings.

The polls show that the belief that Trump acted inappropriately is shared more widely than support for impeachment.

Asked whether Trump abused his powers as president, for example, voters in the Morning Consult survey said, 49% to 35%, that he did. Belief that some of Trump’s actions were inappropriate appears to have climbed a bit over the last month, even though support for impeachment has not.

On the decision to impeach, Americans are increasingly rallying to their partisan sides and dug in to their views, the polls found.

In the CNN poll, for example, 90% of those on either side of the impeachment divide said they felt strongly” about their view. The YouGov poll found that 86% of Democrats favor impeaching Trump, while 85% of Republicans oppose it.

Democrats are particularly unified on the issue — large majorities of Democrats say they believe the evidence shows Trump pressured Ukrainian officials to investigate former Vice President Joe Biden and his family, that Trump did so to help himself politically, and that his conduct was impeachable.

Republicans are somewhat more divided, at least on whether Trump’s conduct was proper.

The CNN poll found, for example, that about a third of Republicans said there would be nothing inappropriate about asking the Ukrainians to investigate the Bidens, while nearly half said that would be inappropriate, but not an impeachable offense.

While the hearings may not have changed many minds, a lot of people say they watched at least parts — 40% said so in the YouGov polls, with an additional 38% saying they either watched highlights of the hearings on TV or read coverage. About 1 in 5 Americans, however, said they hadn’t heard anything about the hearings.

Among the witnesses, two stood out as particularly memorable, YouGov found: Marie Yovanovitch, the former U.S. ambassador to Ukraine who was forced out because of a smear campaign launched by Trump’s lawyer, Rudolph W. Giuliani; and Gordon Sondland, the U.S. ambassador the European Union. A majority of people polled said they remembered seeing or hearing them. Fewer recalled the other 10 witnesses.

Regardless of how Americans feel about impeaching Trump, the polls continue to show tepid support, at best, for reelecting him.