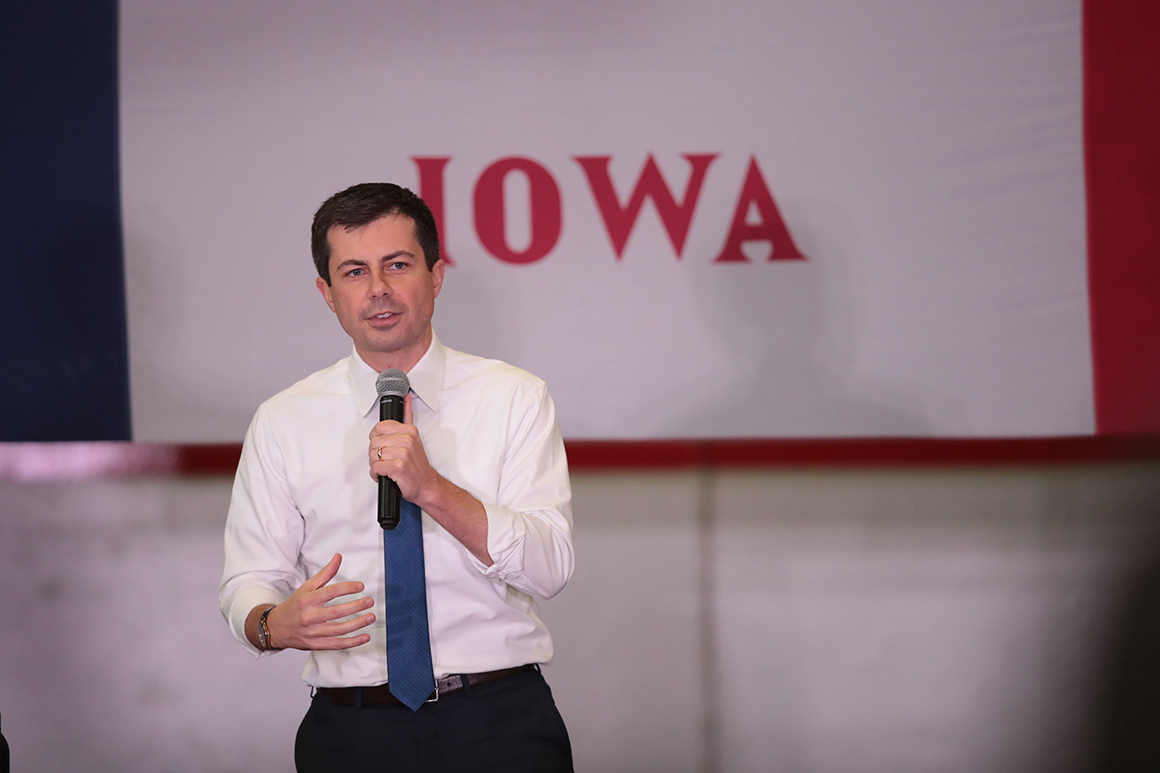 Buttigieg and his campaign have argued that his rocket ride to the top of the Democratic primary field in Iowa bears an uncanny resemblance to Obama’s trajectory in 2007. Back then, Obama surged in the final months in Iowa to win the caucuses — a victory that helped convince black voters in South Carolina of his campaign’s viability.

During his speech at the Iowa Liberty-Justice Dinner in early November — a breakthrough event for Obama in 2007 — Buttigieg sought to reminded attendees of the similarities between the two hopefuls.

Describing himself as “a young man with a funny name,” he purposely mimicked the language Obama, from the earliest days of his national political career, used to refer to himself. His voice that evening was also a few octaves lower, booming at the end of every word in the same way Obama’s does in big speeches.

The speech even incorporated Obama’s thematic touches — high-minded promises of a better future and cautions about the dangers of party disunity.

Ahead of that speech, Larry Grisolano, one of the Buttigieg campaign’s senior advisers and the director of paid media and opinion research for the Obama campaign in 2007, authored a fundraising pitch to supporters titled, “The parallels between 2007 and 2019.” Grisolano’s appeal described how Buttigieg is “rekindling the same excitement I felt at this time in 2007.”

“On a November evening, at what was then called the ‘Jefferson-Jackson Dinner,’” Grisolano wrote in the email. “Barack Obama took a stage in Des Moines, Iowa and presented Americans with a passionate appeal for a new vision that instilled hope for the future and led to a surge in support for his campaign.”

When asked on his campaign bus this month whether he was comfortable with comparisons to the former president’s campaign, Buttigieg answered cautiously, but in the affirmative.

“No two candidates are the same,” he said. “But at the same time, I think there are some rhymes that are worth paying attention to.”

“There are some real parallels particularly with the excitement on the ground and crowds that are showing up even in smaller, rural, more Republican areas,” Dan Pfeiffer, a former Obama communications staffer for the Obama campaign who would eventually become White House communications director, said. “The parallels are real, but imperfect. In 2008, our campaign had a very specific plan and path to build on an Iowa win. Obama had high name ID and high approval rating among African-American voters in South Carolina and across the country, we believed an Iowa win could cause a shift in support among that cohort.”

Buttigieg has worked to improve his standing among black voters. He has repeatedly pointed to the campaign’s Douglass Plan — a set of proposals to help African Americans — attended black churches and met with black leaders across the country, including Al Sharpton.

He’s also appeared on the popular Breakfast Club radio show multiple times and plans a post-Thanksgiving tour of North Carolina and South Carolina with black voter outreach as the focus.

Still, his progress has been halting. On Tuesday, Buttigieg was forced to respond to a backlash surrounding his 2011 comment that children from poor, minority neighborhoods struggle in school because they lack role models.

His remarks did “not reflect the totality of my understanding then, and certainly now,” Buttigieg explained.

“[T]here does certainly look to be [an Obama] parallel in terms of the trajectory and the polling,” said South Carolina state Sen. Marlon Kimpson. But he noted that Obama had some key attributes that can’t be replicated.

“His racial background, his professional and social background, and his ability to communicate and inspire. And I don’t say that to demean Mayor Buttigieg. He’s really an intriguing figure and has great promise,” Kimpson said. “But he’s not Obama. And I would say that about the candidates and have said that about the other candidates. So yes, you can compare the math, but there was a lot more to his trajectory and ultimately prevailing in South Carolina than just the math alone. Any cursory view of his speeches you can see that.”

Some Obama alums pointed out that the criticism of Buttigieg’s youth and relative inexperience, as well as the mayor’s unfamiliarity to members of Congress, sounds familiar. But a former Obama staffer who worked for a rival campaign this year said he strongly disagreed with the Obama-Buttigieg comparisons.

“It definitely offends me personally just because Obama had made serious outreach to communities of color and even though they may have been skeptical initially and really only rallied to him once he proved that he could win over white voters, there was still lots of outreach and focus and care taken to those communities in a way that I think has been very heavy handed and perfunctory at best with Pete’s campaign,” the former Obama staffer, who requested anonymity to speak candidly, said.