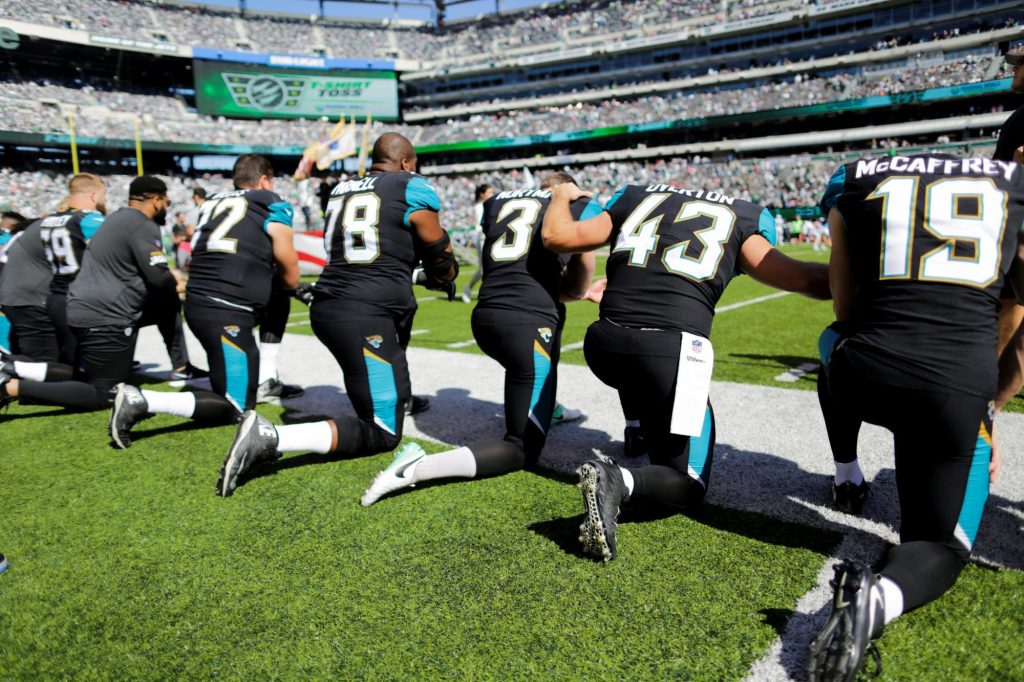 In America, there’s a significant kind of public insistence that one’s “freedom” is fundamentally tied to one’s wealth.

Much of the country views America through an aspirational and transformative lens, a colorblind and bias-free utopia, wherein wealth conveys equality and acts as a panacea for social and racial ills. Once an individual achieves massive financial success, or so the message goes, he or she will “transcend” the scourge of economic and racial inequality, truly becoming “free.”

Working in parallel with this reverence for this colorblind version of the “American Dream” is the belief that economic privilege mandates patriotic gratitude. Across industries and disciplines, Americans are told to love their nation uncritically, be thankful that they are exceptional enough to live in a country that allows citizens the opportunity to reach astronomical heights of economic prosperity.

For the nation’s black citizens, there’s often an additional racialized presumption lurking under the surface of these concepts: the notion that black success and wealth demands public silence on systemic issues of inequality and oppression.

One’s economic privilege is a lousy barrier against discrimination and oppression.

These are durable and fragile ideologies that prop up the concept of the American Dream – durable because they are encoded in the very fabric of American culture (most Americans, including African Americans, have readily embraced these ideologies as assumed facts); yet fragile because it’s all too easy to see that one’s economic privilege is a lousy barrier against both individual and systemic discrimination and oppression.

Consequently, black people have also been among the most vocal challengers of these ideologies, as we’ve seen most recently with the Colin Kaepernick and the NFL #TakeAKnee demonstrations. In a show of solidary with the free agent quarterback, professional football players – the vast majority of whom are black – have been kneeling during the National Anthem as a means of protesting racial injustice and police brutality.

WATCH: NFL players team up in defiance and solidarity

Over the past few weeks, the president of the United States has brought renewed attention to the inherent tensions that define the ideologies of the “American Dream” through his repeated public criticisms of these kneeling NFL players.

“If a player wants the privilege of making millions of dollars in the NFL, or other leagues,” Trump recently tweeted, he or she should not be allowed to kneel. Labeling the protestors actions “disrespectful” to the country, flag and anthem, President Donald Trump has called for players to be fired, encouraged a boycott of the NFL, insisted that the league pass a rule mandating that players stand for the anthem and derided the protestors as “sons of bitches.”

In a dramatic ploy more befitting of a scripted reality television show, the president gloated that he had instructed Vice President Mike Pence to walk out of an Indianapolis Colts game the moment any player kneeled. This was an orchestrated show of power and outrage, designed to send a flamboyant political message given that Trump and Pence knew in advance that on that particular day, the Colts were playing the San Francisco 49ers – the team that currently has the most protestors. The NFL’s announcement this week that the league has no plans to penalize protesting players is the most recent event to provoke the president’s fury; taking to social media during the early morning, he once again equated kneeling with “total disrespect” for our country.

As many have pointed out, the president’s moralizing outrage toward the NFL players is selective and deeply flawed – his apparent patriotic loyalty hasn’t stopped the billionaire politician from criticizing the removal of Confederate statues, or attacking a Gold Star family, or mocking Sen. John McCain’s military service.

By aggressively targeting the NFL players, Trump believes that he is “winning the cultural war,” having made black “millionaire sport athletes his new [Hillary Clinton].”

The NFL players and their defenders have repeatedly stated that the protests are intended to highlight racial inequality and oppression. They’ve also explained that their decision to kneel emerged from a desire to protest peacefully and respectfully after a sustained conversation with military veterans.

Trump has chosen to ignore these rationales and the structural issues of inequality that motivate the protests and instead, advance a narrative exclusively concerned with overt displays of American patriotism and the “privilege” of the NFL players. As one of president’s advisors explained, by aggressively targeting the NFL players, Trump believes that he is “winning the cultural war,” having made black “millionaire sport athletes his new [Hillary Clinton].”

It’s a cynical statement, revealing the president’s perception of the jingoism of his base of supporters who envision him as a crusader for American values and symbols.

In casting the black protestors as the antithesis of all of this, Trump has marked the players as unpatriotic elites and enemies of the nation. For a president who has consistently fumbled his way through domestic and foreign policy since he was elected, a culture war between “hard-working” and “virtuous” working-class and middle-class white Americans and rich, ungrateful black football players is a welcome public distraction.

Trump’s attacks on the NFL protestors are rooted in those competing tensions inherent to the American Dream: that wealth equals freedom; that economic privilege demands patriotic gratitude; and most importantly, that black people’s individual economic prosperity invalidates their concerns about systemic injustice and requires their silence on racial oppression.

Among the protestors’ detractors, this has become a common line of attack, a means of disparaging the black NFL players’ activism by pointing to their apparent wealth. The fact that systemic racism is demonstrably real and that individual prosperity does not make one immune to racial discrimination appears to be lost on the protestors’ critics.

Theirs is a grievance that suggests that black athletes should be grateful to live in this country; that racism can’t exist in America since black professional athletes are allowed to play and sign contracts for considerable sums of money; that black players owe the nation their silence since America “gave” them opportunity and access; that black athletes have no moral authority on issues of race and inequality because of their individual success; and that black athletes’ success was never theirs to earn, but instead, was given to them and can just as easily be taken away.

Black athletes have long been hyper-aware of their peculiar place in American society: beloved for their talents, yet reviled the moment they use their public platform to protest.

This culture war being waged over black athletes is not new. Black athletes – and entertainers – have long been hyper-aware of their peculiar place in American society as individuals beloved for their athletic and artistic talents, yet reviled the moment they use their public platform to protest systemic racial inequality. The parallels between the #TakeAKnee protests and the protests of Muhammad Ali or John Carlos and Tommie Smith are readily apparent; so too are there important similarities to the case of Paul Robeson.

An outspoken civil rights activist, collegiate and professional football player, lawyer, opera singer and actor, Robeson had his passport revoked in 1950 because of his political activism and speech – actions that all but destroyed his career. The star athlete and entertainer, “who had exemplified American upward mobility” quickly “became public enemy number one” as institutions cancelled his concerts, the public called for his death and anti-Robeson mobs burned effigies of him.

During a 1956 congressional hearing, the chairman of the House Committee on Un-American Activities beat a familiar refrain with Robeson, challenging the entertainer’s accusations of American racism and racial oppression. He saw no sign of prejudice, he argued, since Robeson was privileged, having gone to elite universities and playing collegiate and professional football.

Black athletes, even the silent ones, largely understand that their economic privilege doesn’t insulate them from the realities of racial discrimination. They also understand that their wealth and success is precarious and is often dependent not only upon their athletic performance, but also upon them remaining silent on issues of racial injustice, especially those that appear to question the “American Dream” or implicate the American public by association.

It should come as no surprise then that Colin Kaepernick, whose protests turned him into a national pariah despite his on-the-field talents, has filed a grievance against the NFL, accusing the league and its teams of blackballing him because of his political beliefs. “Principled and peaceful political protest,” Kaepernick’s lawyers argued in a statement, “should not be punished and athletes should not be denied employment based on partisan political provocation by the Executive Branch of our government.” Whether the ostracized Kaepernick will win his grievance is unknown, but it is certainly telling that he and his lawyers have rooted their claims in contested definitions of freedom and the precarious economic privilege of outspoken NFL players.

For the loudest and most vocal critics of black protestors, in particular, outspokenness is tantamount to treason, grounds for the harshest of punishments. Perhaps they would benefit from a close reading of James Baldwin, who once argued: “I love America more than any other country in this world, and, exactly for this reason, I insist on the right to criticize her perpetually.”