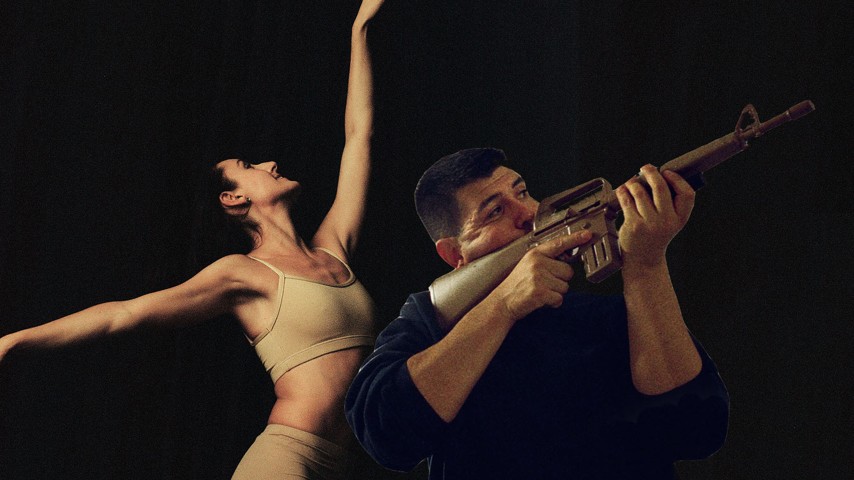 “Keep your fingers straight and off the trigger. Do not point the rifle at anyone you do not intend to shoot.” That’s Roman Baca, a U.S. marine and Iraq War veteran. But he’s not speaking to the company of soldiers he led during his tour as a sergeant in Fallujah, Iraq. Here, Baca is instructing a company of ballet dancers.

In the riveting short documentary Exit 12: Moved by War, directed by Mohammad Gorjestani in collaboration with Even/Odd and Square, Baca shares the story of his remarkable transformation from a veteran with PTSD to a choreographer who helps others heal from the trauma of war through dance.

“We were trained to be aggressive to survive,” Baca says in the film. “But we were also among civilians that you’re trying to help. How [can] you be a marine in a war zone and a human being at the same time? That created a lot of conflict inside of me.”

After Baca’s tour in Iraq ended in 2006—he was an anti-tank missile-assault man, machine gunner, and fire-team leader—he had difficulty readjusting to life as a civilian. Anger, depression, and anxiety consumed him. He feared that his wife would leave him. Instead, she encouraged him to start a dance company. Exit 12 quickly became an emotional ballast for Baca, who was classically trained as a dancer before enlisting as a marine. His powerful choreography embodies the experience of war.

Gorjestani first encountered Baca’s work through an image taken at an Exit 12 performance. The photograph showed two female dancers wearing abayas—the Iraqi version of the hijab—alongside male dancers clad in military fatigues. “The juxtaposition was striking, full of tension, and frankly strange,” Gorjestani told me. “I’d never seen that before.”

While filming Exit 12: Moved by War with Baca, Gorjestani learned how a soldier is molded into a machine of war. “Starting with boot camp, it happens through posture, movements, and a physical reprogramming of the mind and spirit,” Gorjestani said. “It’s like you tie a knot, but [when you return from war] you don’t undo it.” Baca believes that a veteran has to physically untie that knot to begin healing.

To facilitate this process, the dance company holds workshops for active-duty and retired veterans, with the goal of encouraging expression through movement. “I saw the power of this idea firsthand by watching the workshops,” Gorjestani said, “and became convinced of it after speaking to many of the veterans who have participated. I think this film, and Roman’s work, is a powerful reminder that spoken language is just one way of communicating.”

“Dance injects the consideration and humanity back into the body,” Baca says in the film. “There’s a liberating energy to it … It’s a sort of deprogramming.”

Perhaps because it’s so hard to talk about war, Baca believes that service members are often misunderstood. “You can’t put a veteran in a box and say this is what they are,” the choreographer says in the film.

Gorjestani agrees. “We only have two polarized versions of veteran stories in America,” he said. “There are stories that unashamedly glorify the war experience, and postwar PTSD stories.” The latter, Gorjestani said, often portray the veteran as a kind of ticking time bomb. “There’s a vast middle ground between those two extremes that, I think, represents a majority of veterans.”

After an award-winning festival run and an acquisition by Fox Searchlight, this film is now being considered in the Academy Awards race.