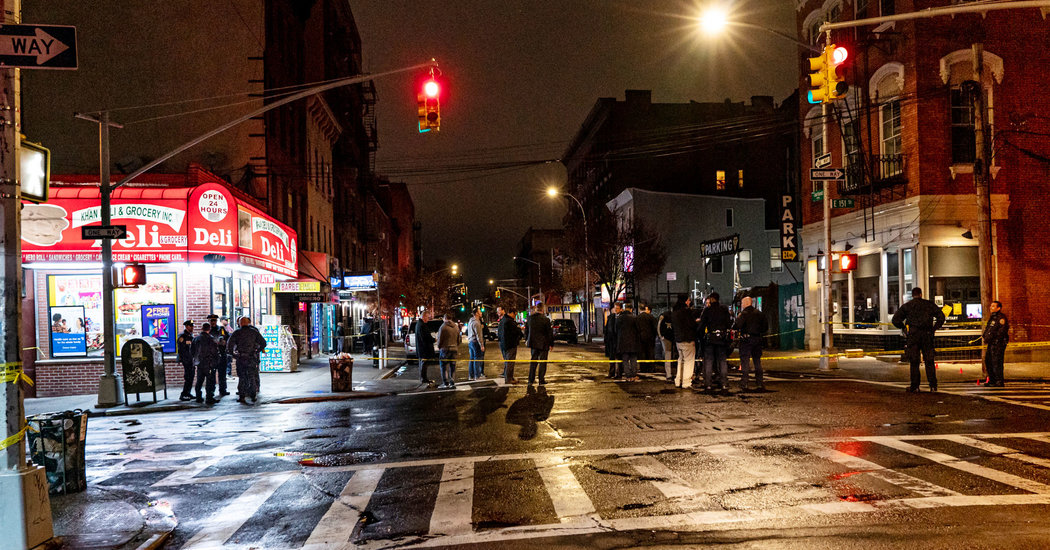 Five people, including two boys, ages 10 and 14, were shot in the Bronx on Wednesday by a man firing into a crowd, the police said. The hail of bullets caused chaos on a block with stores, a day care center and students headed to after-school classes the day before Thanksgiving.

None of the injuries sustained by those who were hit in the shooting, on Courtlandt Avenue near East 151st Street in the Melrose neighborhood, were life threatening, the police said. The other victims were two women, ages 35 and 19, and a 20-year-old man, the police said.

Four of the five were taken to Lincoln Medical Center in the Bronx, fire officials said. The 10-year-old went separately to Harlem Hospital Center in Manhattan, the police said.

No arrests had been made by Wednesday night, according to the police, who described the gunman as a man in his 20s wearing a black jacket who ran east toward Melrose Avenue.

“We’re praying for the swift recovery of the five people — including two children — struck by gunfire in the Bronx tonight,” Mayor Bill de Blasio said on Twitter.

Adam Lin, the manager of Courtlandt Wine & Liquor, on Courtlandt Avenue near 151st Street, said he had heard gunfire in the area before, but he thought the noise he heard just before 4 p.m. on Wednesday was from a construction project nearby.

“I wasn’t sure until I saw the crowd in the street and people ran into my store,” Mr. Lin said, standing in the store’s doorway shortly after 7:30 p.m. Behind him, a worker wearing disposable blue gloves mopped blood off the floor.

Mr. Lin said that about a half-dozen people rushed into the store after he heard the gunfire and that a woman in the group told him three of them, including “a little boy,” had been hit. They were screaming and “seemed scared,” Mr. Lin said. Someone in the group called out, “He’s my brother,” he added.

Mr. Lin said the police had arrived as he was calling 911.

William Polson, who works at a deli up the block, said he saw three people, including a boy, taken out of the liquor store on stretchers. Mr. Polson said that an ambulance took a fourth person, a man who had been lying on the curb, away.

Michael Kamber, who runs the Bronx Documentary Center at the corner of Courtlandt Avenue and East 151st Street, said that staff members were about to teach after-school classes to middle- and high-school students when they heard the gunfire.

Mr. Kamber, a photojournalist who once worked for The New York Times on contract, was out of town at the time of the shooting. But he said he was unfortunately not surprised to hear what had happened.

“There has been a big ramp up in violence and drug activity in the last six months,” he said, adding that crime in the neighborhood was “as bad as I’ve seen it” in the eight years since he opened the center.

Mr. Kamber also expressed frustration over what he called police officials’ failure to do more to combat the problem as he and other community leaders have asked.

The neighborhood is in the 40th Precinct, a section of the South Bronx that is two and a half square miles and that includes the Mott Haven neighborhoods. The precinct has traditionally had among New York City’s highest rates of serious crime, which the police largely attribute to rival gangs fighting for control of the area’s dense concentration of public housing complexes.

So far this year, the precinct has experienced fewer serious crimes overall than it did in the comparable period last year, with shootings specifically down, according to the most recent police data.

From 2014 to 2017, the precinct bucked a citywide trend of declining crime. And even as crime in the area dropped over the past two years, the 40th Precinct still ranks No. 4 among the city’s 77 precincts for the total number of serious crimes.

Mr. Kamber said there was “not a lot of comfort” to be found in the Police Department’s statistics. That the injuries caused by the shooting were not life threatening did not provide him with much solace, either.

“That’s just luck,” he said. “Every bullet has its own trajectory. We might not be so lucky next time.”