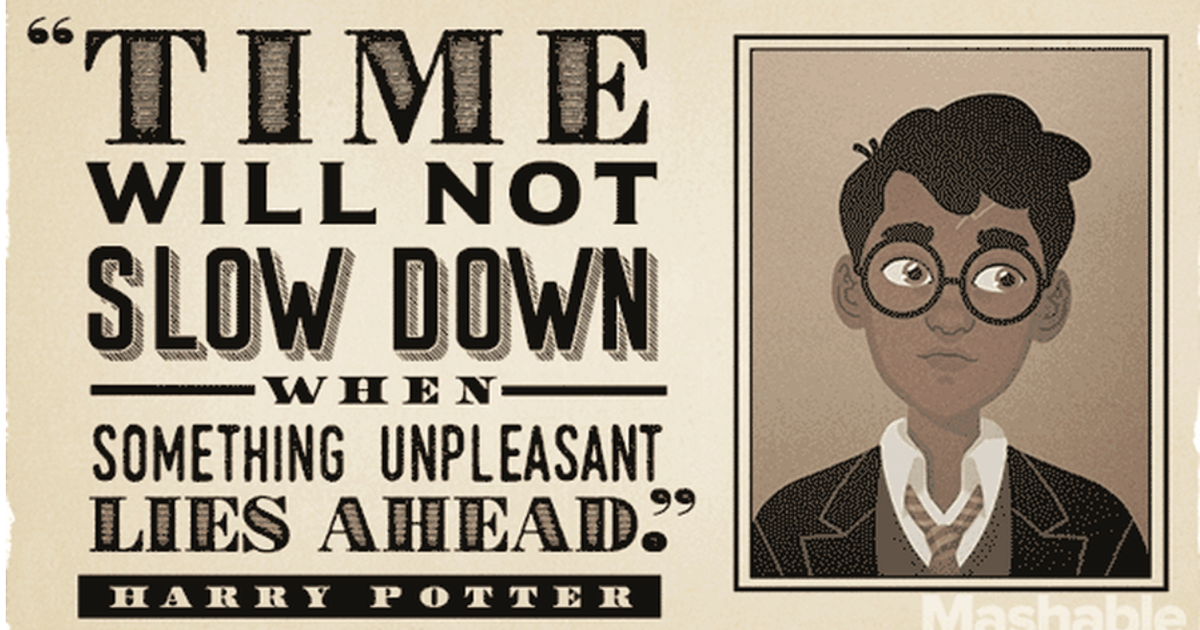 It’s been 22 years since the release of J.K. Rowling’s inaugural novel Harry Potter and the Sorcerer’s Stone (and 10 since she put the book series to rest with Harry Potter and the Deathly Hallows). Throughout the seven books, audiences became accustomed to the immensely empathetic knowledge possessed by so many of Rowling’s sincere characters.

And though most us don’t face the same exact situations that characterized Harry’s time at Hogwarts School of Witchcraft and Wizardry, the series’ many insights can help guide us through whatever tribulations we’re facing out here in the Muggle world.

Covering an array of subjects, from identity, purpose, and generosity to love and the slim boundary between life and death, here are the 15 most influential life lessons tucked into the pages of the beloved book series.

15. Albus Dumbledore to Harry in The Half-Blood Prince

After Dumbledore essentially tells off the Dursleys for mistreating Harry for his entire childhood, he informs them of the magical protection he placed on their house for the time that Harry lived there. They’re dumbfounded, and Dumbledore wastes no time ushering Harry out of the house to begin their fateful journey back to Hogwarts. Dumbledore’s all-knowing optimism sets the tone for the rest of his interactions with Harry throughout the sixth book.

“Let us step into the night and pursue that flighty temptress, adventure.”

14. Rubeus Hagrid to Harry, Ron, and Hermione in The Goblet of Fire

After it becomes widely known that Hagrid’s mother was a giantess, a very ashamed Hagrid attempts to resign from Hogwarts. Dumbledore refuses to accept Hagrid’s resignation, and Harry, Ron, and Hermione tell Hagrid they, too, want him to return to teaching. During a tender moment in Hagrid’s cabin, Hagrid explains his parents’ — and his own — philosophy on self-acceptance.

“I am what I am, an’ I’m not ashamed. ‘Never be ashamed,’ my ol’ dad used ter say, ‘there’s some who’ll hold it against you, but they’re not worth botherin’ with.'”

13. Albus Dumbledore to Harry in The Sorcerer’s Stone

Nicolas and Perenelle Flamel lived for 600 years thanks to the Elixir of Life provided to them by the sorcerer’s stone. But after Voldemort comes dangerously close to stealing the stone and its powers, the couple decide it’s best they finally lay themselves to rest. Dumbledore explains their decision to a very bewildered Harry.

“To the well-organized mind, death is but the next great adventure.”

12. Harry, in thought, in The Goblet of Fire

As Harry rides the Hogwarts Express on his journey back from school after his fourth year and the dire Triwizard Tournament, he dreads disembarking from the train, having to say goodbye to his friends, and returning to the drabness that is the Dursley’s home and the Muggle world.

“Time will not slow down when something unpleasant lies ahead.”

11. Sirius Black to Ron and Hermione in The Goblet of Fire

As Sirius, Hermione, Ron, and Harry discuss the suspicious behavior of Barty Crouch before they discover he used the polyjuice potion to disguise himself as Mad Eye Moody, Sirius gifts the trio with a nugget of important knowledge about human nature.

“If you want to know what a man’s like, take a good look at how he treats his inferiors, not his equals.”

10. Albus Dumbledore addressing the Great Hall in The Sorcerer’s Stone

After awarding Harry, Hermione, and Ron points for their respective courage, logic, and chess-playing skills in battling Voldemort for the sorcerer’s stone, Dumbledore makes recognizes Neville Longbottom for his ability to stand his ground against Harry, Ron, and Hermione when they tried to sneak out of the Gryffindor common room to foil Voldemort’s plan.

9. Albus Dumbledore to Harry in The Deathly Hallows

Moments before Harry finally kills Voldemort once and for all, Dumbledore urges him to not hesitate or overthink the prospect of ending another human’s life. Dumbledore’s rationale is that by killing Voldemort, Harry is actually saving countless lives in the process.

“Do not pity the dead, Harry. Pity the living, and, above all those who live without love.”

8. Albus Dumbledore to Harry in The Sorcerer’s Stone

After Dumbledore catches Harry staring into the Mirror of Erised to see himself with his late parents, Dumbledore cautions Harry against spending time hoping for what could — or in Harry’s case, cannot — be.

“It does not do to dwell on dreams and forget to live.”

7. Albus Dumbledore to Harry in The Half-Blood Prince

As Harry and Dumbledore venture across the lake Voldemort has directed them to so Harry and Voldemort can face off as two parts of the same evil soul, Harry spots dead bodies floating in the water and is very frightened. Dumbledore sagely instructs Harry to examine what it is that scares him about death.

“It is the unknown we fear when we look upon death and darkness, nothing more.”

6. Luna Lovegood to Harry in The Order of the Phoenix

The bulk of Luna’s possessions are lost or stolen during her fifth year at Hogwarts, and Harry catches her searching for her things while the feast marking the end of the school year rages on in the Great Hall. Harry inquires why she isn’t attending, and then offers to help Luna find her stuff. She declines his offer, however, and gifts Harry with wisdom about the meaninglessness of worldly possessions and the assurance that everything always turns out right in the end.

“I’ll just go down and have some pudding and wait for it all to turn up … It always does in the end.”

5. Albus Dumbledore to Harry in The Half-Blood Prince

In explaining to Harry how and why Voldemort assigned Harry to be a horcrux, Dumbledore lays out the weaknesses of all those who usurp an immense amount of power and use it for their own gain. Dumbledore both proves to Harry that Harry is one of Voldemort’s greatest threats, and describes a political truth relevant to life outside the book series.

“Have you any idea how much tyrants fear the people they oppress? All of them realize that, one day, amongst their many victims, there is sure to be one who rises against them and strikes back!”

4. Albus Dubmledore to Harry to The Prisoner of Azkaban

After Harry mistakes his reflection and patronus for his late father, Harry admits to Dumbledore his embarrassment in thinking he saw his dad. Dumbledore reassures Harry that he shouldn’t be embarrassed, because those we’ve lost live on within us.

“You think the dead we loved ever truly leave us? You think that we don’t recall them more clearly than ever in times of great trouble?”

3. Harry, in thought, in The Half Blood Prince

Dumbledore enlightens Harry that the prophecy and the fact that Harry had been marked as “the chosen one” means that Harry is the only being capable of killing Voldemort. More than that, Dumbledore intuits that Harry won’t rest until he has done so. Harry realizes the nuance in Dumbledore’s distinction between those who merely possess the ability to do something and those who see it as their duty.

“It was, he thought, the difference between being dragged into the arena to face a battle to the death and walking into the arena with your head held high. Some people, perhaps, would say that there was little to choose between the two ways, but Dumbledore knew — and so do I, thought Harry, with a rush of fierce pride, and so did my parents — that there was all the difference in the world.”

2. Albus Dumbledore to Harry in The Chamber of Secrets

While coming down from his battle with Tom Riddle and the basilisk in the Chamber of Secrets, Harry fears the similarities between his immense powers and that of Voldemort. However, Dumbledore assuages and disproves Harry’s fears that Harry might become evil one day by explaining that one’s intentions are the bedrock of one’s identity, not one’s capabilities.

“It is our choices … that show what we truly are, far more than our abilities.”

1. Albus Dumbledore to Harry in The Goblet of Fire

After the fatal events of the Triwizard Tournament, Harry is exhausted and traumatized. Dumbledore asks Harry to recap his interactions with Voldemort inside the tournament arena, but Sirius interjects that Harry needs to rest and that the interrogation can continue in the morning. Dumbledore disagrees, and persuades Harry to face his most recent horrific experience head on.

“Numbing the pain for a while will make it worse when you finally feel it.”