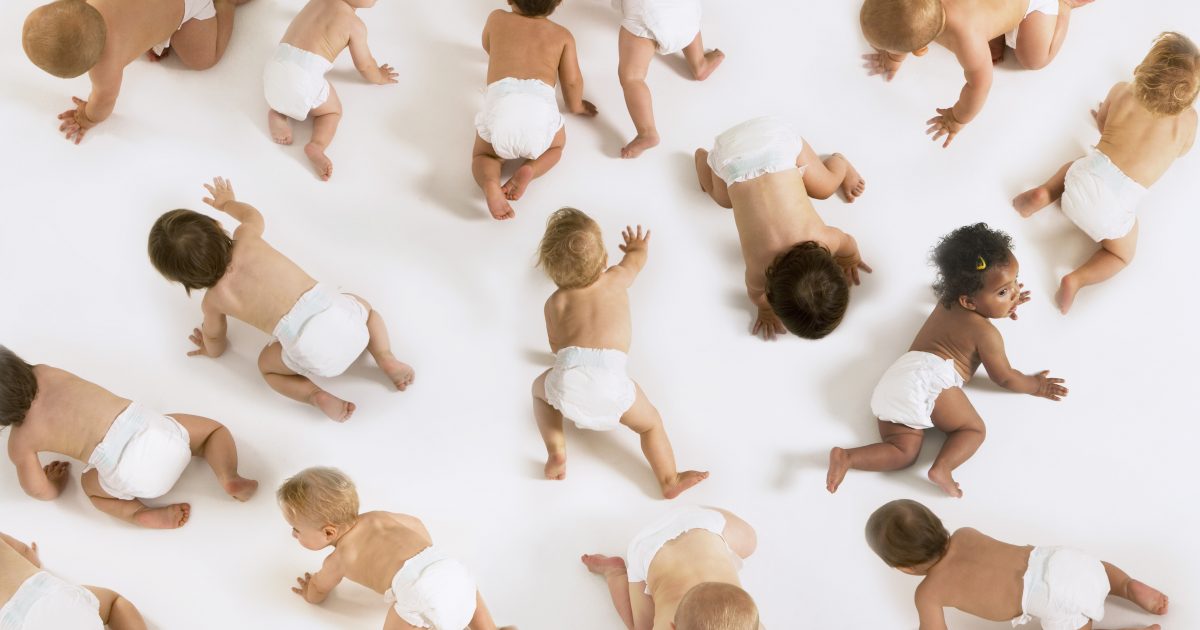 The U.S. total fertility rate (TFR) has dropped to below 1.73 births per woman according to a new report from the National Center for Health Statistics (NCHS). This record low edges out the previous U.S. fertility nadir of 1.74 births per woman back in 1976.

The NCHS notes that the TFR for the U.S. in 2018 remained below replacement, the level at which a given generation can exactly replace itself (usually defined as 2.1 births per woman). In addition, the TFR was below replacement for all race and Hispanic-origin groups in 2018, except for Pacific Islanders. Overall, the U.S. TFR has generally been below replacement since 1971.

In general, American women of all races are having children later in life. In the 1960s, the mean age for a mother’s first birth was 23.3 years. The new report notes that for all ethnic groups, the mean age of mothers at first birth has been rising and has now reached a national average of 26.9 years.

U.S. fertility rates appear to be following the downward below-replacement trend seen in other developed countries. For example, the overall TFR for the 28 countries in the European Union is just under 1.6 births per woman; Japan’s is at 1.4 births; Australia’s is at 1.74 births, and Canada’s is 1.5 births. Why are fertility rates falling around the world?

In my book, The End of Doom, I reported on how the life prospects of women shape reproductive outcomes, as analyzed in a fascinating 2010 article in Human Nature, “Examining the Relationship Between Life Expectancy, Reproduction, and Educational Attainment.” In that study, University of Connecticut anthropologists Nicola Bulled and Richard Sosis divvied up 193 countries into five groups by their average life expectancies. In countries where women could expect to live to between 40 and 50 years, they bear an average of 5.5 children, while those countries with female life expectancies between 51 and 61 average 4.8 children. The big drop in fertility occurs at that point. Bulled and Sosis found that when women’s life expectancy rises to between 61 and 71 years, total fertility drops to 2.5 children; between 71 and 75 years, it’s 2.2 children; and over 75 years, women average 1.7 children.

As global average life expectancy rose from 52.6 years in 1960 to 72.4 years now, the global total fertility rate has fallen from 5 births per woman in 1960 to 2.4 births now. Average global life expectancy is projected to exceed 77 years by 2050. If Bulled and Sosis’s insights continue to hold, global TFR should fall to around 1.7 births per woman by then. As noted in the NCHS report, U.S. TFR has been below replacement since 1971, which, as it happens, is exactly the year that average life expectancy for American women reached 75 years.

Is falling fertility a bad thing? Obviously not for those still benighted folks worried about a supposedly exploding population bomb.

However, earlier this month there was a lot of anxious handwringing about falling fertility rates in the New York Times opinion article, “The End of Babies.” According to the op-ed’s author, Anna Louie Sussman, the culprit responsible for falling fertility rates is “late capitalism.” She doesn’t mean “just the economic system, but all its attendant inequalities, indignities, opportunities, and absurdities—[have] become hostile to reproduction. Around the world, economic, social, and environmental conditions function as a diffuse, barely perceptible contraceptive.”

Sussman does acknowledge that declining fertility “reflects better educational and career opportunities for women, increasing acceptance of the choice to be child-free, and rising standards of living.” Nevertheless, she blames employers and governments for failing to make parenting and work compatible. To her credit, Sussman begins by noting the vast array of pro-natalist policies mandated in Denmark including 12 months’ paid family leave for new parents, highly subsidized daycare, and state-funded in vitro fertilization for women under 40 years of age. And yet Denmark’s TFR is just 1.7 births per woman, almost exactly the same as that of the U.S.

Modernity, a.k.a, late capitalism, clearly offers people a multitude of life options that compete with the bearing and rearing of children. Evidently the trade-offs between work, travel, socializing, entertainment, sports, and parenting that people are making reduce fertility. Attempts to skew trade-offs toward more childbearing may have some effect—Denmark’s fertility rate rose from 1.4  in 1983 to 1.7 births per woman now—but in no developed country so far have pro-natalist policies sustained fertility above the replacement rate.

We do know, however, what policies do sustain high fertility rates: Low incomes, low education levels, high levels of violence, defective rule of law, extensive corruption, lack of property rights, and despotic government. I doubt that even the most ardent pro-natalists would advocate a reversion to Malthusian hell-holes as a way to boost fertility.

The upshot is that modern people considering their options are voluntarily choosing to have fewer children. Freedom of choice is a good thing.