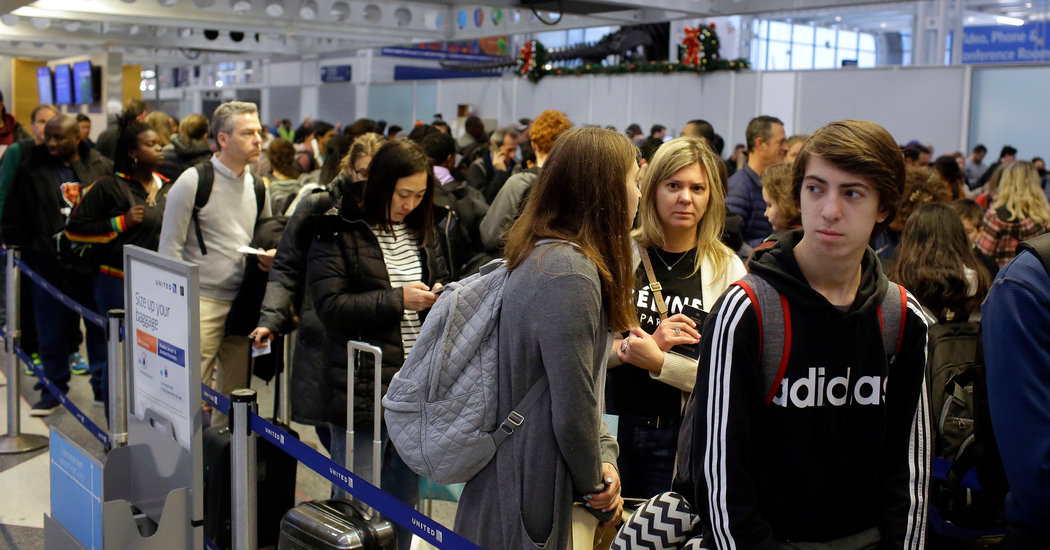 From a “bomb cyclone” in the Northwest to a powerful storm moving over the Great Lakes, a vast area of the United States was paralyzed by severe weather just ahead of Thanksgiving.

The two separate storm systems have choked transportation across the center of the nation, bringing 30 inches of snow in some areas and causing closed interstates and hundreds of canceled flights.

They were weakening and expected to drop less snow on Wednesday and Thursday, but holiday travel issues will likely continue into the weekend, according to the National Weather Service.

More than 55 million people were expected to fly or drive out of town during one of the busiest travel weeks of the year. At least, that’s how many had hoped to.

“Plan for plenty of extra time,” said Brian Hurley, a forecaster at the Weather Prediction Center in College Park, Md.

Parts of the Midwest were blanketed by heavy snow.

The Twin Cities saw a new daily snowfall record set on Wednesday, with more than seven inches at the Minneapolis-St. Paul airport, the Weather Service in the Twin Cities announced. The previous record, of nearly five inches, was set in 1983.

The winter storm also arrived as a fire broke out at an apartment building in Minneapolis that killed at least five people and displaced many other residents.

The Midwestern storm system was moving through the Great Lakes on Wednesday, and expected to cause another six or so inches of snow in surrounding areas. Then it will head toward central Maine, Mr. Hurley said.

Parts of the Upper Midwest and Chicago were likely to see high winds and a cold front, he said.

A ‘bomb cyclone’ pummeled the Northwest with hurricane-force winds.

Heavy snows and whipping winds hit the Northwest overnight, in what the National Weather Service called a “historic, unprecedented” storm, unlike any that had hit the region since the 1960s. It was believed it would qualify as a bomb cyclone, a designation given when barometric pressure drops by at least 24 millibars in 24 hours.

Winds reached 106 m.p.h. on Tuesday near Cape Blanco, Ore., with sustained winds of 85 m.p.h., exceeding the 74 m.p.h. definition of hurricane force. Travelers were encouraged to stay off the roads, with as much as a foot of snow blanketing Northern California and Oregon.

The storm was weakening as it moved over central Oregon on Wednesday, Mr. Hurley said. It had left several feet of snow in mountainous areas, and could bring an additional one to four inches to parts of Utah, Nevada and Idaho, that don’t normally see much snow, he added.

“The thing about this storm is it’s got such a broad reach,” he said.

Snow closed part of a major highway in Northern California.

In Northern California, a 100-mile stretch of Interstate 5, between Yreka and Redding, was closed in both directions on Wednesday because of the snowfall, according to the state’s transportation department. The department said that a number of cars had spun out along the road and had to be removed. Wednesday could bring rain and thunderstorms to the area, forecasters said.

Denver is digging out.

Denver International Airport returned to normal on Wednesday morning after heavy snowfall in the area on Monday and Tuesday. “Today will be a busy day at DEN!” the airport said on Twitter, directing travelers to arrive two hours before their flights.

Colorado saw a wide range of snowfall totals from the storm. The town of Drake, about 30 miles north of Boulder, saw 33 inches of snow, while Bayfield, in the state’s southwest, saw just one inch, according to the Seather Service.

Tornados touch down in Mississippi and Louisiana.

While parts of the country are battling rain and snow that will affect travel on Wednesday, tornadoes touched down in Mississippi and Louisiana on Tuesday night, according to Alan Campbell, a meteorologist for the National Weather Service in Jackson, Miss.

At least two tornadoes hit the Franklin and Madison parishes of Louisiana and two more hit in Rankin County, Miss., Mr. Campbell said on Wednesday. There were no deaths or injuries reported in any of the areas affected by tornadoes as of late Wednesday morning, according to sheriff departments there.

There were reports of downed trees, downed power lines and damaged homes in some areas, he said, but the worst of the weather might have passed. Mr. Campbell said he did not expect to see any more tornado activity as people begin traveling Wednesday.

Power is out for many in Missouri and Illinois.

High winds in Missouri and Illinois led to power failures for about 13,000 people, according to a local news report and a Wednesday morning report by Ameren, an electrical company servicing the area. The National Weather Service in Weldon Spring, Mo., issued a high wind warning that would remain in effect until 3 p.m. local time.

Winds were expected around 30 m.p.h., with gusts of up to 60 m.p.h., threatening to bring down trees and power lines.

Parades are in danger in the Northeast.

Showers and thunderstorms were expected from the Southeast to the Mid-Atlantic on Wednesday, with heavy snow expected in northern New England and parts of Maine later in the week.

Winds of 30 m.p.h. or more were expected in Boston and other areas of New England, and rain and snow were likely to increase in the afternoon and evening.

High winds could put Thanksgiving parades at risk, including the annual Macy’s parade in New York City. City regulations forbid the famous mega-sized balloons from flying when there are sustained winds above 23 m.p.h. or gusts above 34 m.p.h.

Mr. Hurley said the latest forecast showed that wind gusts in New York City on Thursday could go up to 40 m.p.h., with sustained winds in the 15 to 25 m.p.h. range.