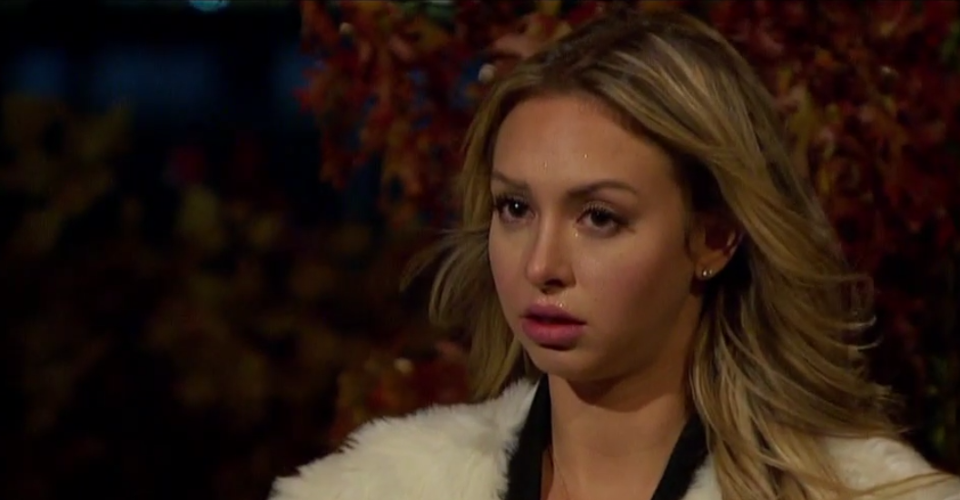 What was doubly striking about Corinne’s departure, though, was that she used the show’s elaborate farewell ritual to contradict The Bachelor’s dynamic stasis: While being broken up with by Nick and, by extension, Bachelor Nation, Corinne demonstrated that, against all odds, she had grown. As a person! Sort of! (I’d use another Bachelorism here, but of course, for this kind of thing, there is none.)

The Bachelor’s traditional departure scene—Woman, Weeping Alone in a Limo—typically involves the said-goodbye-to contestant crying, wiping away mascara-tears, and discussing how much she wants—really, how ready she is—to “find love.” Not so Corinne. The woman who had spend the season defying the show’s long-established norms had one more trick up her faux-fur-covered sleeve. Corinne, Weeping Alone in a Limo, told the show’s invisible cameras not about how sad she was, but instead about … how changed she was. The season’s villain and cipher and punchline and living, breathing conspiracy theory used her final moments within the Bachelor spotlight to talk about what she had taken away from her experience on the show. She used them to talk not about The Journey, but about her own.

It went like this: Nick did not call Corinne’s name at the New York City-based Rose Ceremony. He walked her out to the limo. “I’m sorry,” she told him, as they embraced. “I’m sorry if I ever did anything to make you upset.”

Corinne stepped into the limo. The traditional departure ritual began. She wept, as plaintive piano notes surrounded her. “Saying goodbye to Nick,” she told the camera, “is like, I feel like my heart is like, literally like—it’s never going to be repaired. I just want to feel loved—the way it’s supposed to be, like the normal way.”

It was all standard-issue Bachelor stuff, right down to the invocation of “the normal way” … until things—as they so often will when Corinne is involved—took a turn. “I’m trying to, you know, say things that men think are appropriate,” she said, as her tears gave way to a slow smile. “And you know what? I’m done. Done trying to show my men how much I worship them and I love them and I care for them and I support them. I need that! So if someone feels that way about me? They can come and tell me. And they can bring a ring to go along with it.”

It was … feminist? Sort of? It was also inflected with Corinne’s characteristic self-absorption and materialism, yes—and the probable result of some liberal editing, with that quick shift from weeping to grinning—but still. Corinne, with this, was rejecting the stuff of all those Cosmo stories offering advice on How to Please Your Man—and the stuff, for that matter, of a culture that tends to assume that women, and women alone, should do the work of making sure that men feel supported, and cherished, and, indeed, “worshipped.” Corinne had spend her season of The Bachelor myopically—even maniacally—focused on Nick. She had been, in Bachelorese, There for Nick and There for the Right Reasons and Not There to Make Friends. And in the end, if the aim is to be the woman before whom Nick “gets down on one knee,” it had all failed.