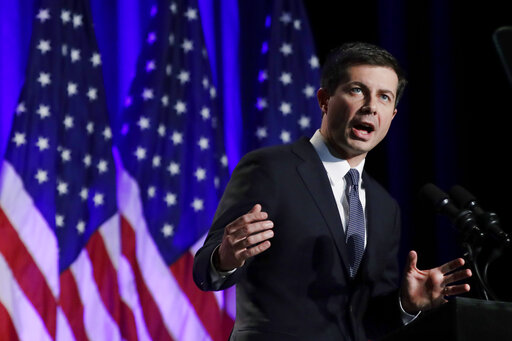 Pete Buttigieg is on the defense about his standing with black voters, claiming that despite attacks from rivals about his record, support from black voters in his Indiana hometown increased when he sought re-election as mayor.

CNN’s Abby Phillip earlier this month asked Buttigieg, mayor of South Bend, to weigh in on Julián Castro’s dig that Buttigieg has a bad record with African Americans.

“That’s false,” Buttigieg said. “Look, our city has had a lot of challenges, but the black voters who know me best returned me to office and supported me more the second time around than the first.”

Census data shows that about a quarter of South Bend’s population is black or African American alone. Buttigieg and Castro, a former Housing and Urban Development secretary, are among the nearly 20 candidates seeking the Democratic nomination for president in the 2020 election. Black voters historically have overwhelmingly voted for Democrats and are expected to have major influence in many of the Democratic primaries, particularly in South Carolina.

PolitiFact wondered if Buttigieg was right that he got more black voters to support him when he ran for re-election in 2015 than when he first ran for mayor in 2011.

We sought input from political scientists, and they told us that the mayor’s claim is problematic to evaluate due to differences in the field of candidates, district boundary changes from one election year to the other, and lack of information on the race of voters. Experts also said they were not aware of any city-wide public opinion polls capturing support for Buttigieg by race and ethnicity.

Given the comparison challenges outlined by experts, we won’t rate this on the Truth-O-Meter. But here is an overview of our findings based on limited and imperfect data.

Buttigieg’s campaign said his claim centered on the results of primary elections, not general elections, arguing that primary elections in South Bend are more contested than the general ones. Several political scientists in Indiana told us they agreed with that assessment.

“The winner of the Democratic primary is virtually guaranteed to be elected in contemporary South Bend citywide elections,” said Bernard L. Fraga, an associate professor of political science at Indiana University.

South Bend election results data is not broken down by race, Buttigieg’s campaign said. So it pointed to data for South Bend’s 2nd District, a predominantly black district.

But changes in the number of candidates running and in the demographics and geographic base of the primary contenders “likely play a large role here and makes a direct comparison between 2011 and 2015 particularly difficult,” Fraga said.

For instance, there were four other candidates running in the 2011 primary, and only one challenger in the 2015 primary.

Districts were also redrawn between the 2011 and 2015 elections as a result of the 2010 U.S. Census. The result was three fewer precincts in the 2nd District in 2015 compared with 2011. So, for the sake of comparison, it would be better to conduct a precinct-level analysis than it would a district-level analysis. But even the precinct-level study is an “imperfect approach,” experts told us.

“It is difficult to measure support among black voters based on election statistics because Indiana does not track race or ethnicity as part of the official voter file,” said Elizabeth Bennion, a political science professor at Indiana University-South Bend.

Also problematic is that media outlets and polling agencies do not conduct scientifically-valid exit polls during municipal elections (as is done with presidential elections), Bennion said.

Politico in July published an analysis of detailed precinct results for South Bend’s 2011 and 2015 mayoral races and found Buttigieg “repeatedly lagging in contests against black primary challengers in many of western South Bend’s predominantly black neighborhoods.” Buttigieg won those precincts in the general elections against Republican candidates, who were also white, but support for him there dropped after his first term, Politico reported. (Politico developed a methodology for the story that adjusted vote counts and Census population estimates to account for precinct boundary changes.)

In its report on the May 2015 primary, the South Bend Tribune said that while Buttigieg won the election, “his support in some districts, primarily the predominantly black areas on the west side, proved to be lukewarm.” The report did not make comparisons with 2011 results.

In one precinct in the 2nd District — which Census data showed was about 70% black — Buttigieg got 52 votes, while his challenger got 163 votes, the South Bend Tribune reported. Buttigieg’s 2015 primary challenger was the council member representing the city’s 2nd District, Henry Davis Jr., who is black.

The 2015 South Bend Tribune article said Buttigieg continued to face fallout from a controversy regarding the demotion of the city’s first black police chief and related police tapes. Politico also cited as a potential sticking point with black voters community frustrations over the slow pace of Buttigieg’s initiative to revitalize neighborhoods spotted with abandoned buildings. The same story also suggested that Buttigieg’s sexual orientation might have presented a barrier for some.

Kareemah Fowler, who won the primary for city clerk and had Buttigieg’s endorsement, then told the South Bend Tribune that Buttigieg wanted to show he was making an effort with black voters. “Pete has a lot of things to do right now to regain their trust,” she said.

Buttigieg said, “the black voters who know me best returned me to office and supported me more the second time around than the first.”

The campaign pointed to numbers that showed increased support in one district, but that data is not precise for a comparison from one election to the other. Political scientists also cited significant electoral differences in both races which make a comparison of support challenging.

Based on the available data, we cannot conclusively say whether Buttigieg’s claim is correct, and neither can he.