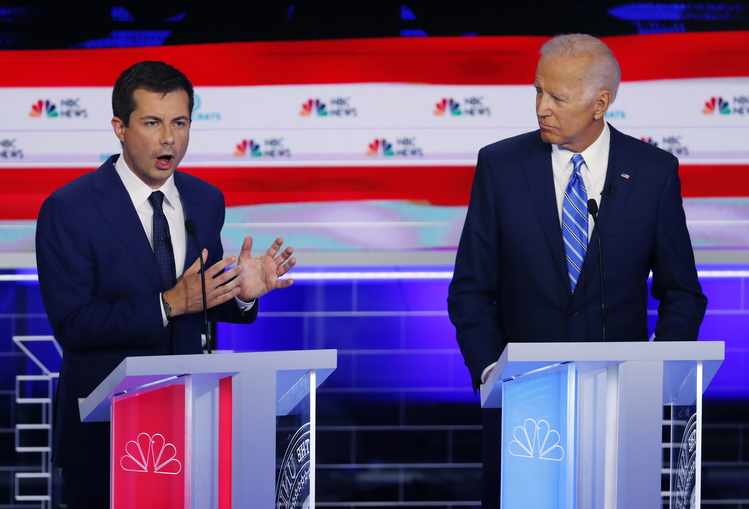 Pete Buttigieg has reason to be thankful. According to the RealClearPolitics polling average, the mayor of South Bend, Ind., now leads in Iowa with 24% support and in New Hampshire with 20%.

Only weeks away from those states’ February contests, this is the first time he’s led in both races. Perhaps even more significant, Joe Biden has slipped to fourth place in New Hampshire with just 13%. The former vice president has seen a softening in his overall support, and though he remains the national front-runner, he has been stuck in fourth place in Iowa at 16%.

Buttigieg’s rise is noteworthy for a young, gay Midwestern mayor who has never won a  statewide race. It is also a stark reminder to anyone who would dismiss the upstart candidate. Solid showings in each of the Democratic debates combined with consistent, relative centrism have marked his standing as a contender with momentum.

In what surely is a campaign-messaging move, Buttigieg will spend Thanksgiving away from the campaign trail to go deer hunting with his husband’s father in rural Michigan.

Biden has remained focused on two other early-voting states, Nevada and South Carolina. He leads both of them by healthy margins, a fact that his campaign regularly spotlights for reporters as the election calendar advances. After a Thanksgiving with his family, Biden will board a bus for an eight-day road trip in Iowa.

An ascending Buttigieg and struggling Biden in the Hawkeye and Granite states shows just how fluid the race remains. Early leads fuel fundraising and fire up supporters — though they do not guarantee success. Sen. Elizabeth Warren learned this lesson recently. She led in Iowa and New Hampshire before dropping to third in both states. And while Biden can look south and west to anticipated success, Warren was expected to have something of a home field advantage in New Hampshire where voters share a media market with the progressive’s home state of Massachusetts.

The candidate shuffle seems to have favored Sen. Bernie Sanders. Statistically tied for second place with Warren nationally, he is within striking distance of Buttigieg in both Iowa with 18.3% and New Hampshire with 17%. The self-described democratic socialist underwent a heart procedure last month, raising questions about his health and political longevity. But he seems to have allayed concerns and has not lost his standing in the contest’s top tier.

Below those four leaders are more than a dozen other candidates still clawing and scraping for advantage. Despite seemingly long odds, the sprawling field that was expected to contract by now has only expanded in recent weeks.

Sensing blood — and voter dissatisfaction — in the water, Mike Bloomberg entered the race and brought his billions with him. The former mayor of New York City declared his candidacy last week. But unlike the other candidates competing for a leg up in Iowa and New Hampshire, the wealthy Democrat will look west to delegate-rich California, which votes on March 3 as part of the Super Tuesday slate.

Political flux has provided Bloomberg his opportunity. Voters picked from three candidates at the ballot box in the last Democratic primary. This time, they will have five times as many choices. Operatives and pollsters say that an “over choice” situation could make a national name brand like Bloomberg appealing, though betting markets are more skeptical.

Candidates are always rising and falling in American politics, however, and perhaps never more so than in this era. After Donald Trump overthrew established orthodoxy, pollsters and operatives are quick to remind reporters, and the public, that anything can happen.